'The President Was Frustrated.' Here's Why Attorney General Barr Believes Trump Did Not Obstruct Justice

Special Counsel Robert Mueller documented at least 10 episodes in which President Donald Trump may have obstructed justice during investigations of his campaign and Russian meddling in the 2016 election.

But Attorney General William Barr said Thursday morning that he did not believe Trump met the legal standard for obstruction of justice, in large part because he had other motivations for his actions.

“There is substantial evidence to show that the President was frustrated and angered by a sincere belief that the investigation was undermining his presidency, propelled by his political opponents, and fueled by illegal leaks,” he said.

Mueller’s report is not yet public, but critics have long charged that Trump may have obstructed justice when he fired FBI Director James Comey, reportedly threatened to fire Special Counsel Robert Mueller, dictated a misleading statement to the New York Times on behalf of his son and regularly attacked prosecutors, threatened potential witnesses and praised allies.

But the legal standard to prove obstruction of justice is a high bar, requiring prosecutors show a “corrupt intent” behind the actions, and Barr argued in a press conference before the report came out that the standard had not been met.

In the report, Mueller declined to make a traditional law enforcement decision on whether Trump had obstructed justice, but Barr and Deputy Attorney General Rod Rosenstein then determined that he had not, informing Congress of their decision in late March.

Barr gave several reasons for this decision: 1) he and Rosenstein disagreed with Mueller’s legal theories on some of the episodes, 2) Trump’s state of mind during the investigation gave him other motivations than “corrupt intent” and 3) Trump otherwise cooperated with the investigation.

In spite of their disagreements with Mueller over legal interpretations, Barr said he and Rosenstein still found the evidence fell short.

“Although the deputy attorney general and I disagreed with some of the special counsel’s legal theories and felt that some of the episodes examined did not amount to obstruction as a matter of law, we did not rely solely on that in making our decision,” Barr told reporters.

Barr also argued that it was important to understand the context of Trump’s behavior.

“President Trump faced an unprecedented situation,” he said. “As he entered into office, and sought to perform his responsibilities as President, federal agents and prosecutors were scrutinizing his conduct before and after taking office, and the conduct of some of his associates. At the same time, there was relentless speculation in the news media about the President’s personal culpability.”

Read More: The 270 Arguments Trump Has Made About the Russia Probe

He added: “At the same time, the President took no act that in fact deprived the Special Counsel of the documents and witnesses necessary to complete his investigation. Apart from whether the acts were obstructive, this evidence of non-corrupt motives weighs heavily against any allegation that the President had a corrupt intent to obstruct the investigation.”

Democratic presidential candidates were unhappy with Barr’s remarks during the press conference.

“It’s a disgrace to see an Attorney General acting as if he’s the personal attorney and publicist for the President of the United States,” tweeted Massachusetts Sen. Elizabeth Warren.

Sen. Bernie Sanders said it was clear Trump “wanted nothing more than to shut down the Mueller investigation” in a tweet.

“AG Barr’s press conference was a farce and an embarrassing display of propaganda on behalf of President Trump. Barr works for the people, not the president.,” tweeted Sen. Kristen Gillibrand.

Sen. Cory Booker said in a statement that Barr “undermined a two-year investigation by going out of his way to frame the evidence in a light most favorable to the President” and called for Mueller himself to testify in front of Congress.

“Barr made clear this morning that he is more concerned about protecting the President than protecting the independence of the Special Counsel’s investigation,” Booker said. “His actions were what you would expect from President Trump’s defense lawyer, not our nation’s top law enforcement officer. Enough with the partisan spin—it’s time Congress and the American people have the opportunity to view the report and hear from Mueller himself. Mueller should testify in front of the Senate’s Judiciary Committee next month.” 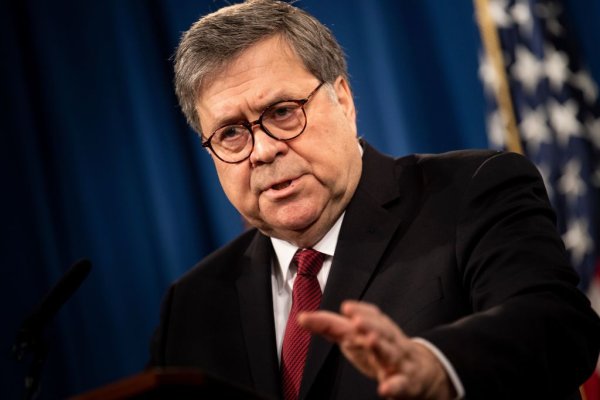