Priyanka Chopra turned up at the Met Gala on Monday night in style, the global actress happily showing off on the 2019 Metropolitan Museum of Art’s annual Costume Institute Benefit red carpet for fashion’s big night.

With stunning hair, silver-frosted brows and lashes and raspberry eyeshadow and lips, her beauty look was bold enough. But it was the fashion that finished the serve, featuring a feathery silver-and-pastel gown and flowing cape — all topped off with a silver cage crown. Even her hosiery was matching, polka-dotted with silver. The overall effect was of an otherworldly fairy godmother figure, or maybe a cousin of Glinda the Good Witch.

Chopra attended with her new husband Nick Jonas, who she married at a series of celebrations in India in the winter. The pair is not strangers to the star-studded event: Chopra has regularly wowed at the gala over the years, wearing a dramatic trench coat in 2017 and a velvet gown in 2018.

(The 2017 Gala was one of the first times they were spotted in public together; although they had only recently met, they were both guests of the designer Ralph Lauren during the evening, and were snapped in many photos as a pair.)

Most recently appearing in the romantic comedy Isn’t It Romantic, the activist and Quantico actress Chopra is eyeing a Mindy Kaling collaboration in the future. Jonas, meanwhile, has reunited with his brothers Kevin and Joe to relaunch their band the Jonas Brothers this spring; their first single, “Sucker,” proved a chart hit. 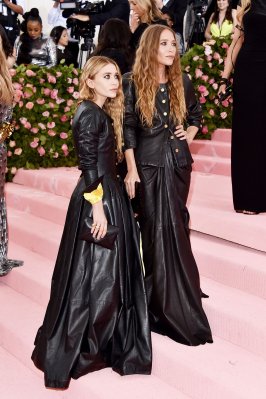 The Olsen Twins Brought Black Leather to the Met Gala
Next Up: Editor's Pick