U.S. aviation accident investigators have opened a probe into how an American Airlines plane struck a runway sign while taking off from New York’s John F. Kennedy International airport on April 10, forcing the plane back to the airport where it landed safely.

The plane, an Airbus SE A321 headed for Los Angeles carrying 102 passengers and eight crew members, hit the sign with its left wingtip just at it was preparing to lift off, the National Transportation Safety Board said in an email.

The plane had experienced an unusual roll, rotating the left wing downward, at a time when aircraft are usually level, the NTSB said.

“American Airlines is investigating this incident in coordination with federal authorities,” the carrier said in a statement.

The pilots reported to air-traffic control that their plane had banked to the left on its own, according to CBS News.

The Federal Aviation Administration also is investigating the incident, the agency said in a statement.

The plane landed a short time later and there were no injuries.

The Allied Pilots Association, which represents aviators at American, declined to comment on the accident because of an investigation. 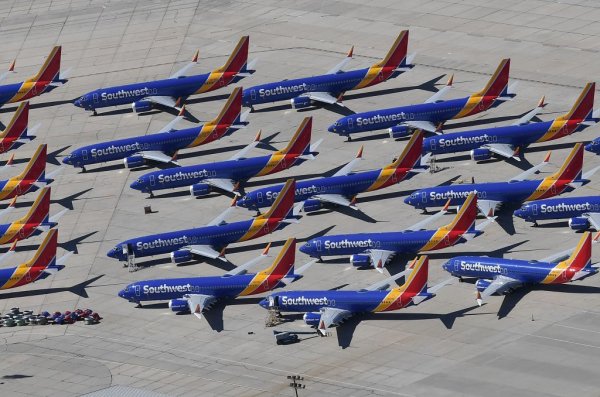 President Trump Says Boeing Should 'Rebrand' the 737 Max After Fatal Crashes
Next Up: Editor's Pick