From Nina Simone to Maya Angelou: How Beyoncé Honors 9 Black Icons in Her Homecoming Documentary

“When I decided to do Coachella,” Beyoncé says in the voiceover for her new Netflix documentary Homecoming: A Film by Beyoncé, “instead of me pulling out my flower crown, it was more important that I brought our culture to Coachella.”

Beyoncé pays tribute to that culture by honoring a myriad of high profile African-American thinkers, writers and activists of the 20th century in her documentary, which was released Wednesday alongside a 40-track live album.

The Netflix documentary is an in-depth look at Beyoncé’s 2018 Coachella show, where she was the first African-American woman to headline the festival since its founding in 1999. It includes appearances from contemporaries like Solange, Jay-Z, and former Destiny’s Child bandmates Kelly Rowland and Michelle Williams, voiceovers from Tessa Thompson and Danai Gurira, and incorporates work from Malcolm X and Chimamanda Ngozie Adichie.

And in her references to figures Nina Simone to Audre Lorde, Homecoming is also a homage to the heroes of black American culture. Here’s more on the historical figures Beyoncé features in the documentary.

Homecoming opens with a quotation from Pulitzer Prize-winning author Toni Morrison, reading “If you can surrender to the air, you can ride it.” Morrison, who wrote critically acclaimed novels including Beloved and Paradise, focuses on the themes of race and the African-American experience in the U.S.; she appeared on the cover of TIME in January 1998.

Like many other famous figures in the documentary, Morrison attended a historically black college (HBCU), having graduated from Howard University, Washington D.C., in 1953. Beyoncé includes the name of Morrison’s alma mater and her graduating year next to her quote, a format that follows with other icons.

An accomplished pianist and legendary songstress, Nina Simone was a key voice of the civil rights movement and blended activism with her music. “Politics was mixed in with so much of what went on…that I remember it now as two sides of the same coin, politics and jazz,” she reflected in her autobiography.

In an audio interview played near the start of Homecoming, Simone speaks about the importance of black culture and of her ambition to teach others. It’s a theme Beyoncé highlights in her own performance at Coachella through symbols such as Black Panther-inspired berets and outfits. “To me, we are the most beautiful creatures in the whole world, Black people,” Simone is heard saying.

“Education must not simply teach work—it must teach life.” This quotation flashes across the screen, the words of prominent black intellectual W.E.B. DuBois. Born in 1868, DuBois was an African-American civil rights activist revered for his philosophy, activism and advocacy. He graduated from the historically black Fisk University in Nashville, in 1888, and founded the National Association for the Advancement of Colored People (NAACP) in 1909.

DuBois’ quotation introduces a segment of the documentary showcasing young black cheerleading squads at HBCUs across America, including North Carolina A&T University, Jackson State University and Florida A&M University. Homecoming places great significance on HBCUs —Beyoncé says she wished she had attended one — and the documentary itself was also previewed a day before its release on Netflix at two HBCUs: Washington D.C.’s Howard University and Houston’s Texas Southern University.

Acclaimed novelist and poet Alice Walker also appears in Homecoming through a quotation: “Our mothers and grandmothers…moving to music not yet written.” A graduate of Spelman College in Atlanta, Walker is best known for her Pulitzer Prize-winning novel The Color Purple, depicting the relationships of African-American women in rural Georgia. The book was later adapted into a movie starring Whoopi Goldberg and Oprah Winfrey, the latter’s acting debut.

“You can’t be what you can’t see.” These words appear from Marian Wright Edelman, the first woman admitted to the Mississippi State Bar. Now 79, Edelman has dedicated her life to highlighting injustice and inequality, and founded the Children’s Defense Fund in 1973 to protect children and support families.

Edelman’s quotation in the film is echoed by actors Tessa Thompson and Danai Gurira, who speak about the importance of representation in their voiceovers. “The youth need to see their greatness reflected in our eyes,” Gurira says.

“Keep going, no matter what” was the ethos of African-American businessman Reginald Lewis, who became one of America’s richest black men in 1987 when he engineered the largest offshore buyout in American history at the time. His ferocious work ethic was legendary among his Wall Street peers. His life was cut short after an illness and he died at the age of 50.

Feminist Audre Lorde was a leading essayist and critic, whose work centered on race, gender, sexuality. One of her most well-known essays, “The Master’s Tools Will Never Dismantle the Master’s House,” is a rallying cry for solidarity and action in the face of racism, homophobia and oppression.

“Without community, there is no liberation” is a quotation directly from that essay included in Homecoming, introducing scenes following Beyoncé’s dancers on the road to Coachella (or Beychella, as the 2018 festival became affectionately known). Lorde’s message is echoed by Beyoncé herself, who says “I know the importance of us feeling we’re a part of something, like we’re being spoken to, like it’s worth it.”

African-American writer, feminist, poet and civil-rights activist Audre Lorde (1934-1992) poses for a photograph during her 1983 residency at the Atlantic Center for the Arts in New Smyrna Beach, Florida.
Robert Alexander—Getty Images

Provocative philosopher and activist Cornel West makes a voiceover appearance in Homecoming, citing musicians Curtis Mayfield, John Coltrane and Nina Simone as examples of hope. He encourages listeners to be people of integrity. West is currently a professor of philosophy and African-American studies at Harvard University, a leading commentator on racial injustice, and has produced three spoken word albums in collaboration with artists like Prince and Andre 3000.

“What I really want to do is be a representative of my race, of the human race,” says literary titan Maya Angelou in a voiceover towards the end of Homecoming, delivered in her distinctly captivating tone. “I have a chance to show how kind we can be, how intelligent and generous we can be.”

Born Marguerite Annie Johnson in 1928, Angelou’s acclaimed 1969 autobiography I Know Why the Caged Bird Sings with its profound depictions of personal trauma catapulted her to prominence. Over her lifetime, she wrote more than 30 books and was the recipient of over 50 honorary degrees. She was a starring guest at the inauguration of President Bill Clinton in 1993, where she recited her poem ‘On the Pulse of Morning.’

The audio clip heard in Homecoming appears to be from one of Angelou’s final interviews before her death in 2014. The clip also featured in the trailer for the documentary, with Angelou delivering advice for “this” generation to “tell the truth to yourself first, and to the children.”

American poet and author Maya Angelou gestures while speaking in a chair during an interview at her home.
Jack Sotomayor—Getty Images
More Must-Read Stories From TIME 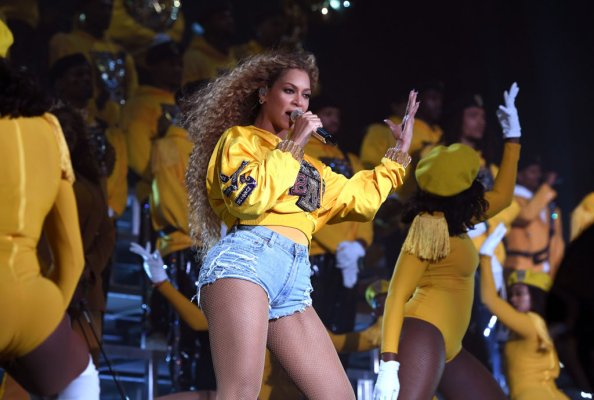 Hear Beyoncé's Surprise New Song 'Before I Let Go'
Next Up: Editor's Pick