When forensic geologist Roger Dixon was approached to work for Oscar Pistorius, he hesitated before giving his answer. “I almost turned it down,” says Dixon, “because of the past, you know, you sort of tend to be on one side.” For 18 years, Dixon was working with the South African Police Service (SAPS) forensic laboratory — his work included conducting fingerprint analysis on stolen gold — before taking a research position with the University of Pretoria in 2013. But Dixon says in his field there is no room for prejudice. “Metal is the only witness that never lies,” says the 54-year-old, “it never changes its story.”

Dixon is part of a big-ticket legal and forensic team hired by Pistorius, South Africa’s fallen athletic star, for his premeditated murder trial, beginning March 3 in Pretoria. Pistorius, now 27, shot his model girlfriend Reeva Steenkamp early Valentine’s Day morning last year. He says he had no intention to kill her, believing Steenkamp to be a violent intruder in his house. If convicted, Pistorius faces a life sentence, with a minimum of 25 years in prison.

To defend himself, Pistorius has hired the Evidence Room, an American forensic animation firm based in Cleveland, Ohio, that specializes in crime scene reenactments. The videos are Pixar meets murder trial: illustrating car crashes and murders with faceless cartoons of people in jagged geometric landscapes. “We don’t give opinions, we don’t say ‘this is how it happens,’ we describe the scene,” says Scott Roder, the 43-year-old chief executive officer of the Evidence Room. “That’s our job: to help people understand the bigger picture.”

Roder founded the business in 2003 after successfully using animations in court to demonstrate shootings. His work caught on as more and more lawyers preferred pressing play on a video to wasting time trying to explain a crime scene themselves. “It became very effective to have these animations,” says Roder. “Now we’re sitting in 2014 and it’s very routine to bring in an animation for a legal proceeding.” Today, Roder says he works on 100 cases a year across the world, sometimes charging upwards of over $10,000 a video. With one month to go before the Pistorius trial begins, it’s a tense time for Roder, a father of two. “Things are just so busy now,” he says, “it’s hard to get off task and talk about things.”

It’s the quality — and size — of the Pistorius legal and forensic team that makes the trial exceptional in the country, says Stephen Tuson, criminal law adjunct professor at University of the Witwatersrand in Johannesburg. “South Africa doesn’t have a strong tradition of the use of forensic evidence simply because there’s a lack of resources,” says Tuson, a practicing attorney. What’s a problem for many South Africans — the average black household earns 60,613 rand ($5,400) a year, a sixth of what whites earn — is not one for Pistorius. “They [the Pistorius team] have taken the time and trouble, and spent the money, on obtaining good forensic experts,” says Tuson. “There’s going to be a large reliance placed on forensic evidence that will be dissected, by both sides, down to the last molecule.”

Pistorius, whose personal wealth from athletic contracts is buttressed by his affluent extended family, was able to pursue some of the best forensic minds in the world. “They asked me,” says Henry Lee, a U.S. forensic scientist famous for testifying during the O.J. Simpson trial. But Lee, a man in his late seventies, declined. “I’ve already retired many times,” he says. (When asked if the Pistorius team approached Lee, Brian Webber, one of the athlete’s lawyers, said, “I don’t want to comment on that, certainly not to my knowledge.”) Ultimately, Pistorius ended up selecting a home-grown squad.

Pistorius hired Kenny Oldwage, an erudite lawyer famous for helping acquit the man accused of killing Nelson Mandela’s great-granddaughter Zenani in a drunk driving car crash, and the quick-witted Barry Roux, known for his fondness of wearing scarlet ties to court. The trial is going to be one of South Africa’s biggest legal showdowns, with the Pistorius team going up against prosecutor Gerrie Nel, a court veteran who won a corruption charge against ex-Interpol president and former South African police commissioner Jackie Selebi.

Within days of Steenkamp’s murder, private forensic pathologist Reggie Perumal appeared with the Pistorius team. Perumal, known for testifying on the death of Zimbabwe’s former army general Solomon Mujuru, reportedly attended Steenkamp’s autopsy — a rarity in South Africa. “Very few people can afford an independent investigation of someone,” says Steve Naidoo, a Durban-based private forensic pathologist, who says daily rates for forensic experts in South Africa can go as high as R15,000 ($1,300). “The amount of private work is few and far between,” he says. “Most people don’t have that opportunity.”

Two firearm experts, specialists in guns and bullets, are also working for Pistorius. One is Thomas Wolmarans, a former forensic expert with SAPS based in Pretoria. In 2007, Wolmarans testified on behalf of strip club owner Michael Jackson, accused of murdering a street child. (Wolmarans said there could have been a case of mistaken identity. Jackson was found guilty). “You do this type of work, you take it, and then you must forget about it,” says 67-year-old Wolmarans, “a case is a case.”

The other firearm expert is Jannie van der Westhuizen, whose services include “shooting scene reconstruction and re-enactments” and “blood splatter analysis,” according to his website. Westhuizen, a 45-year-old South African who has a slight American accent, worked for the State of South Dakota Forensic Science Laboratory and the Oakland County Sheriff’s Office in Michigan before setting up his private business in Pretoria. “My philosophy? Always be objective,” says Van der Westhuizen, “you cannot be partial, any kind of bias cannot influence your decision.”

For his part, Pistorius is “extremely overwhelmed” and is spending time with his family in anticipation of the trial, says the Pistorius family spokesperson Anneliese Burgess in an email. His feelings are understandable, given the hardball attitude of his forensic experts. As Dixon put it: “a forensic scientist is not on anybody’s side.” 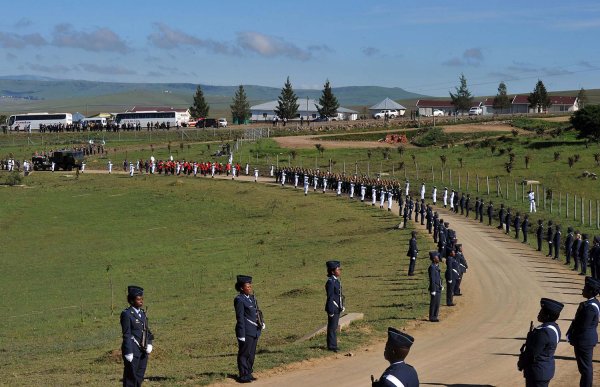 Mandela Left $4.1 Million In Will
Next Up: Editor's Pick