We Tried to Save Notre Dame Too Late, Says Champion of Cathedral Restoration

In the stunned aftermath of the Notre-Dame blaze on Monday night, French firefighters and experts ventured into the devastated cathedral on Tuesday morning to survey what remained. They finally declared — to the relief of millions — that the structure of the 859-year cathedral had been saved, and that firefighters had rescued some of the most precious relics and stashed them in Paris’s City Hall, even while the world watched aghast at flames leaping from the Medieval icon.

French President Emmanuel Macron in a televised address on Tuesday night, said he would like the cathedral to be rebuilt in five years, and that he would organize an international donors’ conference in Paris. Offers of help to fund the rebuilding poured in on Tuesday, including from Apple and by day’s end, pledges had reached about $670 million.

However, those who have for years tracked the declining condition of the cathedral wondered whether the fire might have been far less severe had they launched major renovations years ago — an option that the cash-strapped Notre-Dame had been unable to do. Notre-Dame began a €150-million ($170 million) construction project last year, in an effort to restore and upgrade the wooden roof and spire, which was considered to be the most urgently needed work.

“It was a question of starting too late,” says Michel Picaud, head of the non-profit organization Friends of Notre-Dame de Paris, which launched a fundraising effort across the U.S. in 2017 to pay for the work. “There was fire proofing everywhere, but it was not enough, after what we saw,” he told TIME on Tuesday morning. “The restoration of the cathedral had been taking place all along the years, since the 19th century. But it would have been better had we started this program much earlier.”

There was a sense of disbelief among Parisians on Tuesday morning that Notre-Dame had been so vulnerable to devastation, after withstanding nearly a millennium of epic upheavals, including the French Revolution, and — in just the past century alone — two world wars and the Nazi occupation of Paris.

Picaud said he had been in the cathedral all day Monday, and then raced back later from his home when the fire began. He stood in the vast square outside the famous bell towers until 2 a.m., along with hundreds of Parisians, watching horrified as firefighters battled for hours to get the blaze under control. With the cathedral now cordoned off to allow the firefighters to continue their work, Picaud has not been able to enter since.

It was in the upper roof portion, where construction was ongoing, that the fire appears to have started. Some experts speculated to French journalists on Tuesday morning that the initial cause might have been a spark from a welder’s torch, although there is no proof for their theory. A large portion of the cathedral’s exterior is under scaffolding. French television reported that the fire appeared to smolder for a while before turning into a blaze. French officials ruled out any criminal act.

Two-thirds of the roof collapsed in the fire, in the process also destroying some of the centuries-old statues of saints that were perched on the spire, Picaud said. Part of the nave and the choir are also gone.

The most severely damaged were the vaults of the ceiling, which its Medieval architects had constructed from about 5,000 oak trees, and which had until Monday night been one of the finest examples of Gothic construction still standing.

In what was the most shocking moment of the fire, the delicate 300-foot spire, which dated back more than 200 years, tilted to one side and then snapped off almost like a twig, tumbling into the inferno. The original spire was lost in 1792, shortly before the French Revolution. At the time, fiercely anti-clerical crowds laid siege to the cathedral, ransacking its irreligious artworks. The spire destroyed on Monday night dated to the mid-19th century, when a new spire was erected. “It was very delicate and it was made of wood,” Picaud said. “That did not help.”

Early Tuesday morning, Parisians ventured out in a soft drizzle to see the cathedral up close, as if to grasp for themselves that the fire had not simply been a terrible nightmare.

While the fire blazed for hours on Monday night, regular Parisians, as well as priests, nuns and tourists filled the vast square outside the bell towers, singing hymns like “Ave Maria” and gazing on in shock. By morning, with the flames now doused, dozens gathered on the left bank of the Seine outside the cathedral, gazing mostly in silence.

“I have passed Notre-Dame every day on my way to work,” Adrien Aulas, 26, a Paris lawyer, said, standing outside the damaged southern side of Notre-Dame. “I am used to seeing the cathedral all the time. It is part of my life”

After five months of often violent clashes with the police in Yellow Vest protests, the devastating fire seemed — at least for a little while — to infuse the city with a more contemplative, spiritual mood. “Perhaps this will remind us that we all have the same emotions,” Aulas says. “We all have important things in common, like our sensitivity to beauty and our history.”

And yet, like other Parisians who spoke to TIME on the street, Aulas dismissed any prospect of the tragedy ending the street protests. “The situation is deeper than that, unfortunately,” he says.

Indeed, at the very moment that the blaze whipped through the rooftop of Notre-Dame, President Emmanuel Macron had been scheduled to address the nation, in order to announce sweeping economic measures, in response to the protesters, and to calm the fury that has raged on Paris’s streets since November. Instead, he scrapped his plans and rushed to the cathedral, along with his Prime Minister Edouard Philippe and Paris Mayor Anne Hidalgo, and promised on television to launch a rebuilding fund without delay, and to draw in specialists from across the world for Notre-Dame’s reconstruction.

Still, amid the gloom in Paris, there were glimmers of good news.

The cathedral had until Monday night housed a vast collection of Christian relics and artwork collected over the centuries, and among those rescued were its two most valuable items: The crown of thorns that many believe Jesus Christ wore on his way to his crucifixion, and the 13th -century tunic believed to have belonged to King Louis IV.

But many of the grand paintings in the cathedral were too difficult to rescue while firefighters battled the blaze. France’s Minister of Culture Franck Riester told reporters that the paintings would be removed on Friday morning, and transported to the Louvre Museum a short distance from the cathedral. There, they would be treated for water and smoke damage, and stored for a time when Notre-Dame might finally be reopened.

Deputy Interior Minister Laurent Nunez told reporters Tuesday afternoon that 20 firefighters had raced to save the two bell towers, “with determination and courage, at the risk of their lives.” He did not elaborate how the towers had been saved. “We have to be vigilant, to make sure it is stable so that our firefighters can enter the cathedral once more,” he said.

Even so, church officials sounded a note of reassurance, saying that they were determined to rebuild the cathedral, no matter the cost. “We have destroyed Notre-Dame, but we have not destroyed the soul of France,” Archbishop of Paris Michel Aupetit told BFM TV, adding that the damage was “difficult to calculate.”

What lies ahead is a mammoth salvage and rebuilding effort. So far, no one can say how long that might take, nor how many hundreds of millions, or perhaps billions, might be required.

Picaud and others have spent years appealing to the French government and private donors for money to renovate and upgrade the cathedral. In 2017, they guided TIME on to the roof of the building to show how it was crumbling. Bits of stone work were dropping off, eaten through by centuries of wear and tear, as well as the intense pollution in central Paris. So too were the gargoyles for which Notre-Dame is famous, which Picaud likened then to being “like ice cream, melting in the sun.” Some of the lost gargoyles, which act as rain ducts, have been replaced by cheap PVC piping, while at least one statue on a bell tower that was deemed precarious was strapped down, rather than properly restored, in order to stop it from falling.

Even so, the French government had hesitated to commit serious funds for Notre-Dame’s restoration, in part because of the laws imposing strict secular government limits funding for churches. An annual maintenance budget from the government of €2 million (about $2.26 million) covered the bare basics. In 2017, TIME asked a Ministry of Culture official why the government did not commit more funds to upgrading Notre-Dame. “France has thousands of monuments,” replied the official, who was not authorized to be named. “It will not fall down.”

Notre-Dame draws a giant 13 million tourists a year, or about 13,000 a day—more than the Eiffel Tower does. Yet it is forbidden under law from charging an entrance fee, since places of worship are required to be open to all, at any time. Even a modest fee, they told TIME in 2017, would go a long way to solving their ongoing funding crisis.

Last year, Picaud’s group raised about $2 million in the U.S. “The Americans are the most passionate non-French people about the cathedral,” he said on Tuesday, adding that “there is a kind of tradition of philanthropy in the U.S. which does not exist in France.”

Ironically, the immense loss from the fire, and the sense of grief that settled over Paris, prompted huge private donations within hours—the kinds of donations for which Notre-Dame officials had appealed for years, with no luck. The family of French billionaire François Pinaud pledged €100 million (about $113 million) to rebuild the cathedral, while Bernard Arnaud, who heads the luxury group LVMH, pledged €200 million (about $226 million). The French oil giant Total said it would donate €100 million. And hundreds of regular Parisians went online to donate small amounts to crowdfunding efforts that sprang up as the fire raged on Monday night. 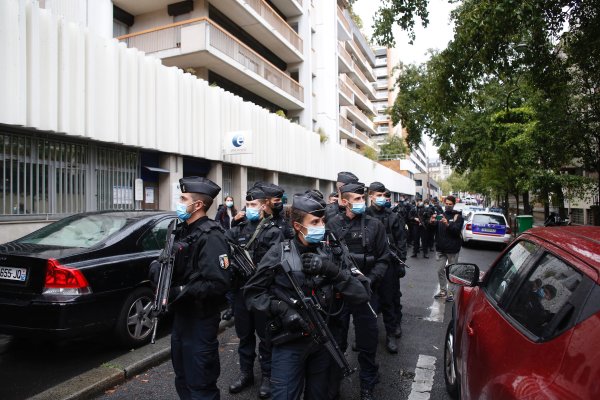