Less than a day after French President Emmanuel Macron made a call for donations to help rebuild the landmark Notre Dame cathedral which was severely damaged in a blaze on Monday night, nearly $1 billion has been received in pledges.

Experts say that restoring Notre-Dame, which took a century to build after construction started in 1160, will take years, or even decades.

The director of UNESCO, the U.N.’s culture agency, told the Associated Press that work to protect the 12th Century stone and wood structure from water damage should start immediately, saying “the first 24, 48 hours” will be crucial to the building’s future.

Stephane Bern, presidential cultural heritage envoy, told France Info that about €880 million (about $995 million) had been raised as of Wednesday, the AP reports. The bulk of the money has been promised by France’s wealthiest individuals and companies. François-Henri Pinault, the 56 year-old C.E.O. of Paris-based luxury goods group Kering, which owns brands like Gucci and Yves Saint Laurent, said Tuesday morning that his family would give around $113 million.

The largest pledge came from Bernard Arnault, 70, whose family owns the luxury conglomerate LVMH. The Arnault family and LVMH will give $226 million to “show their solidarity at a this time of national tragedy,” the company said in a statement. LMVH, which owns Louis Vuitton, also offered the French state the use of its “creative, architectural and financial specialists” to assist in fundraising and reconstruction efforts.

More pledges have rolled in following announcements by Pinault and Arnault. Patrick Poyanné, CEO of French energy company Total, said his firm would donate €100 million (about $113 million) for reconstruction efforts. The French cosmetics company L’Oreal pledged €200 million ($226 million) along with the Bettencourt-Schueller foundation and the Bettencourt Meyers family, which founded both organizations. The Walt Disney Company pledged to donate $5 million to aid in reconstruction efforts on Wednesday.

Fundraising campaigns of all sizes have sprung up online. The Fondation du Patrimoine, which funds French heritage projects, said it had already collected around €2 million (around $2.3 million) by Tuesday lunchtime in France.

The New York-based French Heritage Society, a non-profit supporting French heritage in the U.S. and France, also launched a donations page, inviting American lovers of the cathedral to contribute.

German President Frank-Walter Steinmeier has called for a Europe-wide effort to rebuild the cathedral, saying that “[Notre-Dame] is not only a great building, it is a great European landmark” and that footage of it burning would “probably leave no one in Europe untouched,” the AP reports. 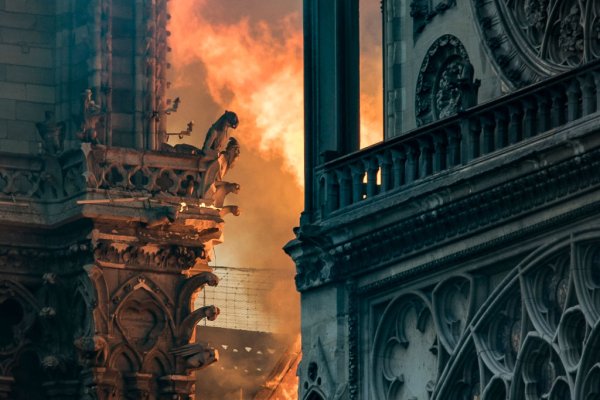 The Notre Dame Fire Put Priceless Art and Artifacts at Risk. Here's What Survived — and What Didn't
Next Up: Editor's Pick