Notre Dame Isn't the First Historic Building to Be Rebuilt After Burning Down. Here Are 6 Others

The cathedral is just one of many famous historical sites around the world that have been damaged by fire and required repair and restoration work to be returned to their former glory. Notre Dame sustained “colossal damage,” Cathedral spokesman Andre Finot told reporters. Firefighters are still surveying the full extent of the damage.

Many other historical buildings were able to re-open their doors after being successfully restored. With the work of skilled architects and builders, some sites were reconstructed in such a way that it is nearly impossible to tell the difference between original features and their replicas.

Duncan Wilson, Chief Executive of Historic England — a governmental body that protects historical sites — tells TIME that, despite the pain of seeing a beloved landmark burn, these disasters can present opportunities of their own. Building restorations, he says, can create jobs, strengthen the craftwork industries, and inject modern day creativity in architecture.

Here’s a look at other historical structures that were ravaged by fire, only to be rebuilt:

The Inside Of St George's Hall, Windsor Castle on January 14, 1993, after the fire in November
Tim Graham —Getty Images

In 1992, a fire broke out in Windsor Castle, an official residence of Queen Elizabeth II and the largest inhabited castle in the world. The blaze damaged more than 100 rooms in the gothic estate.

Wilson said that out of the destruction came an opportunity, as it helped “to encourage the development of craft skills and a first class restoration of 19th century interiors that had been degraded.”

The Grace Cathedral – the third largest in the U.S. – burnt down in 1906 after a fire erupted in the city following one of the most significant earthquakes in history.

The cathedral (originally built in 1849) was rebuilt, beginning in 1928 and completed in 1964, in the French Gothic style of Paris’ Notre Dame Cathedral. Grace’s spire looks almost identical to the one that collapsed in flames in France on Monday.

Slane Castle in County Meath ahead of the Oasis concert on Saturday June 20, 2009.
Julien Behal - PA Images via Getty Images

In 1991, a fire took hold of Slane Castle, located in the town of Slane, in Ireland’s County Meath, destroying one-third of the 18th century building. For 10 painstaking years, craftsmen and architects worked to restore the castle and reproduce the interior features in the style of that time.

“All the windows and plasterwork in the ballroom are brand new, and I defy you to tell me the difference,” said Slane owner Lord Henry Mount Charles after it was rebuilt. The Castle is now a thriving venue for music concerns, weddings and other events, with room for 80,000 guests. The castle’s open air concerts have featured an array of big artists, including Madonna, Bruce Springsteen, The Rolling Stones and Queen.

During World War II, the cathedral — the largest Gothic church in Northern Europe — was hit by 14 aerial bombs. Luckily, some of the treasured items inside were protected by sandbags, and the medieval windows were removed before the attacks. An emergency repair was carried out in 1944 with poor-quality brick taken from other buildings destroyed in the war; they remained visible for over 50 years as a reminder of the conflict. In 2005, the cathedral was fully reconstructed in line with its original appearance.

St. Paul’s Cathedral, considered the mother church of London, was severely damaged in the Great Fire of London in 1666. The reconstruction took 33 years and spanned the reigns of five monarchs, partly due to the challenge in getting supplies of Portland stone.

In September 2018, Brazil’s oldest museum and most important history and science museum was burnt down. Much of its collection of 200 million items was lost in the blaze. The 200-year-old museum was the largest in Latin America. It is currently undergoing restoration.

What’s next for Notre Dame?

A “faithful” restoration of a destroyed building rests on the availability of public records and photos, Wilson said. “If you haven’t got those, you rely very carefully on your salvage operation — an archeological approach,” he explains. Once the fire is out and the cathedral is stable, he says that leftover artifacts will be carefully recovered and studied so that they may be replicated during the restoration process.

Wilson adds that reconstruction projects sometimes make use of a “creative response” from the present day. He believes a combination of public records and the archeological approach will be used to restore the damaged parts of Notre Dame. The “iconic” nature of Notre Dame’s “representation of the French state and Catholic church” will cause leaders to restore Notre Dame in a way that’s faithful to the landmark as it stood before the blaze, he adds. 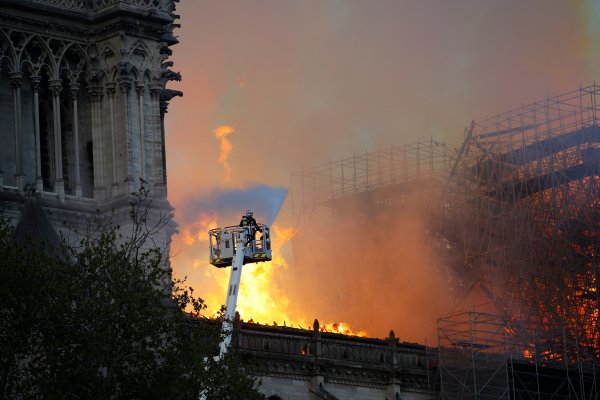