A sculpture is seen in front of a Deutsche Bank branch in Frankfurt, Germany on April 15, 2019.
Boris Roessler—Picture Alliance/Getty Image
By Billy House / Bloomberg

Congressional Democrats issued subpoenas to Deutsche Bank AG and other banks to obtain long-sought documents indicating whether foreign nations tried to influence U.S. politics, signaling an escalation of their probes into President Donald Trump’s finances and any dealings with Russians.

House Intelligence Chairman Adam Schiff said his panel made the requests Monday in coordination with the House Financial Services Committee, according to a statement.

Both panels have been seeking Trump-related material from Deutsche Bank since Democrats took over the House majority in January. Schiff said the Frankfurt-based bank has been cooperative with the probe and Monday’s request was a “friendly subpoena.” Such a subpoena is typically submitted when a firm is willing to hand over documents but wants a formal request first.

“Deutsche Bank is engaged in a productive dialogue with the House Financial Services and Intelligence Committees,” Deutsche Bank spokeswoman Kerrie McHugh said Monday. “We remain committed to providing appropriate information to all authorized investigations in a manner consistent with our legal obligations. If you have questions concerning the investigative activities of the committees, we would refer you to the committees themselves.”

The House Financial Services Committee has long been in talks with Deutsche Bank about Trump-related records, including any tied to Russia. Maxine Waters, the California Democrat who leads the panel, signaled last week that her interest in Russia extended to other lenders as well. At a April 10 hearing where the chief executive officers of the biggest U.S. banks testified, her first question was about any business dealings their firms had in Russia.

“The potential use of the U.S. financial system for illicit purposes is a very serious concern,” Waters said in a statement Monday. “The Financial Services Committee is exploring these matters, including as they may involve the president and his associates, as thoroughly as possible pursuant to its oversight authority, and will follow the facts wherever they may lead us.”

The Intelligence Committee is more focused on aspects of financial connections or dealings that could suggest potential leverage by foreign entities over Trump, his family or his business. Trump has some $340 million in loans from Deutsche Bank, according to his most recent financial disclosures.

Schiff has frequently noted that Trump was pursuing a Trump Tower project in Moscow during the presidential campaign.

“That’s a different form of collusion, but it is equally compromising to the country because it means the president of the United States is looking out for his bank account and not for the United States of America,” Schiff said in an interview on NBC in February.

Schiff and other committee Democrats had sought to pursue Trump’s financial connections ever since he became president. But it was only after Democrats won control of the House in 2018 that they gained subpoena power.

Deutsche Bank had been Trump’s go-to lender for decades, even as other commercial banks stopped doing business with him because of multiple bankruptcies. 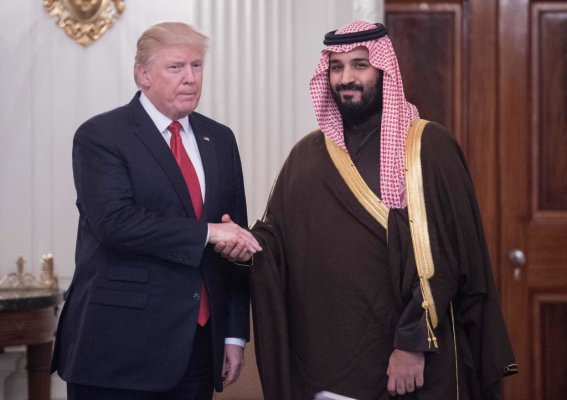 Trump Talks to Saudi Prince Despite Uproar Over Khashoggi
Next Up: Editor's Pick