Don't Feel Bad About Getting Take-Out. That's Been Normal for Thousands of Years

Today, when we ask “what’s for dinner?” we’re likely to have take-out in mind. And while that might seem like a modern idea, archaeology reveals that it’s actually a very old strategy. A million years ago all of our food was eaten on the run. Our ancestors migrated around the world collecting fruits and nuts and animal protein, nibbling their way through the countryside as they went.

When cities first came into existence about 6,000 years ago, our ancestral hankering for mobile food accelerated into a real art form. In ancient Pompeii, there were hundreds of shops that sold food ready-made for passersby, their open cooking pots displayed on counters right next to the sidewalk. Angkor’s magnificent 13th century Bayon Temple is covered with sculptural depictions that take into account the daily realities of eating and drinking, with bas-relief images of people preparing cauldrons of food and grilling skewers of meat over an open fire. And the ancient Aztec capital of Tenochtitlan had vast markets with a diversity of takeaway foods that included meat tamales, plain tamales, barbecued tamales, fish tamales, fruit tamales, turkey egg tamales, rabbit tamales … and for the more delicate palate, tamales made with beeswax, honey and maize flowers.

Today, more than half of the world’s population lives in cities that have much in common with these ancient urban centers. They were places to which migrants came seeking work, whether they were educated “white-collar” workers seeking professional jobs or those who sought to make a living through the work of their hands. The division of labor made them dependent on each other: some people made food, and some people depended on the meals made by others.

Often, food preparation was an occupation taken up by women. One image from Bangkok’s Grand Palace tells the story of women vendors everywhere: sitting on a mat with two large pots of food, a water jar and an array of bananas, and with a tidy stack of bowls to hand, the vendor engages with a female customer and a child who points excitedly at the tasty opportunity. A ubiquitous urban scene, the vignette is reminiscent of the cumulative economic capacity encompassed in the modern tea stalls of India, the pupusa stands of San Salvador and the food kiosks of Ghana, where 90% of the street vendors are women.

Even the things that we might find worrying about take-out have a long history, like the quantity of trash generated by outsourcing our meals. As an archaeologist, I can tell you that every ancient urban center that I’ve ever excavated, visited or read about has a stupefying quantity of discarded artifacts, many of which are connected with take-out food. I’ve worked with piles of broken pottery amphorae at the ancient Roman city of Leptiminus in Tunisia and heaps of discarded food bowls at the site of Sisupalgarh in India. I’ve commiserated with my colleagues whose publication plans for their excavations are stalled, sometimes for years, until they can finish counting and classifying the tons of materials that they have unearthed.

At the site of Chogha Mish in Iran, archaeologists recovered a quarter million pottery serving bowls in just two seasons of excavation. Keeping in mind that even the grandest excavations remove an amount of dirt that isn’t half the size of a competition-level swimming pool, one can only imagine how the researchers despaired of getting through all of the artifacts from just a fraction of the ancient site. Another great example of urban discard comes from the excavations at the ancient Maya capital of Tikal in Guatemala. Thanks to the work of the archaeologist Vivian Broman, we have as much detail on ancient dumps as we do on the loftiest of ritual structures. Her excavations of a deep trash deposit, consisting of ancient sweepings of the plaza, included a whole variety of discarded market items including large pottery jar sherds. The result is the same as what we see tucked behind boarded-up buildings, abandoned in alleys and tossed onto the periphery of public spaces in our own cities: a groaning weight of trash that is a relentless reminder of the scale of production, commerce and consumption in urban sites.

All of that consumption might make you feel a little guilty about how often you eat out or get food to-go, but that’s not new either. There’s an ancient cuneiform text that reveals people complaining about having to eat “bought bread,” which was apparently not as good as the homemade variety. To the Mesopotamian householder who wrote those words, the complaint revealed a twinge of uncertainty about what people should eat every day, as well as what they would be seen serving to guests — echoing a modern concern about whether it’s healthier to eat out or cook at home, more host-worthy to make a meal or buy takeout, more genuine to buy a fancy cake or to bake a less elaborate specimen at home. The decision to get “bought bread” encompassed a whole range of follow-up questions about the time, money and labor for cleanup too.

In short, even a simple purchase of daily staples was a point of stress for ancient Mesopotamian urbanites, resulting in a phenomenon that we can sympathize with today.

But as with ancient Mesopotamians who kept on ordering take-out, the opportunities that we get with outweigh the negatives. For the price of a plate of pad thai or carbonara or schwarma (plus tip!), we can travel the world from the comfort of our own sofa. And if we think that take-out is a big part of our lives now, it will only increase in future as everyone from college students to busy homemakers, office workers and retirees become increasingly untethered from their home kitchens. A recent study by the global banking firm UBS suggests that food delivery will continue to experience impressive growth, making it one of the most robust economic sectors. The advent of “dark kitchens,” drone-delivery pizza and Uber Eats might make it all seem futuristic, but all of this isn’t really new — it’s just a return to our ancestral conditions, and to a mode of eating that makes perfect sense for our busy lives.

Adapted from Cities: The First 6,000 Years by Monica Smith, published by Viking, an imprint of Penguin Publishing Group, a division of Penguin Random house, LLC. Copyright © 2019 by Monica L. Smith. 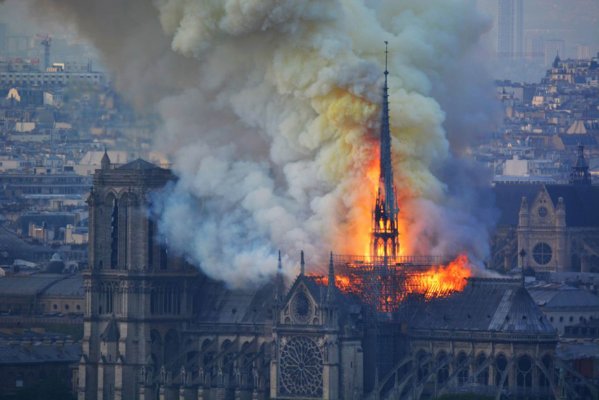 Notre Dame Cathedral's History Has Always Been One of Destruction and Restoration
Next Up: Editor's Pick