As the final season of Game of Thrones kicks off, one the show’s cast members is taking fans behind the scenes—and behind the magic—as the beloved HBO series winds down.

In a photo shared on Instagram ahead of the show’s Season 8 premiere on Sunday night, Emilia Clarke posted a photo of herself on set and it is both adorable and fascinating. In the photo, Clarke is in character as Daenerys Targaryen a.k.a. one of the current claimants to the Iron Throne of Westeros and Mother of Dragons. In the photo, Clarke is cuddling up to a green and white machine that, through the magic of computerized special effects, will eventually be rendered as her beloved dragon, Drogon, named after her former husband, Khal Drogo.

“Me and my baby (dragon) (Drogon) just very excited for you all to see #season8gameofthrones which if I’m not mistaken begins….now,” she captioned the post. While Clarke posted the image to share her excitement for the final season, the photo also reveals that Clarke is an even better actress than we may have thought. It clearly takes a great deal of talent and imagination to pretend you’re flying on a fearsome, fire-breathing dragon when you’re actually on what looks like an astroturf-covered mechanical bull. 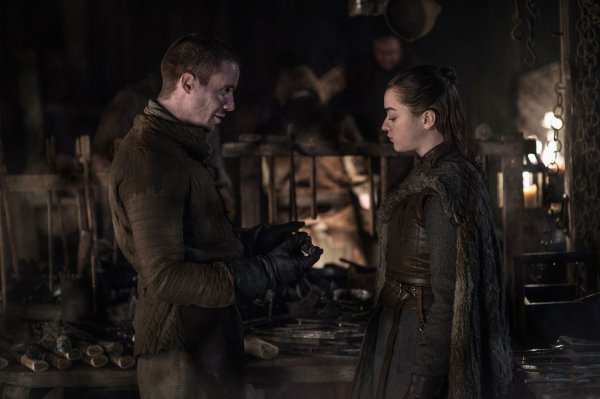 How a Throwback Game of Thrones Detail May Hint at Who Will Claim the Iron Throne
Next Up: Editor's Pick