From Arya and the Hound to Tyrion and Sansa, the Game of Thrones season 8 premiere was rife with long-awaited reunions between fan favorite characters. For many viewers, the most emotional one was that of Jon and Arya, who hadn’t seen each other since Jon gifted Arya with her trusty sword Needle in the second episode of the series.

After catching her first glimpse of him in years riding toward Winterfell in Daenerys’ procession, Arya waited until Jon was alone in the godswood to speak to him. But after a tear-inducing hug, Arya took a moment to remind Jon that even though he bent the knee to Daenerys, he’s a Stark.

“Jon Snow and Arya are two of the most important characters in the story and they love each other very deeply,” showrunner David Benioff explained in the post-episode breakdown. “Arya was the only one who treated Jon like a real member of the family when he was a child and he was the only one who treated her with the respect that she needed when she was a kid. Jon has invited this huge army of foreigners into their home and Arya understands why he did it, but Arya’s on Sansa’s side. Blood is definitely thicker than water when it comes to Starks.”

Fans, of course, loved the moment.

The Starks are officially back together. 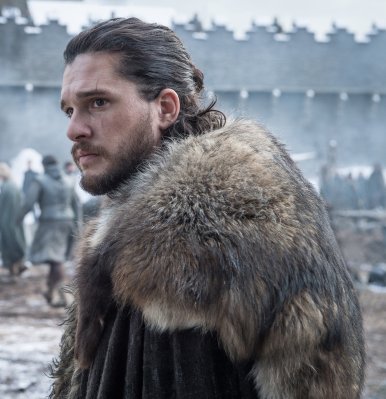 Jon Snow Finally Knows Something. Here’s How It Will Affect Game of Thrones’ Ultimate Endgame
Next Up: Editor's Pick