Julian Assange gestures to the media from a police vehicle on his arrival at Westminster Magistrates court on April 11, 2019 in London, England.
Jack Taylor—Getty Images
By Alejandro de la Garza

Would attempting to extort a sportswear company or paying hundreds of thousands of dollars to get your child into college make for a more intimidating cellmate?

“I paid $500,000 to a women’s crew coach to say my daughter was good at rowing,” said McKinnon-as-Loughlin, looming behind a group of prisoners. “I’m loco.”

Actress Lori Loughlin and her husband were recently indicted as part of a college admissions scandal, codenamed Varsity Blues.

Not to be outdone, Davidson’s Michael Avenatti soon joined Loughlin to brag about his own alleged crimes.

“I’m accused of crimes you can’t even conceive of,” said Davidson-as-Avenatti. “Like blackmailing a sneaker company and stealing taxes from a coffee shop to fund a race car team.”

But SNL saved the most menacing figure for last — a bearded, black-suited Julian Assange played by guest star Michael Keaton.

Recently arrested in the U.K., WikiLeaks founder Julian Assange had been under diplomatic protections in the Ecuadorean embassy in London since 2012.

“Here’s how crazy I am. I’m wanted in the U.S. and Sweden. I’m from Australia. I live in London, in Ecuador,” said Keaton-as-Assange. “You try figuring that one out.” 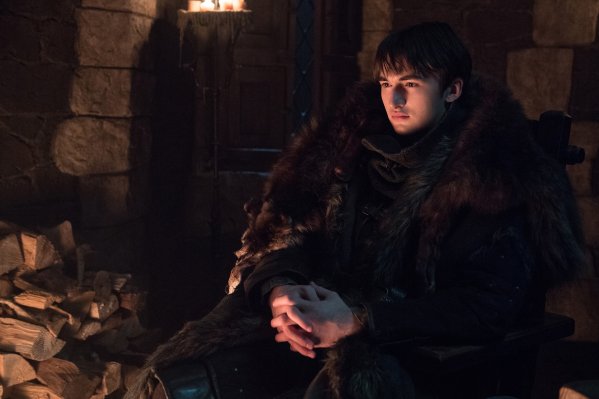 Breaking Down How Time Travel Works in the Game of Thrones Universe
Next Up: Editor's Pick