In the hours after President Donald Trump tweeted a video that spliced together an edited clip of Rep. Ilhan Omar speaking and footage from the Sept. 11 attacks, frontrunners for the 2020 Democratic nomination expressed their outrage.

On Friday, the President tweeted a video that showed the Minnesota congresswoman, referring to the terrorist attacks, saying, “Some people did something.” The clip was followed by images of the attacks with the message, “WE WILL NEVER FORGET.”

“After 9/11 we all said we were changed. That we were stronger and more united. That’s what ‘never forget’ was about. Now, a President uses that dark day to incite his base against a member of Congress, as if for sport. As if we learned nothing that day about the workings of hate,” Buttigieg wrote.

Omar has become a controversial figure over the last few months. This winter, she released several tweets which some critics – including members of her own party – decried as dealing in “anti-Semitic tropes.” Other liberals, especially the younger and left-leaning segment of the party, defended Omar. Rep. Alexandria Ocasio-Cortez tweeted that oversized outrage to Omar’s comments was an attempt to silence a woman of color.

Some have argued that some of the criticism of Omar has risen to the level of stoking violence against her or the Muslim community. Last week, a New York man was arrested and charged with threatening to kill the congresswoman.

Sen. Warren’s tweet on Saturday echoed this concern. She accused the President of “inciting violence” against the congresswoman.

“The President is inciting violence against a sitting congresswoman—and an entire group of Americans based on their religion. It’s disgusting. It’s shameful. And any elected leader who refuses to condemn it shares responsibility for it,” Warren tweeted.

Sen. Sanders called for an end to the “disgusting and dangerous attacks” against Omar.

“Ilhan Omar is a leader with strength and courage. She won’t back down to Trump’s racism and hate, and neither will we. The disgusting and dangerous attacks against her must end,” Sanders wrote.

Other presidential hopefuls were notably more vague about the president’s video. Beto O’Rourke didn’t mention Omar’s name in his tweet.

“We are stronger than this president’s hatred and Islamophobia. Do not let him drive us apart or make us afraid,” O’Rourke wrote.

Sen. Amy Klobuchar noted that she had disagreed with Omar in the past, but said that the video was “wrong.”

“Someone has already been charged with a serious threat on Congresswoman Omar’s life,” Klobuchar said. “The video the President chose to send out today will only incite more hate. You can disagree with her words—as I have done before—but this video is wrong. Enough.”

Other candidates were initially quiet about the video, but responded on Saturday afternoon.

Kamala Harris criticized the president for “sowing hate and division.”

“For two years, this President has used the most powerful platform in the world to sow hate & division. He’s done it again. Putting the safety of a sitting member of Congress @IlhanMN at risk & vilifying a whole religion is beyond the pale. I’ll be blunt — we must defeat him,” Harris wrote.

Kirsten Gillibrand, who also responded Saturday afternoon, decried Trump’s video but appears to criticize Omar for “minimizing” the pain of 9/11.

“As a Senator who represents 9/11 victims, I can’t accept any minimizing of that pain,” Gillibrand wrote. “But Trump’s dangerous rhetoric against @IlhanMN is disgusting. It’s a false choice to suggest we can’t fight terrorism and reject Islamophobic hate at once—a president should do both.”

Cory Booker, who had in the past expressed criticism about Omar’s comments, has not yet commented. Former Vice President Joe Biden, who has not yet declared his candidacy, does not appear to have weighed in about the controversy. 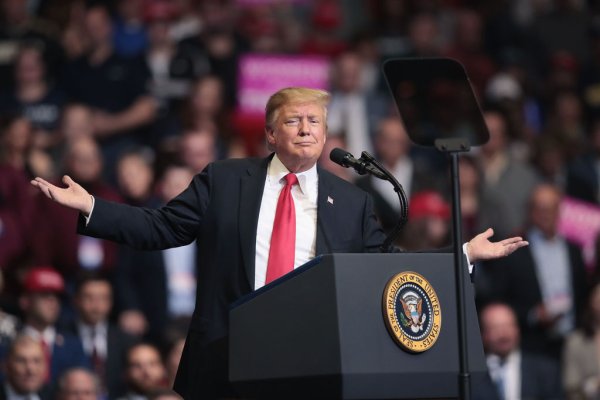