Those Two Pussy Riot Women? They're Not Actually in the Band Anymore

The Russian punk group Pussy Riot is often conflated with its two most famous members, but the other members of the collective have become prominent objectors in their own right. They object to the fame of the first two.

The BBC reports that six members of Pussy Riot have signed an open letter on the collective’s blog publicly severing their relationship with Maria Alyokhina and Nadezhda Tolokonnikova, who were famously jailed for staging an anti-Putin protest outside a Moscow cathedral.

The six Pussy Riot members said that Alyokhina and Tolokonnikova had strayed from the “ideals of our group — feminism, separatist resistance, fight against authoritarianism and personality cult.”

One particular sticking point was the wayward pair’s recent appearance at an Amnesty International benefit concert alongside pop legend Madonna in front of thousands of screaming fans at the Barclays Center — all major departures from the band’s underground ethos.

“Our performances are always ‘illegal,'” the letter stated, “staged only in unpredictable locations and public places not designed for traditional entertainment.”

Still, they parted with some friendly words for their old band members: “The world has acquired two brave, interesting, controversial human rights defenders. Unfortunately, we cannot congratulate them with this in person, because they refuse to have any contact with us.” Well, almost friendly.

When asked about the claims of their band members at a press conference before the Amnesty Concert on Wednesday, Alyokhina and Tolokonnikova, said, “When we were jailed, Pussy Riot immediately became very popular and widely known, and it turned from just a group to essentially an international movement. Anybody can be Pussy Riot, you just need to put on a mask and stage an active protest of something in your particular country, wherever that may be, that you consider unjust. And we’re not here as the leaders of Pussy Riot or determining what Pussy Riot is and what it does or what it says. We are just two individuals that spent two years in jail for taking part in a Pussy Riot protest action.”

The band has always maintained that anyone can join or be involved — including those who speak out about Russia’s problems beside Madonna.

This post was updated to include the statements of Maria Alyokhina and Nadezhda Tolokonnikova.

— with reporting by Eliana Dockterman 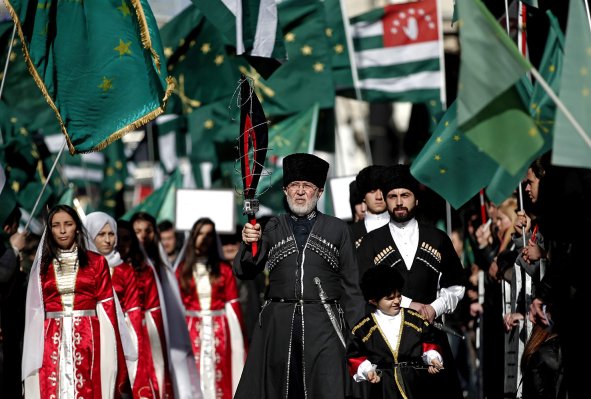 Sochi Olympics Stirs Nationalism of an Exiled People
Next Up: Editor's Pick