5 Songs You Need to Listen to This Weekend

This week, the first of Avicii’s posthumous releases — “SOS” — comes out with Aloe Blacc. BTS blows up the web on their new album Map of the Soul: Persona and their Halsey single, a K-pop confection called “Boy With Luv.” Lykke Li and Mark Ronson make for an unexpectedly well-matched pair on “Late Night Feelings.” Jessie Reyez and 6LACK also team up for the moody, mellow duet “Imported.” And British singer-songwriter Charlie Cunningham folds in some Spanish-style guitar to his new song “Don’t Go Far” with a tender, warm result.

Tim Bergling may be gone, but his music lives on, with a group of dedicated collaborators joining together to finalize what the Swedish DJ was working on before his 2018 death in an upcoming album named TIM. “SOS” is the first of these new posthumous releases, a lush and glittering dance track with Blacc’s soulful vocals adding depth to the electronic production. (Blacc is also the featured voice on Avicii’s big hit “Wake Me Up,” so it sounds familiar in tone.) Despite its title, “SOS” has a celebratory feel, even if the lyrics are deeply bittersweet. “I don’t need my drugs, we could be more than just part-time lovers,” Blacc sings; “I’d let go, but I don’t know how.”

To herald their new era and the debut of album Map of the Soul: Persona, K-pop’s BTS tapped Halsey for a collaboration on “Boy With Luv,” a pop-forward, sparkling track that balances BTS’s reflective Korean lyrics and rapping with Halsey’s melodic chorus vocals; notably, she also chimes in with Korean, making for a crossover moment that still maintains BTS’s strong identity. “From the moment I met you, my life was all you,” Suga raps in Korean; “You’re the star that turns ordinaries into extraordinaries.” That’s a fair retelling of how the seven members have managed to summit K-pop and world charts; the song is, in many ways, a winking homage to the fans (or ARMY) that have buoyed them to the top. Come for the feel-good pop vibe, but stick around for the video, which shows off the boys’ dancing in a series of surreally colorful sets.

DJ and producer Mark Ronson has had his hand in some of the past year’s biggest musical releases, from A Star Is Born‘s “Shallow” to the Miley Cyrus collaboration “Nothing Breaks Like a Heart.” This time, he’s teamed up with Swedish pop singer Lykke Li. On her own, Li’s music veers towards the haunting side, a little dark and emotional. Ronson, meanwhile, loves his bouncy jazz and funk. So the combination here is refreshingly unexpected, Li’s breathy vocals floating lightly above his warm composition as she muses about those late-night doubts that keep us all awake. Ronson’s album, of which this is the title track, will be out June 21.

“Imported” starts out with 6LACK introducing himself (that’s pronounced “black,” he notes), before Jessie Reyez eases in, taking over as he steps back. It’s a creative approach to a duet, two points of view that intertwine every so often but give both equal chances to flex their artistry. 6LACK plays this one with easy-going charm, more like R&B than rap. Reyez, meanwhile, uses the surprising flexibility of her voice — sometimes a pretty rasp, sometimes a total break, sometimes a nimble rap — to tease out the emotional vulnerability of the song. “You’re in love with somebody else,” she complains. “Maybe I could offer some help… but you may OD if you get too much of me.” Insecurity sounds good when it’s presented like this.

Another week, another lush-voiced acoustic British singer-songwriter. London-based Charlie Cunningham’s twist: the inclusion of Spanish-style guitar plucks, which he picked up after spending a few years learning the skill in Spain. The lovely “Don’t Go Far” is filled with sensitivity and longing, warm with his flicks at flamenco and tender in its lyrics. “We should try to let go, even though it’s hard,” he sings, “but don’t go, don’t go far.” There’s sweetness but also a sad resignation: some people aren’t meant to stick around, but that doesn’t mean it’s any less hard to watch them go. 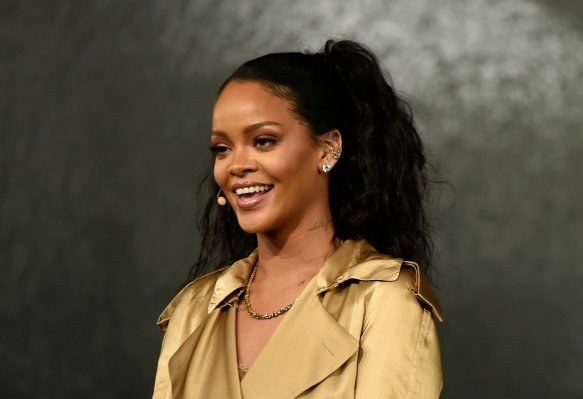 Here's How You Can Take a Trip to Guava Island with Childish Gambino and Rihanna Today — No Flight Required
Next Up: Editor's Pick