Wikileaks is at the center of major questions in Robert Mueller’s investigation, including whether anyone involved in Donald Trump’s presidential campaign assisted the organization in releasing hacked materials. But the charge in the one-count indictment against Wikileaks founder Julian Assange unsealed on Thursday shortly after his arrest doesn’t speak to those questions or broader First Amendment issues.

In an indictment dated March 6, 2018, the United States charges Assange with one count of conspiracy to commit computer intrusion. The indictment alleges “that in March 2010, Assange engaged in a conspiracy with Chelsea Manning, a former intelligence analyst in the U.S. Army, to assist Manning in cracking a password stored on U.S. Department of Defense computers connected to the Secret Internet Protocol Network, a U.S. government network used for classified documents and communications.”

Conspiracy to commit computer intrusion, which violates the Computer Fraud and Abuse Act, is the “meat and potatoes” in the world of computer crime, says Paul Rosenzweig, who teaches at the George Washington University School of Law and was deputy assistant secretary for policy at the U.S. Department of Homeland Security. “Almost everybody that you see who’s charged with a computer fraud of some sort gets a charge that’s somewhere like this.”

This fits with the typical prosecutorial strategy of charging someone with a smaller, more easily provable crime in what could be a larger criminal context. “The conspiracy component of it can be pretty easy to prove, that there had to be some degree of coordination of efforts and action,” says Thomas Holt, a professor in the School of Criminal Justice at Michigan State University who is an expert in computer hacking. “So conspiracy is a way to… treat it as low-hanging fruit where you can at least demonstrate through email and other communications that they were working in some degree in concert to produce an outcome.”

Limiting the indictment against Assange to this one, narrower charge and not charging him with espionage leaves aside any First Amendment questions that could have been raised about Wikileaks publishing classified material. “There has been a lot of speculation that the U.S. would indict Assange merely for distributing classified material,” former federal prosecutor Renato Mariotti wrote on Twitter. “You have heard a lot of concern about that, and it is justified. Many legitimate press publications in the U.S. distribute classified material at times.”

But this indictment does not charge Assange with a crime related merely to the publication of the material. Rosenzweig offers this analogy: If a journalist has sources offering classified documents, the journalist can publish those documents and this indictment against Assange has no bearing on that. But if a source tells a journalist there are documents behind a locked door, and the journalist offers to help pick the lock, that’s when it becomes a crime. “You as a journalist have become engaged in a criminal enterprise in a way that’s different from normal journalist behavior,” Rosenzweig says of that scenario.

This is where relevance to Mueller’s Russia investigation comes in. In 2016, hackers that the U.S. government believes to have been directed by the Russian government hacked the Democratic National Committee and Clinton’s campaign chairman John Podesta. Batches of the hacked emails were released by Wikileaks. Mueller indicted Russian intelligence officers for crimes related to this operation, but he did not charge Assange.

There are two key relevant questions in Mueller’s investigation. The first is how the hacked material made its way from Russia’s Internet Research Agency to Wikileaks, and whether Trump advisor Roger Stone or anyone else associated with the campaign was in that chain of custody. The second, related question is whether Stone or anyone else in the campaign assisted in targeting the hacking or selecting and timing the release of hacked material. (Stone has been charged with lying to Congress and obstructing an investigation into his communications with Assange. Former Trump lawyer Michael Cohen also testified that he was present for a July 2016 phone call during which Stone informed Trump that Assange was planning to publish hacked Democratic emails.)

As in Rosenzweig’s analogy, if Stone or another member of the campaign simply knew about the information in advance, that likely wouldn’t be a crime. But if they conspired in the hack, that could be.

Attorney General William Barr has said Mueller’s investigation did not establish that anyone on the Trump campaign conspired with Russia to influence the election.

For now, this single-count indictment against Assange for activity from nine years ago doesn’t seem to have direct bearing on lingering questions from the Mueller investigation. And Mueller hasn’t recommended any more charges to come directly from his office. But Assange and Wikileaks loom over multiple aspects of Mueller’s investigation, and more details may surface in the coming days when Barr releases a redacted version of the report.

-With additional reporting by John Walcott/Washington 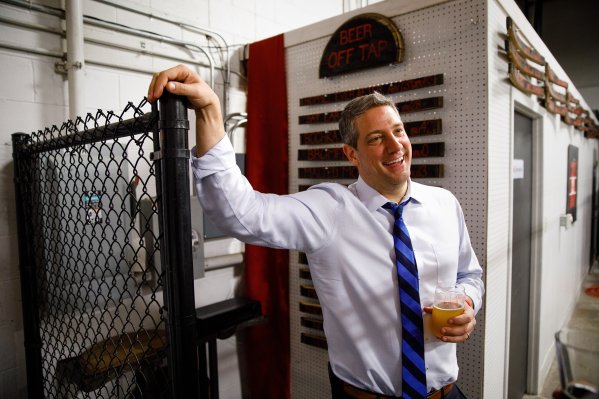 Tim Ryan Is Trying to Break Through in the 2020 Field With a Midwestern Message
Next Up: Editor's Pick