Michael Avenatti Indicted on Charges He Defrauded Paraplegic Client, Others Out of Millions

Michael Avenatti, who is best known for representing adult film actress Stormy Daniels in her suit against President Donald Trump, has been indicted on 36 federal charges in California related to his legal practice.

Among the allegations made by the Internal Revenue Service and federal prosecutors in Los Angeles on Thursday are charges that he withheld a $4 million settlement from a paraplegic man and used it to help fund his own lavish lifestyle and to prop up his coffee business and racing team.

The indictments against Avenatti are for wire fraud, tax fraud, bank fraud and bankruptcy fraud. If convicted, he faces up to 335 years in prison.

It’s the latest legal trouble for the onetime cable news darling and 2020 presidential hopeful. In March, Avenatti was arrested on charges that he tried to extort more than $20 million from Nike for a case involving high school basketball players. He was released on a $300,000 bond and told reporters after a court appearance that he is “highly confident” that he will be exonerated.

On Thursday, following the grand jury indictments in California, Avenatti declared that he plans “to fully fight all charges and plead NOT GUILTY.” He also tweeted a signed statement from Geoffrey Johnson praising Avenatti for advocating for him. The Los Angeles Times reported that Johnson is the paraplegic man whom he allegedly withheld the multimillion-dollar settlement from.

“Any claim that any monies due clients were mishandled is bogus nonsense,” Avenatti tweeted. “By way of example only (there are MANY more like this), here is a document Mr. Johnson signed less than a month ago attesting to my ethics and how his case was handled. I look forward to proving my innocence.”

In the indictment, prosecutors allege Avenatti stole millions of dollars in settlement money from five clients. Prosecutors said he allegedly told Johnson that he had not received the payout from a settlement from Los Angeles County yet, but instead gave him at least 69 payments worth an estimated $124,000 in total and paid for his assisted living facility. Avenatti told his client that these payments were “advances” on the settlement.

Avenatti used another $2.5 million in settlement money belonging to another client to help pay for a private jet, the indictment said. The plane has since been seized by federal authorities.

The indictments include the two charges filed against him in March, including allegations that Avenatti submitted fake financial information to a Mississippi bank in order to get three loans worth $4.1 million.

United States Attorney Nick Hanna said that Avenatti’s crimes were “linked” because they used money that he had obtained illegally to help perpetuate other crimes.

“Money generated from one set of crimes appears in other sets – typically in the form of payments to lull victims and to prevent Mr. Avenatti’s financial house of cards from collapsing,” Hanna said in a statement. 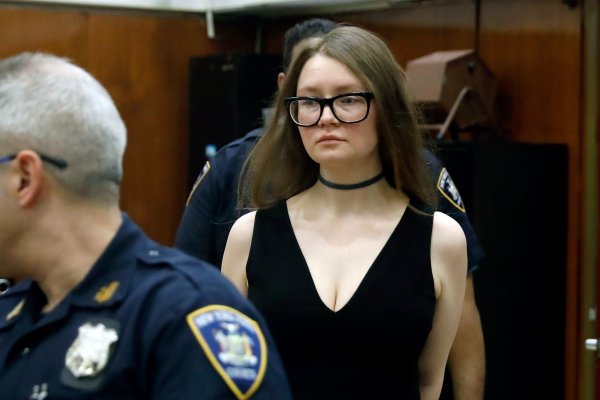 'Soho Grifter' Anna Sorokin Is Sentenced
Next Up: Editor's Pick