Derrick Nelson, who was the principal at New Jersey’s Westfield High School, never recovered after falling into a monthlong coma following a bone marrow donation procedure at a Bergen County hospital, his father told NJ.com. Nelson died Sunday at age 44, though the exact cause of his death was unclear, his father said; he told ABC News that his son may have had a heart attack.

Nelson was donating bone marrow to supply stem cells to a 14-year-old boy in France with an undisclosed illness, he told Westfield’s student newspaper before the procedure. “If it’s just a little bit of pain for a little bit of time that can give someone years of joy, it’s all worth it,” Nelson said during the interview.

Students and public officials alike are publicly mourning Nelson, who was reportedly engaged to be married and had a six-year-old daughter. In a letter sent to students and parents, according to NJ.com, Westfield School District Superintendent Margaret Dolan wrote that, “Dr. Nelson touched us all with his kindness, compassion, integrity, and endlessly positive attitude. We hold him and his family in our hearts as we grieve this loss together.”

Westfield Mayor Shelley Brindle called Nelson “a man of immense character and kindness,” and said her family was “devastated” by his death.

New Jersey Gov. Phil Murphy wrote that Nelson “embodied all that makes New Jersey great,” adding that “his final act was one of selflessness.”

Community members have even started a Change.org petition to rename Westfield High School in honor of Nelson, and have collected nearly 15,000 signatures. Nelson’s funeral is scheduled for April 16. 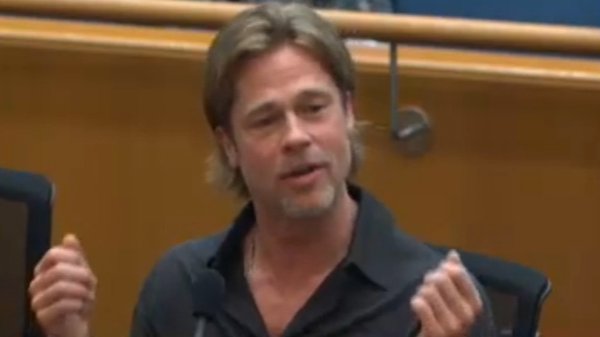 Brad Pitt Told to 'Wrap It Up' by County Official During Heartfelt Speech for L.A. Art Museum
Next Up: Editor's Pick