'The Space I’m Occupying Isn’t Just for Me.' Lizzo Fulfills Her Own Self-Love Prophecy

There’s a Lizzo lyric for every problem. Feeling less than beautiful? “Mirror, mirror on the wall,” Lizzo sings on “Juice,” “Don’t say it, ’cause I know I’m cute.” Had a rough day? “Come now, come dry your eyes/You know you a star, you can touch the sky,” she soothes on “Good as Hell.” Need to dance? Throw on “Tempo,” her recent collaboration with Missy Elliott. Lizzo’s music spans from straight-up hip-hop to guitar-blazing soul to anthemic funk-pop, but no matter the medium, the message is one of joy and empowerment. It’s feminism writ large, boisterous and unapologetic, in a style that feels entirely of this moment.

But Lizzo has greater ambitions than her own artistry. “The space I’m occupying isn’t just for me,” she says, taking a break to eat lunch between rehearsals for her upcoming tour. “It’s for all the big black girls in the future who just want to be seen.”

Lizzo–who sings, raps, dances and plays classical flute–isn’t the only artist spreading a message of self-worth, body positivity and unabashed female sexuality this year. The world of hip-hop and nominally “urban” music–long a space where men posture and women are objectified–is becoming a bastion of female strength and storytelling. In hip-hop, the personal has always been political, as artists mined life experiences to tell stories about the world we live in. But women have always had to fight for space in the genre, even as early rappers such as Missy Elliott and Lauryn Hill blazed a trail and successors including Nicki Minaj and Cardi B kicked the door open wider. The new artists breaking out are women whose messages are in line with the cultural movements surrounding feminism, identity and visibility.

Like Lizzo–real name Melissa Jefferson–who grew up in Houston. From a young age, she practiced classical flute. In college, she tried to balance playing in the marching band with her other skill: rapping. She dropped out, living out of her car while dealing with the death of her father. “His legacy to me was that he always wanted me to do [music], so why would I stop now?” she remembers. “That’s the only thing that kept me going during that time. There was nothing else.” She ended up in Minneapolis, where at her very first show a fan stopped her as she exited the stage. “She told me, ‘We need you. We need you to live here.'” So Lizzo stayed, honing her skills as a performer, not just as a flautist and rapper, but also as a singer and dancer. At one point, she says, she was playing as many as five shows a night with a number of indie groups. She toured with the indie pop trio Haim, released two EPs and worked with Prince at his famous Paisley Park home.

Now on her major-label debut album Cuz I Love You, out April 19, Lizzo continues to grow as an artist. She was always multitalented, twerking while playing her flute onstage, switching from rapping to singing in quick succession, and applying music theory to her dance tracks. Listeners seem ready to embrace that full range; “Juice,” which she has performed to energetic audiences on The Tonight Show Starring Jimmy Fallon and Ellen, has more than 22 million Spotify streams.

Growing up, Lizzo says she lacked role models in whom she could see herself. “I have to be that person because I don’t see that person,” she says. “Because of who I am, my story happens to have a message to it.” She insists that her music speak for itself; it’s not her job, she says, to be a “beacon of change.” But it might be happening anyway, as she prompts listeners to look beyond the traditional confines of genre.

The history of hip-hop often skims over the contributions of its female voices. But they’ve been there all along: early MCs like Roxanne Shanté and Queen Latifah shaped rap in its nascent stages; Salt-N-Pepa and Foxy Brown set records with their chart-topping hits; and rappers like Lil’ Kim and Eve made names for themselves as outspoken artists who were forthright about their sexuality.

But as Columbia Records’ co-head of urban music Phylicia Fant explains, many–if not all–of these women received a co-sign from powerful male rappers, or were the singular girl in a hip-hop crew. And the composition of the industry at large, from the DJs to the radio programmers to the journalists, also skewed male, adds Tuma Basa, YouTube’s director of urban music. In turn, the audience for hip-hop was understood to be mostly men.

It’s only recently, thanks to the music streaming boom and the power of social media, that women in the world of hip-hop have been able to make their mark without receiving structural support from men. Women now, Fant says, understand they can do it on their own: “I don’t need a co-sign. I don’t need a crew. I’m using social media. I’m doing it my way.” This, she says, gives them the ability to “control their narrative before someone else can.” Basa agrees: “We’ve moved from the gatekeeper era to the tastemaker era.” He calls it the “Cardi B effect”: By gaining acceptance in the hip-hop community and scoring massive hits like “Bodak Yellow,” the Bronx-born rapper helped identify a female audience for rap and drew a blueprint for more artists to follow. “We’re experiencing a market correction,” Basa says. “Whatever sexism or exclusionism existed before, the platforms are evening it out.” Still, progress is slow; Spotify’s most popular hip-hop playlist, RapCaviar, listed almost entirely male artists in early April. “Even if there’s a shift, we’re not at the mountaintop,” Lizzo says.

While Basa is hesitant to categorize Lizzo as specifically hip-hop–her music spans genres and incorporates many pop elements–she’s not the only woman of color who raps and is earning a following for her specificity, creativity and a message that’s tailored to a female audience. Rappers like the Grammy-nominated short-form specialist Tierra Whack; the masked Brooklyn artist Leikeli47; and the R&B-influenced, cerebral Noname represent a diversified new look and sound for the scene, refusing to conform to the expectations of the male gaze–or male listeners. Leikeli47 titled her 2018 album Acrylic, winking at the typically female ritual of nail care, while a recent–and notorious lyric–from Noname implied that one of her body parts “wrote a thesis on colonialism.” Others, like CupcakKe, Saweetie and the duo City Girls have also developed followings for their smart rhymes. “Every woman out there is looking for someone to connect to,” Fant says. “Now these young women have different options.”

For years, the few women who created a space for themselves in hip-hop have had to play by men’s rules; even Nicki Minaj and Cardi B, the genre’s two biggest contemporary stars, have been marketed with an eye to mass appeal, from their branding to the male artists with whom they’ve collaborated. This new wave of female artists, by comparison, are leading with their idiosyncrasies.

“These women who are telling their stories–look at how they look,” Lizzo says. “Have you ever seen anything like that before? Is it weird? Does it make you uncomfortable?” To her, it’s progress to have female artists in the public eye who don’t adhere to narrow standards of beauty or femininity. “It feels novel because we’re not the norm,” she says. “I post a lot of naked pictures of myself–one, because I look good, but two, because I want to normalize it. When I post these things, it’s not to be provocative. I’m sick of black women being [seen as] provocative because you’re not used to us.”

Fant says Lizzo’s confidence has effects beyond her own artistry, throughout the industry. “She represents a dream realized for women of color,” she says. “She shows me that we are not invisible.”

None of this would matter without great songs to back it up. But Lizzo’s sound, like her story, is one of undeterred self-love, a jubilant self-help manual delivered in danceworthy song form. You can hear it in “Juice,” a bouncy throwback party tune, or in “Tempo,” which celebrates her body. To Lizzo, the music is her self-care. “When you listen to a Lizzo song, some people might be like ‘Wow, she’s so happy all the time,'” she says. “But no, she’s working on being happy. I want my music to be a self-fulfilling prophecy of where I want my life to be.”

So far, it seems to be working; Lizzo says she’s already hit all her 2019 goals. Maybe biggest of all is her song with Missy Elliott, who in many ways is Lizzo’s precursor–an artist who showed her what might be possible in her own career. “She handed me a beautiful torch,” Lizzo says. Then she backpedals: “Maybe she doesn’t feel that way–maybe it would be wrong to assume that! But whatever she gave me, I’m clutching it so tightly.” 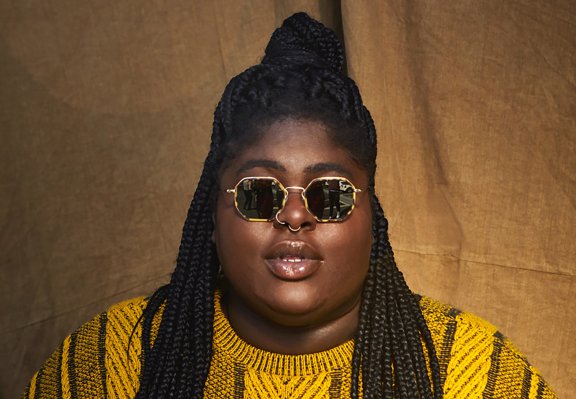 Why Chika, the Rapper Who Went Viral for Calling Out Kanye, Wants to 'Bring Back What's Real' to Hip Hop
Next Up: Editor's Pick