Thai authorities said Wednesday that they will prosecute social media users who share pictures and videos of “indecently dressed” women and transgender individuals during the country’s Songkran celebrations this weekend.

The Bangkok Post reports that those found guilty could face a maximum of five years in jail, a fine of more than $3,000, or both. People seen acting inappropriately in pictures and videos have been warned that they could also face charges of committing obscene acts in public.

Thailand’s traditional New Year, known as Songkran, is commonly celebrated with what is known as the world’s biggest water fight. The three-day-long holiday is marked by revelers splashing water over each other.

The warnings over photo sharing come just days after organizers of the annual Songkran party on Bangkok’s Khao San Road announced that the celebrations were being canceled this year to make way for the coronation of King Maha Vajiralongkorn. The party at the famed tourist strip normally draws large throngs of travelers and locals alike, with establishments providing provide vats of water and an assortment of water guns and buckets for their use.

Although many people commemorate the festival with water fights, Songkran, has a more subdued, spiritual side with devout Thais visiting temples to pour water over Buddha statues, and over the hands of the elderly, as a ritual of blessing and purification.

Siriwat Dipho, the deputy commander of the police’s Technology Crime Suppression Division, told the Bangkok Post that pictures of scantily-clad party-goers were not in keeping with “good Songkran tradition.”

Officers are also enforcing laws to curb traffic violations, including drink driving, which claims annually hundreds of lives during the festive period. In 2018, there were 418 traffic-related deaths during Songkran, up from 390 in 2017, according to the country’s Road Safety Center. 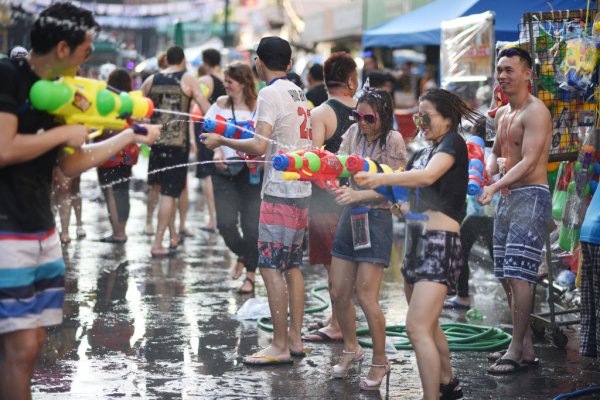 Bangkok Calls off One of Its Biggest Annual Parties
Next Up: Editor's Pick