Kim Jong-un waves as he prepares to leave Vietnam after the Hanoi summit in Dong Dang, Vietnam, on March 2, 2019.
Carl Court—Getty Images
By Youkyung Lee / Bloomberg

Kim Jong Un urged a “severe blow” to those sanctioning North Korea and called on ruling party officials to continue “self-reliance,” signaling his determination to hold the line in talks with U.S. President Donald Trump.

Kim made the remarks Wednesday during a meeting with top leaders of the ruling Workers’ Party of Korea, the state-run Korean Central News Agency said Thursday. He was quoted as telling officials that the country should strike at those who thought they could make it surrender with sanctions, without elaborating.

The meeting comes as Trump prepares to host South Korean President Moon Jae-in at the White House in an effort to rescue nuclear talks that have sputtered since the U.S. leader walked out of a summit with Kim on Feb. 28. The negotiations broke down after North Korea made demands for sanctions relief that the U.S. side believed exceeded the regime’s disarmament offers.

The allies want to discourage Kim from any actions that could provoke Trump and return the two sides to the familiar cycle of threats and counter-threats. North Korea is planning to celebrate the birth of its founder — Kim’s grandfather Kim Il Sung — on Monday, an occasion that the regime has sometimes marked with shows of military might.

A top North Korean diplomat told reporters in Pyongyang last month that Kim would decide “in a short period of time” whether to continue his freeze on nuclear bomb and missile tests. 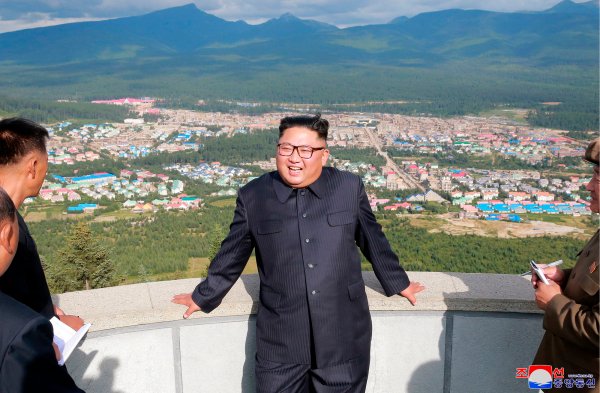 Is Kim Jong Un About to Announce Something Major?
Next Up: Editor's Pick