We Finally Won the Right to Drive in Saudi Arabia. But the Kingdom's War on Women Is Only Getting Worse

Manal al-Sharif, who in 2011 sat behind the steering wheel of a car in Saudia Arabia despite a driving ban for women, reading from her book "Daring to Drive: A Saudi Woman's Awakening" and talking about her life in the Volkstheater in Munich, Germany, 08 October 2017.
Andreas Gebert —picture alliance/Getty Image
Ideas
By Manal al-Sharif
Al-Sharif is a Saudi Arabian women's rights activist and the author of Daring to Drive: A Saudi Woman's Awakening. In 2011, she was detained after filming herself driving through the Saudi city Khobar, an act that was prohibited at the time.

Manal al-Sharif co-founded the Women2Drive movement in Saudi Arabia in 2011, campaigning for the right of women to drive in the kingdom. In June 2018, the Saudi monarchy eventually lifted a long-term ban on women driving. Al-Sharif, 39, has lived in Sydney, Australia with her four-year-old son for the past two years, and has been unable to return to her homeland after the arrest of fellow women’s rights activists in the country last year. Her 13-year-old son still lives in the Kingdom with his grandmother; al-Sharif has not seen him for over a year. From April 10, al-Sharif is driving across the United States in partnership with Human Rights Foundation to raise awareness of ongoing human rights abuses in Saudi Arabia. Shortly before she embarked on this journey, al-Sharif spoke with TIME about the future of women’s rights in her home country.

Originally, I was planning to go back to Saudi Arabia when the ban on women driving was lifted. I wanted to drive coast-to-coast with my eldest son, to celebrate. If you are a Saudi and you marry a non-Saudi, you need a special permission from the government to marry. I was never granted that permission and so my son is not recognized by the Saudi government. That means they will not issue him a visa to enter the country. So my younger son lives with me in Australia and can’t go back home with me. I have two sons who have never met, who I have never held in my arms at the same time. The only way to be with one is to leave the other.

I was so hopeful with the lifting of the ban. It was a huge step for us because we’ve been fighting this fight for so long. It’s part of something bigger in the guardianship system, where only a woman’s male relatives can make important life decisions for her. It acknowledges that women are independent adults, who do not rely on the permission of men. Despite my plans to return when the ban was lifted in June 2018, I couldn’t after 11 other activists were arrested. When the women were sent to jail in May 2018, it was a very clear sign from the government that these were not real reforms. Put simply: it’s a war on women.

The only charges the women in jail today are facing are contacting foreign organizations. Those foreign organizations are human rights organizations. The way they have been tortured, put in solitary confinement and have been subject to a smear campaign and character assassination by the pro-government media shows how scared the authorities are of these women, and how powerful and effective they are. These women were hunted down and taken from their homes. Women living abroad were flown back to Saudi Arabia and literally kidnapped — women like Loujain al-Hathloul, a vocal advocate for women’s rights who was abducted while driving in the United Arab Emirates in March 2018. She was brought back to Saudi Arabia on a private jet, where she is still in jail.

The activists were put in a secret prison, where they were tortured and sexually assaulted. This information has even been confirmed by their families. Although in late March, some of the activists were temporarily released, the brutal way these women were treated shows that this government is not supportive of women’s rights or reforms.

The government doesn’t understand that they need us. Activists are the most patriotic people, because they are fighting for a better country; they are not traitors.

What happened the last two years is a huge crackdown on activists, especially peaceful activists who used social media. Social media was the place where where we could talk, where we could discuss — it was our virtual parliament. As a citizen of Saudi Arabia, you live in one of the richest countries in the world, but you don’t own your own life, you don’t own your own decisions.

There were a lot of red flags on the outside, like with the war in Yemen and the brutal Qatar embargo, but then the war moved inside Saudi Arabia. It started as a war against people who joined terrorist groups, but it has now morphed into a war targeting activists and the social media influencers — many of whom are in jail today. There have been huge efforts from the government to propagate its agenda on social media and to influence the discourse in an unprecedented way. The Saudi regime now has a kind of power over their citizens in a way that they didn’t even dream of ten years ago. It is really painful for us to see. The same tools we use to push for social change are being used to undermine us and put our lives in danger.

Saudi activist Manal Al Sharif flashes the sign for victory as she drives her car in Dubai on October 22, 2013, in solidarity with Saudi women preparing to take to the wheel on October 26, defying the Saudi authorities, to campaign women's right to drive in Saudi Arabia.
Marwan Naamani—AFP/Getty Images

The second part of the story is the reaction of democracies around the world to the assassination of Jamal Khashoggi, which is an assault on freedom of expression, and the indifference of the world to the imprisonment and the torture of these women. Countries can talk about all the values of democracy, but these values should not just be for one set of citizens. If these countries become allied with dictatorships that violate the same values that those democracies call for, this is hypocrisy. This is a double standard.

The assassination of Khashoggi, which took place in Turkey just over six months ago now, cannot be dismissed as an internal issue for Saudi Arabia. You cannot say that when you buy our oil, when you send your companies to develop huge projects and when you accept investments from Saudi money. This is why we have to question the influence of Saudi money on think tanks and policy makers in the U.S. Instead of driving in Saudi Arabia, I moved the drive campaign to the U.S., because Washington and Riyadh are close allies. Ever since President Donald Trump came to the White House, it’s been a green light for the Saudis to get away with human rights violations.

We won’t be anonymous or silent anymore. We will keep speaking up in the face of tyranny and injustice. Those regimes should be the ones who are afraid, not us. I call for a Global Magnitsky Act targeting regimes like Saudi Arabia, legislation that will sanction individuals who commit human rights abuses. It’s time democracies put the values they believe into action.

My drive is a call to act. I couldn’t do the drive cross-country in my own homeland, so I’m doing it in the U.S., moving between cities like Washington, D.C. and Birmingham, Alabama, where American civil rights movements took place. It’s a reminder to revisit these values that humans around the globe were fighting for and are still fighting for. Are we still standing up for these democratic values or not? Martin Luther King Jr. once said “Injustice anywhere is a threat to justice everywhere.” And the fight for women’s rights anywhere contributes to the fight for women’s rights everywhere. 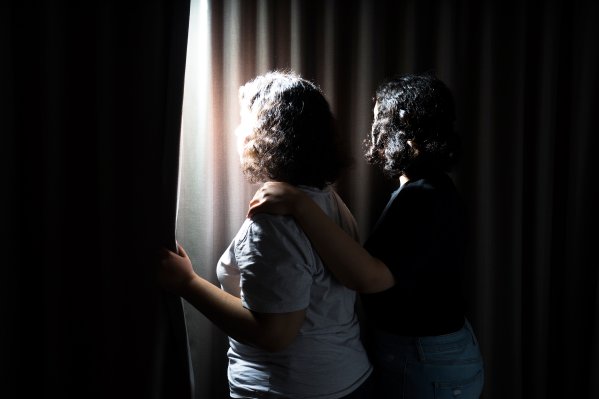