When royal baby Archie Harrison Mountbatten-Windsor was born this spring, the new royal — child of the Duchess of Sussex, Meghan Markle, and the Duke of Sussex, Prince Harry — was instantly ushered into a rarefied world of elite celebrity. And that’s just the immediate family. Thanks to Markle’s showbiz roots as an actress on Suits and a friend of many high-profile activists and stars, as well as Prince Harry’s position as one of the world’s most famous names since birth, both Archie’s mom and dad have their fair share of impressive and often well-known friends.

So while we don’t yet know just who Prince Harry and Markle will choose as godparents for their first royal baby, we do know some of the options on the table, from the famous guest list at their royal wedding last spring to their closest confidantes over their year of marriage. The royals tend to select a bunch of godparents for each child; Prince George, Princess Charlotte and Prince Louis, children of the Duke of Cambridge, Prince William and the Duchess of Cambridge, Kate Middleton, each have five or more godparents who were announced at their christening ceremonies. (They range from childhood friends of the parents to relatives to long-time professional aides.) Neither Prince Harry nor Meghan Markle are godparents to their niece and nephews, however. Harry is a godparent to about a half-dozen of the children of his closest friends, including Florence van Cutsem and Zalie Warren, while Markle is godmother to her friends’ children Remi and Ryan Litt, all of whom appeared at their wedding as bridesmaids and page boys in the British tradition.

US tennis player Serena Williams and her husband Alexis Ohanian arrive for the wedding ceremony of Britain's Prince Harry, Duke of Sussex and US actress Meghan Markle at St George's Chapel, Windsor Castle, in Windsor, on May 19, 2018.
Ian West—AFP/Getty Images

Not only did the famous tennis star help host and organize Markle’s big baby shower bash in Manhattan in February, but she also has a noted history with Markle, attending her wedding and mentioning that they have a supportive texting relationship. (“We have known each other for a long time, but we really kind of are relying on each other right a lot recently,” she said back in September.) As a mother to her own daughter Olympia and wife of Reddit founder Alexis Ohanian, Williams would make for a high-profile godmother — not to mention she brings nothing less than the world’s best tennis skills to the table, in the case that little Archie chooses to try out the sport.

Amal Clooney and US actor George Clooney arrive for the wedding ceremony of Britain's Prince Harry, Duke of Sussex and US actress Meghan Markle at St George's Chapel, Windsor Castle, in Windsor, on May 19, 2018.
Gareth Fuller—AFP/Getty Images

Another set of wedding guests, the popular actor and international human rights lawyer reside in the U.K. as well and are known to socialize with the royal couple. (Amal also went to the New York baby shower.) The two are already parents of twins, leading George to joke at one point that he already has “enough s–t to deal with — literally!” when asked about godparent rumors. But if they do get the additional responsibility, the Clooneys would be sure to teach young Archie how they balance their love of the good life (see: George’s Lake Como home and successful tequila brand) with their longstanding commitments to activism in the name of global justice.

US presenter Oprah Winfrey arrives for the wedding ceremony of Britain's Prince Harry, Duke of Sussex and US actress Meghan Markle at St George's Chapel, Windsor Castle, in Windsor, on May 19, 2018.
Ian West—AFP/Getty Images

We know Oprah attended Markle and Prince Harry’s royal wedding last May, and the beloved media mogul even took the time to hang out with Doria Ragland, Markle’s California-based mom, with whom she shared fruit and practiced yoga. Not only would Winfrey be an excellent source of wisdom, as we all know thanks to her longstanding status in the U.S. as everyone’s benevolent spiritual guru, but she would apparently also make for a source of fresh fruit. (Plus, she has great book recommendations.)

Actress Meghan Markle and Jessica Mulroney attend the Instagram Dinner held at the MARS Discovery District on May 31, 2016 in Toronto, Canada.
George Pimentel—WireImage

This Canadian pair — Jessica is a stylist and TV personality, while Ben is a TV host and the son of the country’s former prime minister — are high up on the “likely” list for godparent status; Markle and Mulroney have been close for years since Markle was still an actress on Suits and Prince Harry was visiting Canada for the Invictus Games. With the Mulroneys in royal baby Archie’s life, the fashion police could stand down forever. (And they would always be welcome in Canada.)

There would be a few perks to being actress Priyanka Chopra’s godchild: for one, she’s married to singer Nick Jonas, whose famous Jonas Brothers boy band has just re-launched their career with a chart-topping album. (Assuming they continue on with a long and fruitful next few decades as a group, á la the Backstreet Boys, young Archie could have some very highly sought-after backstage access to future tours.) But more importantly, Chopra has proved herself as long-time UNICEF Goodwill Ambassador who shares in Markle’s feminist beliefs.

Prince Harry is already a godparent to his royal cousin Zara Tindall’s newest daughter Lena Elizabeth, so it would only make sense for him to return the favor. Tindall, the daughter of Princess Anne and Mark Phillips, is the Queen’s eldest granddaughter. She would be a trusted insider confidante for the new royal, and could help teach him or her the ropes about being part of the high-profile family. Plus, Tindall is a celebrated equestrian, even making Olympic appearances for the U.K.—and could help train up the young Sussex in the equine skills department.

Princess Eugenie and Princess Beatrice have always had a positive relationship with Prince Harry. As his cousins, they have often stepped up to perform royal duties and appear at public events, while also engaging in their own careers; Eugenie works in the art world as a gallery director in London, while her older sister Beatrice has mostly focused on charitable endeavors. Plus, their ubiquitous collection of hats would be fun for a godchild to get to play dress-up with.

Tom Inskip (left) attends the wedding of Jake Warren and Zoe Stewart in the Wren Chapel at the Royal Hospital Chelsea on December 14, 2013 in London, England.
Max Mumby/Indigo—Getty Images

One of Prince Harry’s oldest friends, Tom “Skippy” Inskip is a school pal going back to Eton days. Prince Harry attended his wedding in Jamaica in 2017 with Markle as well. Despite tabloids suggesting there is a rift between the pair, nothing has been discussed publicly. Inskip and Prince Harry were known to vacation together when they were younger, and even both had partial ownership of a racehorse named “Usain Colt,” which would suggest Inskip could be something of the “fun godfather” type, if he were to be named.

Charlie van Straubenzee is a school friend of Prince Harry’s, and invited Markle and the Prince to his 2018 nuptials with Daisy Jenks. His brother, Thomas, is already a royal godparent, having been named to the role for Prince William’s daughter Princess Charlotte — so he should know what’s expected of the task. He has been part of the two princes’ inner circle since they were young.

Another of Prince Harry’s old pals, Jake Warren was one of late Princess Diana’s godsons as well. The pair are often spotted together at the annual Royal Ascot horse races, as Warren is the son of the Queen’s horse racing manager. Seems like he’d be able to help any godchild of his pick a winning horse. Warren’s daughter Zalie also was one of Meghan Markle’s young bridesmaids at their wedding — and Prince Harry is her godfather, too. 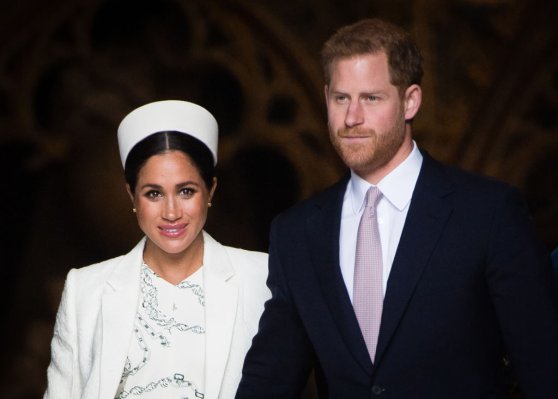