President Donald Trump seems to be getting ready to run for reelection. On Tuesday he posted a video on Twitter that looked like it was part of his 2020 reelection campaign. The video which featured images of Democratic leaders Barack Obama and Hillary Clinton as well as comedians and Trump critics, including Rosie O’Donnell and Amy Schumer juxtaposed with images of Trump from his first two years in office, including his meetings with North Korean dictator Kim Jong Un and Brazil’s president Jair Bolsonaro. As the music soars a rallying cry appeared on the screen: “First they ignore you, then they laugh at you, then they call you racist. Donald J. Trump. Your vote. Proved them all wrong. Trump: The Great Victory. 2020.” The video ends with Trump raising his fist into the air just as the video’s score hit a dramatic crescendo.

It quickly amassed over two million views, but then, the video was no longer available. Turns out, the dramatic score used in the video was taken without permission from The Dark Knight Rises, violating Warner Bros. Pictures copyright. Specifically, the video was soundtracked by Hans Zimmer’s track “Why Do We Fall” from the The Dark Knight Rises and the creator of the video had not licensed it or sought permission to use the video before the president posted it to Twitter. The video also borrows the font lifted from the film’s title cards, Variety reports.

In a statement released Tuesday night, Warner Bros. confirmed it was taking action over the video. “The use of Warner Bros.’ score from The Dark Knight Rises in the campaign video was unauthorized,” a spokesperson said. “We are working through the appropriate legal channels to have it removed.”

By late Tuesday night, the video in Trump‘s tweet had been replaced by a message that it was no longer available “in response to a report by the copyright owner.”

According to Buzzfeed News, the video seems to have originated in a YouTube video posted to a Reddit thread. At the time of removal, the video had racked up over two million views on Twitter. The original video was also removed from YouTube, where it had amassed over 65,000 views.

For the business-minded, Warner Bros. is a subsidiary of WarnerMedia, which was recently acquired by AT&T despite the fact that one of Trump’s campaign promises was block the merger.

Warner’s copyright claim to the campaign video comes just a few months after HBO criticized Trump for misusing the Game of Thrones trademark. Trump had used the Game of Thrones font and riffed on the show’s longtime slogan, “Winter Is Coming” in a tweet promising sanctions against Iran. Trump did not remove the image image despite HBO’s statement that they “would prefer our trademark not be misappropriated for political purposes.” On Twitter, the network added, “How do you say trademark misuse in Dothraki?” 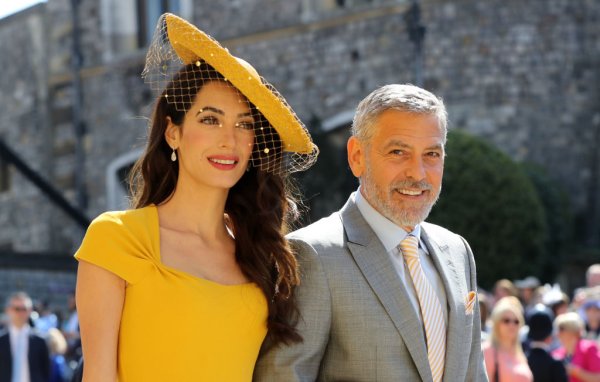 Here Are Some of Meghan Markle's Baby's Potential Godparents
Next Up: Editor's Pick