President Donald Trump likes having temporary office holders in his Cabinet, but one researcher found that it may actually hurt him.

While Trump argued that having acting Cabinet officials gives him “more flexibility,” research by Stanford law professor Anne Joseph O’Connell has found that acting officials have less influence within their agencies and a harder time enacting policies.

“It’s not clear to me that having actings helps the President achieve his objectives,” she told TIME.

Trump’s chief of staff, Mick Mulvaney, also serves in an acting capacity as does Jonathan Cohen, the ambassador to the United Nations.

By filling vacancies in his Cabinet with officials serving in an acting capacity, Trump is able to bypass Senate confirmation of his picks. He has been open about the advantages of having Cabinet members in acting positions.

“I like acting. It gives me more flexibility,” Trump told reporters in January as he headed to Camp David. “Do you understand that? I like acting. So we have a few that are acting. We have a great, great Cabinet.”

But O’Connell’s research, published in the Southern California Law Review in 2009, found that Senate confirmations strengthened the internal positions of Cabinet secretaries, who were able to move more quickly on their agendas. Acting officials typically don’t have the stature to implement new programs or regulations that would have significant effect, and lack the access to the networks that would get them help from the White House and other agencies, O’Connell wrote.

“Temporary political picks have less political capital to spend externally and internally,” O’Connell wrote. “Even proper appointees have to get up to speed at the start of their government service; therefore, frequent turnover among confirmed appointees also fosters agency inaction.”

O’Connell also noted that acting heads often do not have the authority to direct their employees to take up work beyond basic functions, she wrote. And worker satisfaction in departments that have had acting secretaries has declined, according to the Partnership for Public Service, which found low employee engagement at the Department of Homeland Security and the Consumer Financial Protection Bureau, among other agencies, in a 2018 survey.

While Trump stays within the stipulations of the Federal Vacancies Reform Act, set in 1998 to establish the procedure for filling vacant positions in the executive agency, legal scholars say the rate at which he has appointed acting officials to his Cabinet is concerning. The high turnover among senior leadership in Trump’s Administration has become one of the defining pillars of his presidency. Nielsen’s resignation marks the 15th departure of a Cabinet member, according to the Brookings Institution.

“All of this is very troubling,” says Jon Michaels, a professor at the UCLA School of Law. “This is a shocking level of turnover. It is, to some extent, sidelining the Senate. In the normal course of things, there’s a more regular period of transition.”

The Vacancies Act is an “important stop-gap measure,” says O’Connell. Trump, she says, does not seem to view it in the same way. “The strategic use of the act in this administration does not seem to be in that spirit.”

Thus far, no one has reached that limit in Trump’s presidency, according to O’Connell. That record goes to Rebecca Blank, who served as acting secretary of Commerce from 2012 to 2013 under the Obama Administration.

Still, so many acting officials points to a sense of constant flux within Trump’s circles, Michaels says.

“You’re hollowing out the upper echelon of those agencies. Is he going to go on acting secretaries until the election?” he asks. “Even in a more competent administration, it’s a hell of a lot of work to get someone through the Senate. It’s not the easiest process in the world. Meaning, you should think twice before canning everyone.” 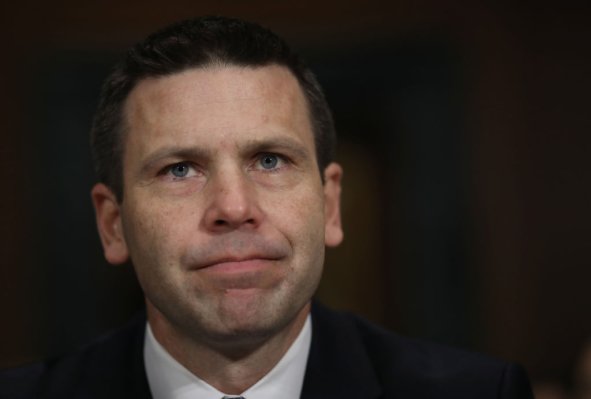