Nine Hong Kong activists behind the pro-democracy demonstrations in 2014 were convicted Tuesday on public nuisance and incitement charges, a verdict that some fear portends a creeping erosion of freedom of expression in the semi-autonomous Chinese enclave.

According to court documents, Tai, Chan and Chu conspired to encourage “unlawful obstruction of public places and roads.” But the three, known as the “Occupy trio” for co-founding the non-violent Occupy Central protest that evolved into a large-scale movement immobilizing the city’s financial district for nearly three months, had pleaded not guilty to public nuisance and other charges.

The other six activists were convicted of varying charges for their involvement in the 2014 campaign, which called for greater democracy and direct elections in the Chinese-controlled city.

Chan said that despite the verdict, his “soul is still.”

“I still believe in the power of love and peace,” Chan told local news outlet Hong Kong Free Press. “And I have no regrets for what I have done.”

Joshua Wong, the student protest leader who became the face of the movement and who was himself sentenced to six months in prison in 2017, told TIME that the verdict indicates China’s intolerance of the democratic challenge.

“It shows that no matter the age, whether the activists are young or more senior leaders like the ones convicted today, the Chinese government wants to target them all,” he says.

Outside the courthouse, the verdict was reportedly met by chanting crowds holding up yellow umbrellas, a symbol of the protests, which were also known as the “Umbrella Movement.”

For 79 days in late 2014, Hong Kong democracy activists camped out in front of government headquarters and blocked major thoroughfares, staging the most significant political uprising China has seen since the 1989 Tiananmen Square protests in Beijing. Police eventually cleared the encampments and arrested hundreds, dampening a movement which failed to win any major democratic concessions.

In a statement emailed to TIME, Man-kei Tam, director of Amnesty International Hong Kong, called Tuesday’s verdict a “crushing blow” for freedom of expression and peaceful protest in the city.

The verdict is the latest event to underscore concerns over Beijing’s commitment to upholding the autonomy and freedoms enjoyed in Hong Kong, but not exercised on the mainland. The former British colony was returned to China in 1997 in a handover agreement that promised a “one country, two systems” model of governance.

Last November, a Financial Times editor was effectively barred from entering Hong Kong after immigration officials rejected his visa, a move many saw as retribution for his hosting of an event with independence activist Andy Chan. The month before, the Hong Kong government banned Chan’s separatist political party, claiming the move was “necessary” for national security. 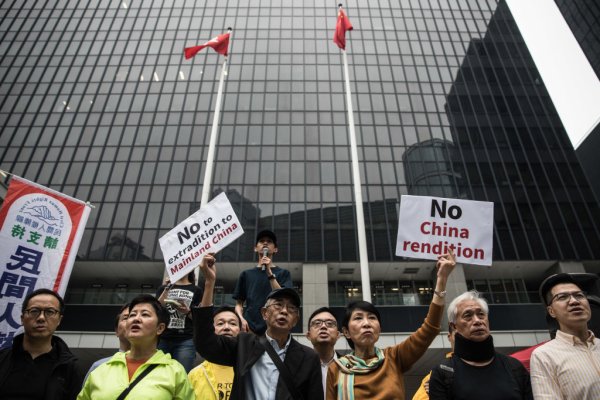