Virginia Hall Was America’s Most Successful Female WWII Spy. But She Was Almost Kept From Serving

When Gina Haspel became the first female director of the CIA in 2018, she talked of how she had stood “on the shoulders of heroines who never sought public acclaim.” She was “deeply indebted,” she said, to women who had served the agency and its wartime predecessor the Office of Strategic Services (OSS) for making her appointment possible by challenging stereotypes and breaking down barriers. Perhaps no woman is a better illustration of that history than Virginia Hall, a one-legged socialite from Baltimore whom the CIA Museum would later hail as the office’s most successful American female spy of the Second World War.

Despite her record behind enemy lines in wartime France, it nevertheless took Hall years to land the post-war job she longed for at the heart of the CIA. It has only been comparatively recently that the agency has publicly acknowledged her as an unqualified war heroine and a devoted officer, giving her a citation in the CIA Museum catalogue on the OSS. It has also now named a training building after her. Yet she has remained little known outside intelligence circles and her agency career suffered from prejudice and misunderstanding until she retired in 1966.

Born to a wealthy banking family in 1906, Hall lost her left leg after a hunting accident at the age of 27 and thereafter was dependent on a wooden prosthetic she named Cuthbert. Despite her raft of languages and extensive knowledge of Europe her dreams of becoming an ambassador had been repeatedly thwarted by State Department prejudice against women — only six out of 1500 staffers in the Foreign Service at that time were female and one of her several attempts to join them was hampered when her exam papers were mysteriously mislaid — as well as the disabled. Even President Franklin Roosevelt, although himself reliant on a wheelchair, rejected lobbying from powerful family friends to overturn a bar on amputees from joining the diplomatic service.

So, as war loomed in 1939, she resigned in disgust from her clerk role at the American legation in the Baltic state of Estonia to embark on what would become a Homeric tale of adventure, action and seemingly unfathomable courage. Long before the U.S. joined the war after Pearl Harbor, she volunteered to drive ambulances for the French army on the front line during the bloody Nazi invasion of May 1940, persevering in picking up the wounded even when fighter planes swept over to pepper the roads with machine gun fire. Yet this was merely an apprenticeship.

When Hall was demobilized after France capitulated, she decided to travel to London to offer her services to the British war effort. On her journey, she was spotted in a Spanish railway station by an undercover agent who in a brief conversation with her quickly realized that here was a woman of exceptional resolve and burning desire to free France from Hitler’s tyranny. He put her in touch with a “friend” in Britain, a senior officer in Special Operations Executive (SOE), the new secret service set up by Winston Churchill to “set Europe ablaze” through an unprecedented onslaught of spying, subversion and sabotage.

SOE top brass were not keen on employing women, especially foreign ones, and were specifically barred from sending them into enemy territory. Yet after six months of trying, they had failed to infiltrate a single agent into France to embark on what Churchill branded a most “ungentlemanly” new form of undercover warfare. The search for rule-breaking recruits of “absolute secrecy,” “fanatical enthusiasm” and unimaginable courage was proving unsurprisingly difficult. Few were willing to take the estimated 50-50 chance of survival against the ruthless barbarism of the Third Reich. When Hall once again volunteered, her obvious qualities saw the old prejudices being abandoned. She was one of the first SOE officers to be dispatched from London and became, in the words of an official British government report at the end of the war, “amazingly successful.”

Even then she was patronized and underestimated until she proved herself capable of eluding the Gestapo longer than any of her male Allied colleagues and particularly adept at recruiting and organizing useful assets in the nucleus of what would become the Resistance armies of the future. She also masterminded spectacular jailbreaks for fellow agents who had been captured. For a whole year, she was SOE’s only Allied female agent in France but after 12 months of marveling at her derring-do, the service decided to dispatch more women into the field. This “gallant lady,” her SOE commanders concluded, was almost single-handedly changing minds about the role of women in combat.

When she later switched to SOE’s American counterpart, OSS, she once again had to break out of her subordinate role by stealth and simply by being better than anyone else. Even the notion of dispatching a woman on a paramilitary operation was still controversial in the U.S., let alone giving her command. So she was deployed as the mere assistant and wireless operator to an older — but inexperienced — male officer. She soon branched out on her own, leaving him flailing in her absence. Once shot of him, Hall quickly emerged as a fearless guerrilla leader who helped liberate whole swathes of France by arming, organizing and sometimes commanding Resistance units when blowing up bridges and attacking German convoys. Hall was rewarded by becoming the only civilian woman of the war to be decorated with the Distinguished Service Cross for “extraordinary heroism.” CIA officers have said that the techniques she developed 80 years ago to build up the French Resistance still inform the agency’s missions today, including Operation Jawbreaker in Afghanistan before and after 9/11.

The extreme exigencies of war had finally given Hall the chance to show what she could do; the return of peace saw the return of the old barriers. Internal personnel papers and the recollections of fellow agents reveal how she was sidelined, undermined and belittled by some of her superiors at the CIA – with her supporters saddened by her “reduced status” and angered by the fact that her track record was viewed as an “embarrassment” by the agency’s “noncombat types.” Hall never received the recognition she deserved during her lifetime, but since then her formidable legacy has gradually become better understood. And as Gina Haspel made clear, her formidable legacy lives on. 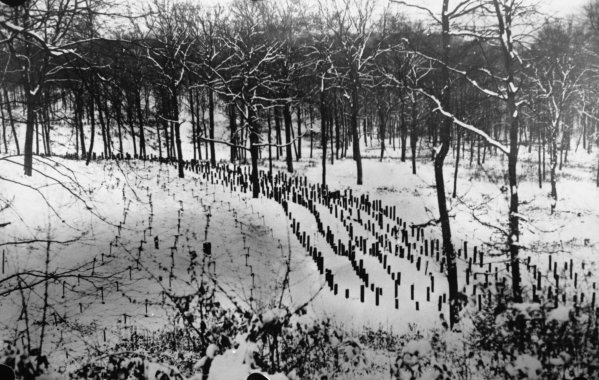 What One German Diary Reveals About Hitler's Attempt to Protect His Country With a Wall
Next Up: Editor's Pick