Ty Jerome #11 of the Virginia Cavaliers reacts in the second half against the Auburn Tigers during the 2019 NCAA Final Four semifinal at U.S. Bank Stadium on April 6, 2019 in Minneapolis, Minnesota.
Streeter Lecka—Getty Images
By Sean Gregory / Minneapolis

The number of people who’ve failed the Ty Jerome “eye test” could fill an arena or three. Take one quick glance at Jerome, the 6’5″ Virginia point guard, and you might not think he’s one game away from a potential national championship, and a reasonable bet to win the Most Outstanding Player award at the Final Four. Jerome’s not dunking on anyone, not overwhelming opponents with his physicality, not blowing by everyone on the court with his blazing speed. “Not athletic,” says Jerome in Minneapolis, where Virginia will play Texas Tech on Monday night in the national championship game. He’s listing reasons, with a slight grin, on why he’s failed the so-called “eye-test” so many times. “Not long. Doesn’t look strong.” He’s been listening to this stuff his whole life. And while other players may underestimate his ability, he’ll happily keep kicking their ass.

“He’s the kind of guy who will rip your heart out,” says Virginia radio announcer Dave Koehn, “and smile while doing it.”

Just ask Auburn. Jerome filled the box score against the Tigers in Saturday’s first national semifinal, scoring 21 points, grabbing 9 rebounds and dishing out 6 assists. When he had to leave the game with four-and-a-half minutes left after picking up a silly fourth foul, Virginia couldn’t subsist without him. Auburn began cutting into the Cavaliers’ nine-point advantage, and eventually took the lead before Virginia won the game on a mini-miracle: shooting guard Kyle Guy was fouled, barely, on a last-second three-point shot. He made all three free throws, giving Virginia a 63-62 win.

And while the refs may have missed a Jerome double dribble in the waning seconds — a turnover would have essentially clinched the game for the Tigers — Jerome points out that an Auburn player grabbed his shirt on the play. To Jerome, the violations cancelled each other out. “I knew they weren’t going to call a double dribble after they let that one go right in front of them,” he says.

Jerome unveiled his entire arsenal against Auburn. Deep threes at opportune moments. Little leaners that had no business going in the basket. Jerome stops, and starts, and stops, and starts, calling to mind the inferior athlete who’ll eventually score on you, since he tests your patience and wears you down. When asked to describe Jerome’s game, Virginia associate head coach Jason Williford offers up “Herky-jerky. Old man. YMCAish.”

Almost from the time Jerome arrived home from the hospital to a basketball in his crib — his father, Mark Jerome, put it there -— he’s heard the doubters. “Guard him!” his mom, Melanie Walker, remembers other parents shouting at youth basketball tournaments in the New York City area, where Jerome grew up. “He can’t go past you! He’s not fast enough!” (“As Mark can attest,” Melanie says. “I got in a couple of fights.”) Mark, who played college basketball at Lafayette — Melanie played at Brandeis — doubled as Jerome’s AAU coach, and was tough on his son. He said some things to young Ty he regretted, and would rather not repeat. “Often times I’d look in front of the mirror and say how could I have done that?” says Mark. “How would I have treated him that way?”

Read more: Why Telling the NCAA to Pay Players Is the Wrong Way to Help College Athletes

Still, Ty remained utterly committed to basketball. His parents couldn’t get him out of the gym. The problem: he was small and skinny.

“He entered his freshman year of high school about 5’10” with no signs of puberty,” says Melanie. “Not a single hair under his arms.” After his first year at Iona Prep in New Rochelle, N.Y., a doctor told Ty he still had some growing to do. His eyes lit up. “How much?”Ty asked. About another inch.

Fortunately for Jerome and Virginia, that prediction stunk. He sprouted up about a half-foot in high school. Virginia coach Tony Bennett kept seeing Jerome on the summer hoops circuit (while scouting other higher-rated prospects, naturally). But Bennett couldn’t get Jerome out of his head. So he recruited Jerome, who committed to Virginia before his junior year at Iona. Still, the questions wouldn’t stop. Could Jerome do the things he did in high school — take over games, throw magical passes — at the college level, lest at Virginia and in the ACC, where he’d be facing the likes of Duke and North Carolina? Koehn, the Virginia radio announcer, recalls a mid-major college head coach telling him that Jerome would have thrived at his school, but he’d struggle at Virginia.

“That stuff would bring a lot of kids down,” says Vic Quirolo, Jerome’s high school coach. “But it seemed to energize him.”

Once he got to Virginia, Jerome hit the weight room hard with strength coach Mike Curtis. “He’s not the most genetically gifted athlete in college basketball,” says Curtis. “But he’s phenomenal at doing the little things that can level the playing field for him.” Virginia tracks things it calls KPIs — Key Performance Indicators. When it comes to things like sleep, hydration, and nutrition, Jerome hits the marks.

His defense has improved under Bennett, one of the most demanding defensive coaches in the country. Jerome also got better at shooting on the move. So now, one year removed from Virginia’s historic loss to UMBC —- the top-seeded Cavaliers became the only school in NCAA tournament history to lose to a No. 16 seed — Virginia sits one game away from a national championship, with its point guard a potential first round NBA draft pick.

Bennett calls that loss a “painful gift,” and it’s clear that Jerome takes the negativity personally. On Sunday, his emotions almost boiled over as he cited a news article from the UMBC aftermath that demeaned the program.

“All the outside noise has made us so much stronger, so much more unified, and brought us together,” says Jerome. Making fools of the doubters has defined Jerome’s entire basketball life. Why not a national title to top it all off? 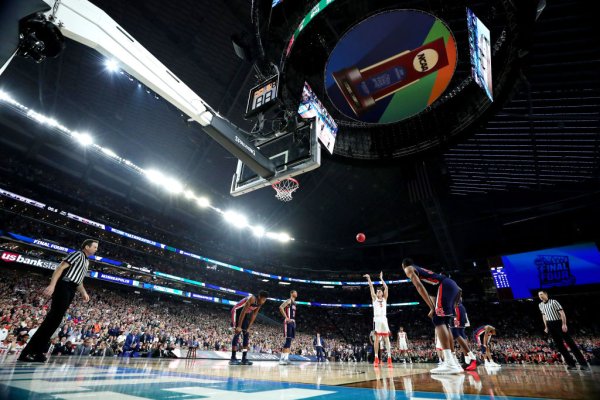 A Foul Controversy for Virginia, Auburn's Final Four
Next Up: Editor's Pick