An Encounter With Sheer Heartbreak at the Virginia, Auburn Final Four Game

Kyle Guy #5 of the Virginia Cavaliers shoots a free throw late in the second half against the Auburn Tigers during the 2019 NCAA Final Four semifinal at U.S. Bank Stadium on April 6, 2019 in Minneapolis, Minnesota.
Streeter Lecka—Getty Images
By Sean Gregory/Minneapolis

About a half hour after Virginia defeated Auburn, 63-62, at the Final Four in Minneapolis, eyes in the Auburn locker room were predictably red. When someone stomps all over your heart, tears will follow.

Junior guard Will Macoy, a reserve for the Tigers, stared blankly ahead, as if he were preparing for a funeral. Assistant Coach Steven Pearl started tearing up, while singing the praises of one of his players. Uneaten fruit bowls and peanut butter and jelly sandwiches sat on a table. Given the pit in Auburn’s stomach, who was going to bother?

With about a second left in the game, and Auburn up 62-60, Virginia’s Kyle Guy leapt in the left corner, and launched a three-pointer to win the game. Auburn’s Samir Doughty lurked nearby, and did… what, exactly? When Guy was airborne, Doughty, holding his arms straight up in the air, made slight contact with Guy. He missed the shot. When Doughty heard a whistle, he had just one thought:

Millions agreed with him. James Breeding, the man with the whistle, did not. In what will go down as one of the most controversial calls in college basketball history, Breeding awarded Guy three fouls shots, with .6 seconds left in the game. Guy channelled all his coolness, and made all three, giving Virginia the 63-62 advantage. Auburn’s final heave fell well short.

In the dejected locker room, Doughty refused to rip the officials, at least until he could look at a replay. I offered to show it to him on my cell phone; he politely declined.

“They ref in the Final Four because they do a great job,” says Doughty, who has the Phillies logo and 215 area code tattooed on his left shoulder — he’s from Philadelphia. “Lion Hearted,” reads his chest tattoo. “They’re going to try to the best of their ability to make the right call. So I can’t question that.” Breeding ruled that Doughty took away Guy’s landing spot, a violation of Rule 4, Section 39.i, according to NCAA National Coordinator of Officials J.D. Collins.

Rarely, however, are such non-blatant infractions whistled at the end of games.

“I just don’t think the game should be decided like that,” says Auburn’s Bryce Brown, whose hot shooting allowed Auburn to erase a 10-point deficit with 5:22 left. After Guy missed the shot, Auburn’s bench and fans — thinking the game ended — started celebrating.

“We thought we won it,” says Auburn senior forward Horace Spencer. “I didn’t see the ref call the foul. I didn’t understand what was happening. So they walked over to the bench and said something to us. We were about to storm the court as we were like ‘Damn. That’s it. For real.’ They’re going to make all three of these and we’ll have 0.6 seconds. You can’t win like that.”

Auburn fans filled the cavernous U.S. Bank Stadium, home of the Minnesota Vikings, with boos. According to the Associated Press, polices escorted some members of Auburn’s student section out of the stadium. Doughty discourages any fans from threatening the ref, on social media or elsewhere.

“Definitely we don’t want to go that route,” says Doughty. “It’s a cold world out there, people will do stuff like that.”

Doughty said he’s not going to hide from the heartbreaker: he planned on watching a replay of the foul call back at his hotel. “You did not touch him!” his mom said on a FaceTime call. “She’s on my side,” he says, smiling slightly. Doughty asked me if I thought Breeding made the right call. Be honest, he implored. I told him I thought it was a foul, and felt like a jerk.

He didn’t mind though: Doughty again sympathized with Breeding. He insisted that Breeding thought he was doing the right thing, and Auburn would just have to live with it. Doughty then joined four teammates around a smartphone, to watched another replay. Before Guy got his shot off, Virginia’s Ty Jerome appeared to double dribble with a few seconds left. A turnover there would have effectively given Auburn the game. “He did double dribble!” said Spencer. “Oh my God!”

Another body blow for Auburn, before heading home. 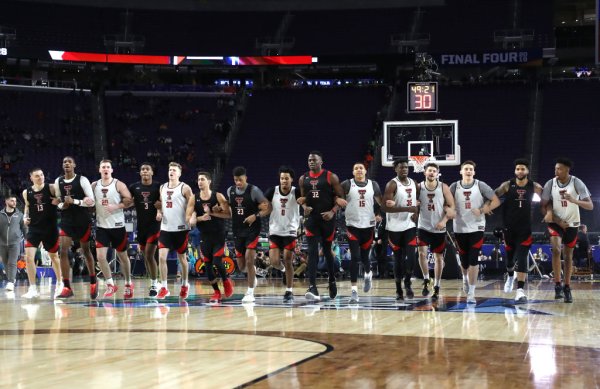 This College Basketball Team Banned Smartphones. Now It's in the Final Four
Next Up: Editor's Pick