Syrians, In Their Own Words

When the short film “Of God and Dogs” took the Short Film Grand Jury prize at the Sundance Film Festival in January, no one should have been surprised. A powerful piece that explores murder, guilt and an unusual quest for redemption, it was the kind of film that that seemed destined for critical acclaim. But the filmmakers weren’t some budding auteurs fresh out of film school. “Of God and Dogs” was produced by the Abounaddara Collective, a group of Syrian social activists and documentary makers based in Damascus who decided to combat the standard media narratives about the conflict in the country with intimate portraits of anonymous citizens—both inside Syria and in exile. The short films, ranging in length from 26 seconds to 12 minutes, address themes as varied as a woman’s reasons for taking off the veil to the confession of a young Free Syrian Army soldier who killed a man he knew to be innocent—the subject of “Of Gods and Dogs.” New videos are posted every Friday on Vimeo.

Abounaddara is the Arabic nickname for a man with glasses, a reference that reflects the peculiar take on the world when it is seen through the eyes of filmmakers more interested, according to the collective’s manifesto, in “stories of everyday life [rather] than in grand narratives.” Though the content isn’t overtly political, members of the collective prefer to remain anonymous, a stance that has its roots in the pre-war days when the artistic freedom of Abounaddara’s filmmakers was at risk of being curtailed by government censorship. Founded four years ago, most of the collective’s pieces are posted online only. The subjects are unnamed, as is the location of filming. Most take place in Syria, or among Syrian refugees in neighboring countries.

Some of the collective’s early, pre-war pieces are elegantly produced portraits of Damascus’ artisans and laborers, a celebration of an art and culture that is likely to be forever stolen by a conflict that has seen so much destroyed. Each is cleverly titled. The “Smiters For Damascus,” about the ancient craft of brass hammering, warns in a subtitle, “Enemies, take flight! The Damasceneurs are striking back.”

The Smiters for Damascus from abounaddara on Vimeo.

Another piece, ostensibly about a traditional fabric painter in an old Syrian souk, captures a spirited exchange in which a potential client asks for a widows’ discount. The fabric painter tartly responds that he is a widower too, at which point the widow’s daughter weighs in with the offer of her mother in marriage, as a way to score a cheaper price. Like all the other pieces by the collective, there is no narration. The subjects reveal their characters through their own voices, and invite the viewer to join in their laughter as the mix of commerce and marriage proposals takes an uproarious turn.

The Stamp Man’s Last Stand from abounaddara on Vimeo.

But art, no matter how much it attempts to eschew politics, cannot stand apart from the kind of violence and destruction that has rocked Syria over the past three years. More recent pieces reflect the country’s new reality, even as the short films attempt to break free from the shadow of the war. In “Snapshots From History In the Making,” a Syrian protestor is caught in the middle of an existential crisis by an aerial bomb attack in his neighborhood. He doesn’t even flinch as a round of detonations shake the pink walls of his room. “It won’t be long,” he says matter-of-factly. “The plane will pause, then it will come back for a second raid.”

The short films are by turns poetic, poignant, inspiring or, in the case of a 26-second video in which the camera hovers over the shrouded corpse of a child who starved to death in a besieged part of Yarmouk, depressing. Some are all of those things at once. “Death is so ubiquitous that we cling to life even more,” says a middle-age exile in the 3-minute soliloquy that makes up “Confessions of a Woman.” She admits to the shame of living in a borrowed apartment even as she speaks of recently falling in love—for the first time. “Now I tell myself, I’m sorry that I didn’t do it sooner.”

Even though the collective’s work shies away from overtly partisan statements, a theme of fierce independence and a love for Syria’s multi-sectarian fabric shines through, particularly in pieces poking fun at Islamist rebels who would remake Syria in their own image. “The Islamic State for Dummies” allows one such fundamentalist to hang by his own noose as he struggles to explain why establishing an Islamic state in Syria does not mean taking the country back 1,400 years. “Whoever opposes cutting a thief’s hand,” he says, defending Islamic law, “It means that you are a thief or want to steal without accountability.”

Another thought-provoking piece, titled “Marcell,” allows the pro-rebel female protagonist to justify her decision to stop wearing a veil the moment Islamist rebels in her town started demanding it. “I will not yield,” she declares, her thick hair tumbling in curls around her shoulders. “Do we want to leave the fate of our children up to the military?” she asks, referring to Islamist militants. “If so, we might as well do it now, by reconciling with the regime.”

While some of the documentaries are clearly well produced affairs complete with music and deft editing, most are uncut and unrehearsed. They are delivered straight to camera, visible evidence of the preoccupations of a people determined not to be defined by war, but to live in spite of it. “War or no war, we’re still hip, right?” a beautician and teacher asks her class as she demonstrates how to craft an elegant wedding updo in a darkened bunker. 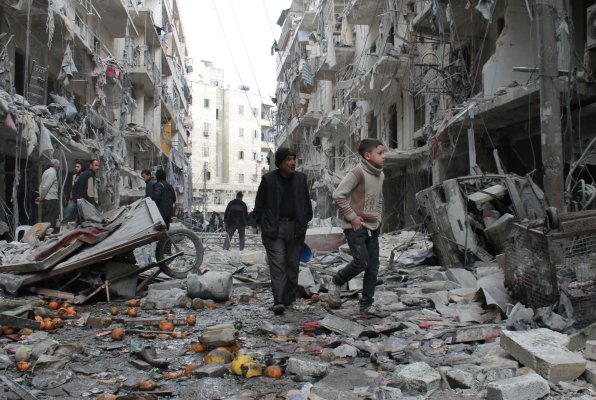 Syria’s Economy Will Take at Least 30 Years to Recover
Next Up: Editor's Pick