U.S. President Donald Trump talks to reporters before meeting with Chinese Vice Premier Liu He in the Oval Office at the White House April 04, 2019 in Washington, DC.
Chip Somodevilla— Images
By Mahita Gajanan

President Donald Trump said criticism from the late First Lady Barbara Bush in her new biography did not surprise him.

“I have heard she was nasty to me, but she should be,” Trump said in an interview the Washington Times. “Look what I did to her sons.”

The book, The Matriarch: Barbara Bush and the Making of a Dynasty, which was released April 2, details Bush’s long dislike for Trump that dates back to the 1990s. Bush, who died last April at the age of 92, wrote in a diary entry from 1990, “Trump now means Greed, selfishness and ugly. So sad.”

Bush’s disdain for Trump was revived when he mocked her son, Jeb Bush, as they squared off over the 2016 Republican presidential nomination. Jeb was considered a potential frontrunner for the 2016 Republican nomination, but his campaign fell flat. Trump belittled him as “low energy Jeb.” Trump also criticized former President George W. Bush for the Iraq and Afghanistan wars.

According to the book, written by USA Today‘s Susan Page, Barbara Bush was so incensed by Trump’s actions during the 2016 election that she blamed him for what she called a “heart attack.” By the end of her life, she said she no longer considered herself a Republican.

Trump said he understood Bush’s anger toward him.

“Look, she’s the mother of somebody that I competed against,” he said. “Most people thought he [Jeb Bush] was going to win and he was quickly out.” 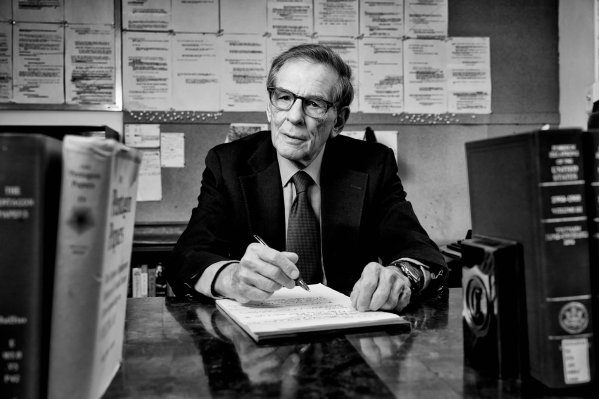 Biographer Robert Caro Pauses as He Prepares His Final Lyndon B. Johnson Volume
Next Up: Editor's Pick