Democratic strategists see two paths to victory in 2020: winning back Midwestern states like Wisconsin and Michigan that narrowly went for Trump in 2016 or southern states with changing demographics such as Georgia and Texas.

You can put Tim Ryan firmly in the former camp.

The eight-term Congressman, who launched his presidential campaign Thursday on social media and on the talk show “The View,” represents the former industrial hub of Youngstown, Ohio, and he made clear that will be his primary selling point.

In tone and in substance, Ryan laid down a marker that he is going to focus on the white, working-class voters who may hold the keys to the White House. The announcement video goes so far as to show Ryan having a beer in a bar and talking with unionized brick-layers.

Ryan has been a long-time critic of his party’s leftward shift, going so far as to unsuccessfully challenge Nancy Pelosi’s post leading House Democrats. He has cautioned for years that the party has been cast as one for costal elites and ignorant of challenges facing voters in the vast middle of the country. And he has made clear that he thinks Democrats are missing opportunities with centrist voters by focusing on policies like abolishing ICE or creating job guarantees.

That appeal to working-class voters is why Sen. Sherrod Brown of Ohio so carefully considered — and then decided against — running himself, and why many Democrats are eagerly awaiting word from former Vice President Joe Biden, who has a long track record of reaching those voters.

Others, however, are eyeing an alternative path to the needed 270 votes in the Electoral College that runs through growing, diversifying and trending-blue states in the South and Southeast. In effect, it’s a battle between the Rust Belt and the Sun Belt.

Both camps make compelling cases rooted in data and intuition. Some Democrats think the industrial Midwest is sliding into Republican arms. Places like Ohio, Michigan and Wisconsin backed Barack Obama in 2008 and 2012 and then tipped to Trump in 2016. Those three states bring 44 electoral votes — about one-sixth of the votes needed. Add in there wins in Iowa, Indiana and Minnesota — all states where Obama prevailed in 2008 — and the pot grows to more than a quarter of what’s required. (Illinois is reliably Democratic, having last backed for a Republican presidential nominee in 1988.)

Democrats like Ryan think the party instead needs to re-center on what had been the so-called Blue Wall, the 18 states they won in six consecutive presidential elections from 1992 to 2012. All together, those states provided 248 electoral votes. But the wall cracked in 2016, when Trump narrowly prevailed by carrying Michigan, Wisconsin and Pennsylvania by a combined 80,000 votes.

Those Midwestern states have become trickier for Democrats, especially in presidential years when voters are paying close attention. In Ohio alone, for instance, a net 750,000 jobs disappeared between 1969 and 2009 as the manufacturing and industrial sectors collapsed.

Some Democrats see opportunity in that dour reality. Despite Trump’s claims that steel jobs are coming back to the United States, twice as many Ohioans now work at Wal-Mart than in steel or iron industries, according to an analysis from Ohio State University’s John Glenn College of Public Affairs and the Carnegie Endowment for International Peace.

“A lot of people have been left behind, and these are the people who built the country,” Ryan says in his video. “They aren’t asking for liberal solutions or conservative solutions, they’re asking for real-world solutions to their real-world problems.”

Those white, working-class voters pivoted to Trump in an unexpected way. Ryan’s home district of Mahoning County barely stayed blue; Clinton won it with less than 50% of the vote. Next door, Trumbull County went red for the first time since 1972 when voters there decided they wanted “Nixon Now, More Than Ever.”

The mayor of Warren, Ohio, the county seat of Trumbull County, attributed the shift to uneasiness about “more-of-the-same” politics. “I don’t think it was a one-time fluke,” Doug Franklin said of the 2016 results. “I think it was seething or existing beneath the surface of our politics.”

At the same time, a buzz is building under the surface that changing demographics could make the Sun Belt the new battleground.

In Georgia, Stacey Abrams came within 2 percentage points of winning the governor’s mansion. The state had Democratic governors from 1872 until 2013, but last backed a Democrat for president in 1992. Democrats say they are committed to sending cash into the state to boost its odds of tipping blue.

The same is true in Texas, where Beto O’Rourke came within 3 percentage points of defeating Sen. Ted Cruz’s re-election bid. Democrats are bullish that the state’s 38 electoral votes could be in play with a candidate who can make inroads in a state that last backed a Democratic presidential nominee in 1976. But they have reasons to be optimistic. For instance, Hispanic turnout in 2018 in Dallas County was up by 86 percentage points over 2014 levels.

And there are dull glimmers of potential in Alabama, where African-American women powered Doug Jones to a Senate seat in a special election, and maybe even in Arizona, where Democrat Kyrsten Sinema captured her seat in the Senate. Taken as a bloc, Georgia, Texas, Alabama and Arizona offer 74 electoral votes, or more than a quarter of what’s needed to win, and seem primed to reward candidates who embrace a more progressive platform.

For now, Democratic candidates haven’t settled on either strategy, but it’s easy to spot some early leanings.

California Sen. Kamala Harris rolled out her education plan in Houston, signaling she was not going to cede ground to Texans O’Rourke and former Housing and Urban Development Secretary Julian Castro. Massachusetts Sen. Elizabeth Warren recently made a swing through Alabama, Mississippi and Tennessee. And as New Jersey Sen. Cory Booker prepared to launch his race, he made a swing through Georgia to meet with Abrams, his law school classmate.

For his part, Ryan sees the wisdom of a Midwest strategy rooted in pragmatic progressivism and Democrats’ unrelenting desire to defeat Trump. While Ryan has pivoted from being a member of the National Rifle Association and opposing abortion rights earlier in his career, he is banking his potential in booting Trump from the White House will be more important that deviations from what is now party orthodoxy.

“I’m just going to be myself. I’m going to be for the things I’ve always been for and I think most progressives are going to see that as a candidate that can not only advance a progressive agenda but also win,” Ryan said. “I can win western P.A. I can win Ohio. I can win Michigan. I can win Wisconsin. And that means Donald Trump is going back to Mar-a-Lago full-time.”

Ryan plans a rally in his northeastern Ohio congressional district for Saturday, where he will speak by the doors of the Youngstown Business Incubator, a driver of economic innovation in the former steel town. Local union leaders, long-time Ryan allies, are already building a crowd for his launch. After that, he is heading on Sunday back to Iowa, where he visited last weekend.

But Ryan has plenty of work ahead of him. CNN, the Des Moines Register and the University of New Hampshire all excluded Ryan in their most recent surveys. He lacks a serious fundraising machine at present. And he faces very real hurdles in qualifying for the first debates, which start in June.

For all of his talk about being a strong general election candidate, he’ll have to get the nomination first. 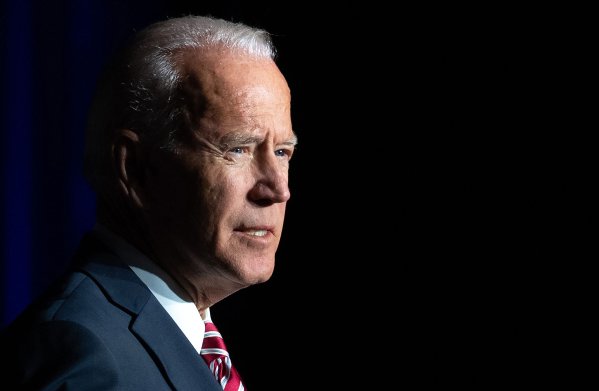 I Worked With Joe Biden. Here’s What to Know About the Frontrunner Myth Growing Around Him
Next Up: Editor's Pick