Internally displaced persons wait for supplies at the Picoco refugee camp in Beira, on April 1, 2019.
Guillem Sartorio—AFP/Getty Images
Ideas
By Mo Ibrahim
Ibrahim is founder and chair of the Mo Ibrahim Foundation. The Ibrahim Governance Weekend is the foundation's flagship annual event; in 2019, it is in Abidjan, Côte d’Ivoire, on April 5–7.

The story of migration from Africa is typically told as a mass exodus from conflict or climate change. Images of vulnerable families crossing oceans on precarious boats and enduring winters in makeshift refugee camps have become ingrained parts of this narrative. There are human lives behind each image, and their experiences must never be dismissed. But this is not the full picture. The reality of this phenomenon and its root causes are very different. The story of African migrations needs to be reset.

This is not just an African concern: we must urgently push back against the corrosive global discourse that has perpetuated a distorted and harmful picture that betrays the reality. Because without a doubt, distorted narratives lead to distorted policies.

Despite popular belief, in almost 30 years, the scale of the global migrant population has increased only marginally, from 2.9% of the global population in 1990 to 3.4% in 2017. Migration patterns may have changed, but they have not significantly increased.

Yet migration evokes strong emotions: it gets tangled up with suspicion of difference, hostility to anyone outside the “we” group. In an age of fake news and deliberate misinformation, migration is perhaps most susceptible to this distortion. In recent years, we’ve seen the issue exploited for political ends across the globe.

We can do better than this. Migration is not an inherently negative phenomenon. For centuries, migration has fostered global trade links, shaped nations, fueled human endeavors and enabled skills and cultures to be shared across the globe. As world leaders recognized in the first-ever United Nations Global Compact on Migration in December 2018, migration, “is a source of prosperity, innovation and sustainable development in our globalized world.”

Data shows that migrants support GDP growth in destination countries and are valuable, often indispensable parts of the workforce. Their economic contribution is considerable. Migrants’ contribution to GDP is estimated at 19% in Côte d’Ivoire, 13% in Rwanda and 9% in South Africa.

Migration can invigorate growth, plug labor market gaps and offer constructive opportunities for energetic and growing youth populations. Today, 60% of Africa’s population is under the age of 25 and by 2100, Africa’s youth could be equivalent to twice Europe’s entire population. However, the match between education and the skills needed by employers is worse than in any other world region. Technological progress in recent years has created new jobs and business models, but opportunities for young African’s to master this innovation are still lacking across the continent.

This is a huge challenge we must take on. If we do not manage and foster mobility, we run the risk of losing our greatest asset: our young people.

Refusal to create legal migration routes, insufficient policies and weak mobility frameworks mean criminal networks often profit from migration more than governments. When migration is poorly managed, we all lose out. In 2016, illegal smuggling generated $7 billion in income, equivalent to the amount spent by the United States or European Union countries on global humanitarian aid in the same year. These are sobering numbers.

Humanity has always been on the move. Migrations are the fabric of our shared existence and have strengthened continents, countries and communities for millennia. Supporting migration, rather than thwarting it, is essential if we wish to meet the 2030 Sustainable Development Goals and end poverty.

The political challenge for Africa — and, indeed, the world — is to incentivize migration in the right way, be it geographical, educational or professional.

The African Union’s recent protocol on free movement, adopted a year ago, is a key step. This commitment to removing some of the barriers to migration will allow employers to recruit the skills they need, supporting economic development across Africa. But in Africa as elsewhere, the popular political will needs to press ahead. Attitudes in Africa towards migration are more positive than anywhere else in the world. African citizens are ready.

Movement within and across continents is one of the great drivers of human history. Economic uplift is not a zero-sum game — in which one country’s loss is another’s gain. Progress cannot be achieved by trapping ambitious young people in jobless markets. The answer must be not to forbid migration but to better manage it — and to overturn the corrosive global discourse on migration in the process. 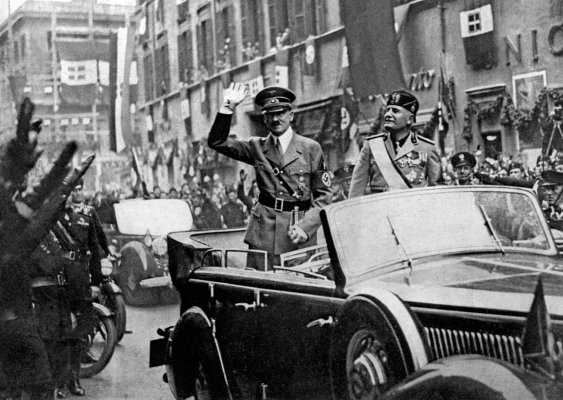 What to Know About the Origins of Fascism’s Brutal Ideology
Next Up: Editor's Pick