politicsDid America Have a 'Good Relationship' with Hitler? What Joe Biden Got Right and Wrong About That History During the Debate

SportsThis Year's World Series Isn't the First Played During a Pandemic. Here's What Happened to Baseball in 1918

The Best Game of Thrones Fashion Moments of All Time

Game of Thrones may be a tale of fire and ice, but it's also a tale that's served some serious looks over the course of its soon-to-be eight seasons. From the heavy winter furs sported by Jon Snow and the Starks in the North to the ethereal dresses (and later, Dothraki warrior leather ensembles) favored by Daenerys Targaryen, there was fashion to be found in all the Seven Kingdoms.

While many of the style choices were practical, especially when it came to region (one would hardly wear a fur while living in Dorn) or occasion, clothing was also a strong way to show the evolution of a character and their relationship to power and the Iron Throne — Cersei's cropped hair and black leather gowns after taking the throne as the Queen of the Andals and the First Men might be the most prescient example of this.

From suits of armor to winter furs, ahead of the premiere episode of the final season of Game of Thrones, here's a look back at the 10 best fashion moments from Westeros.

Out of all those vying for the Iron Throne in Westeros, Daenerys is the uncontested clotheshorse. On any given day, you might see Dany in Essos silks, Dothraki leather warrior wear or even her birthday suit for the casual day when you want to burn down a temple to prove you are the one true leader! However, out of all of Daeny's very good looks, her gorgeous white fur dress coat she wears when she goes to wage war beyond the wall with Jon Snow is definitely the most striking. Here, clearly, Daenerys is out of her element both symbolically and literally, and yet she still manages to hold court as the best-dressed in the land. That's worth a bend the knee!

Cersei's entire existence has been a pursuit of power, a power that she's always been adjacent to until she becomes the Queen of the Andals and the First Men, a role she clearly relishes and is reflected in her new garb for the role. As queen, Cersei continues to wear her hair cropped. Fans will remember that she had her hair shorn for her walk of shame, but its continued short state appears to be a clear decision to keep it that way on Cersei's part), giving her an uncanny resemblance to her two sons, who both assumed the throne before she did.

Of all the characters in the North, Sansa may have experienced the most dramatic transformation, and her wardrobe reflects that. Gone are the days of her gilded dresses and elaborate hairstyles as young girl and soon-to-be queen. Instead, Sansa's strongest look is when she returns to the North and assumes the role of Lady of Winterfell. She wears dark colors, winter furs and silhouettes that clearly communicate not only her power but her pride in her land. The belt she wears as part of this outfit bears resemblance to a military uniform, showing that Sansa is now capable of taking care of herself and her people, not matter what comes her way.

No one wears a crop top quite like Missandei, the freed slave turned advisor to Daenerys. After gaining her freedom, Missandei is frequently spotted around the Bay of Dragons in an array of crop tops, ranging from black leather with a v-neck to a blue material in a crossover style.

Euron Greyjoy is arrogant, cruel and frankly, a little evil. But no one can deny that when it comes to edgy, rockstar style, no one can deliver like the current King of the Iron Islands. Euron's dark, mostly black, mostly leather looks are so cool, they could as easily be worn in a Rick Owens runway show as they could to usurp Theon and Yara's throne.

No one but Ellaria Sand, the fierce lover of Oberyn Martell, and the mother who birthed the even fiercer Sand Snakes, would select a gauzy gown as her outfit of choice to murder a young girl. During her time on Game of Thrones, Ellaria embodied the sensuality of Dorn; she was hardly shy about her love of a plunging neckline, a bikini top worn as a shirt, or some sexy eyeliner, so perhaps it makes sense that she dressed to the nines to kill Myrcella.

Let the record show that the matriarch of House Tyrell not only impressively witty and intelligent, but that she was dexterous when it came to accessorizing! Always regal, Lady Olenna always wore an impeccable wimple and hat that matched whatever outfit she had on for the day. 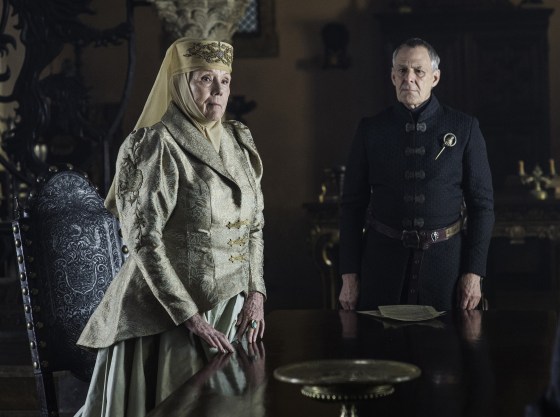 As the bravest warrior in Westeros, Brienne of Tarth is ready to spar at any given moment. As one of the few women in Game of Thrones given margin to oppose gender norms, Brienne's black leather armor is not only functional and protective, but revolutionary.

Jon Snow's uniform as part of the Night Watch makes a strong case for why everyone should wear all-black. Not only does everything match, allowing you more time to focus on what you'd like to accomplish (such as becoming the King of the North!), it's also a sleek and classic look that communicates power without being overbearing. 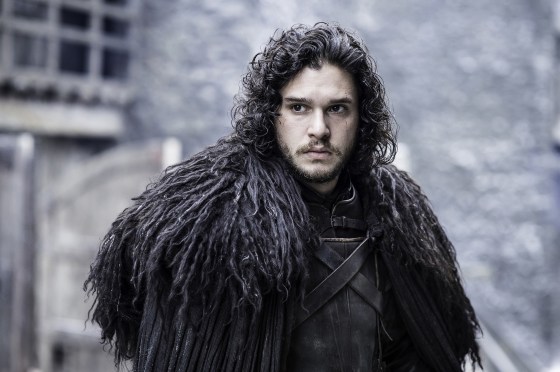 Arya's costume as a commoner in Braavos was a refreshing departure from the minimalist and drab clothing she wore while in the Hall of Faces. Sporting playful braided side buns, a loose blouse and bolero combo and a full skirt, Arya's look was folk chic at its best.