It's Complicated: From the Roman Empire to Brexit, Britain Has Always Struggled to Define Its Relationship With Europe

The EU and UK flags fly during a meeting between British Prime Minister Theresa May and German Chancellor Angela Merkel at the Chancellery in Berlin on April 9, 2019.
Emmanuele Contini—NurPhoto via Getty Images
By Ciara Nugent

Britain today is consumed by its relationship with Europe. Almost three years after 52% of U.K. voters opted to leave the European Union, lawmakers and the public are still struggling to decide what they want their future ties to the bloc to look like, forcing Prime Minister Theresa May to repeatedly ask other E.U. leaders for an extension of the exit date. On April 10, they set a new deadline of October 31. “Please do not waste this time,” European Council president Donald Tusk warned.

Many Brits want a Brexit deal that keeps them close to the E.U., allowing deep trade links, free migration and shared regulations. Others would prefer, if no satisfactory plan emerges, to crash out of the bloc with no deal in place, and instead forge a new national identity outside of Europe. Others still, millions of them, are calling for an new referendum.

But Brexit is far from the first time Britain has questioned whether it really belongs with the continent that surrounds it. For centuries, from the Roman invasion to the joining of the E.U.’s predecessor in 1973, Britain has alternated between moving closer to and pulling away from Europe. TIME spoke to British historian Jeremy Black, a Professor at Exeter University and author of Britain and Europe: A Short History, about five key chapters in the history of that relationship, and what they might reveal about the U.K.’s current existential crisis.

Britain’s first major contact with the continent across the sea came around 55-54 BC, when Julius Caesar arrived and began incorporating much of modern-day England and Wales into the sprawling Roman empire. A century later, in 43 AD, a full-scale invasion followed. From then, for almost 400 years, southern Britain was ruled from Rome. (However, the invaders never managed to tame unruly Scotland, and in 128 AD Emperor Hadrian built at 73-mile coast-to-coast wall on the northwest edge of its territory to keep the northerners out.)

Black says that during this period indigenous pagan religions began to be “amalgamated” with Roman cults, while elites forged cultural ties with Rome. Meanwhile, trade with the rest of the Roman-ruled continent “developed greatly.” Crucially, Roman traders traveling to Europe spread the story of Jesus. Though Christianity remained a marginal faith in Britain for hundreds of years, once it took hold, the religion — and the question of how it should be practiced — would become the defining factor in Britain’s relationship with Europe, tying them together for centuries after the end of Roman rule in around 410 AD.

By the beginning of the 1500s, England had been looking to the Pope for religious authority for almost 1,000 years, ever since church rulers had in the 600s opted to follow the rules and regulations of Roman Catholicism, rather than those preached by Irish monks. The Reformation — “Britain’s greatest-ever break with Europe,” Black says — would change that.

In Western Europe, German monk Martin Luther was speaking out about the corruption and excess he perceived in the Catholic Church. By the mid-1520s, his ideas had sparked fierce debate among academics in England. Some were beginning to see papal authority as an affront to English sovereignty. Around the same time, King Henry VIII had his own grievance with the church: Pope Clement VII had refused to annul his marriage to his first wife, Catherine of Aragon, which he needed in order to marry his mistress, Anne Boleyn. Henry decided to break with Rome and Catholicism, forging ahead with his divorce, founding the Christian Church of England in 1534 and dissolving monasteries across the country.

“The Reformation was highly divisive,” Black says. “Minorities who remained Catholic objected to the Reformation, of course, and Protestants objected to Catholics having, as they saw it, a loyalty to a foreign jurisdiction.”

Black argues that the Reformation debate in some ways resembles the U.K.’s current struggle with Brexit. “During both episodes, people on both sides focus a lot more on identity, emotion [and] a sense of commitment than we see in normal British politics, which is more about compromise,” he says. “These aren’t areas where people seem to find it very easy to compromise.”

War with France and the rise of the British Empire

After the Reformation, Britain — as the country became known in 1707 with the parliamentary unification of England, Wales and Scotland — couldn’t just ignore its European neighbors. That much is clear from the series of wars with France, the Netherlands, Spain, Denmark and others that punctuated Britain’s 17th and 18th Centuries and early 19th Centuries. The bulk of these conflicts were sparked by disagreements over commercial interests or who should control seas and territories. The Seven Years War (1756-63), for example, plunged Britain and a dozen other European countries into war after the Austrian Habsburgs tried to take back a province from Prussia. Later, Britain and France took different sides in the American Revolution (1775-1783), with France making a decisive contribution to the Americans’ victory and incurring heavy debts in the process.

Britain’s continental conflicts in this period ended at the Battle of Waterloo in 1815; the British defeated French Military leader Napoleon Bonaparte, who famously envisaged a proto-E.U., saying in 1805 he wanted to create “a European legal system, a European appeal court, a common currency, the same weights and measures, the same laws.”

Far from Napoleon’s vision of tightening European links, over the next century the continent became less and less important to Britain, Black says, because it had a new overseas priority: the British Empire. Starting in the 15th Century and ramping up in the 18th Century, Britain colonized so many countries and territories that, at its peak in the early 1900s, it covered one quarter of all the land on earth, stretching from Canada to India to Australia.

The wealth and influence generated by the empire, and the time and attention it required to maintain, distracted Brits from events geographically closer to home, Black says. After seeing off Napoleon, the British didn’t send an army to the continent for almost a century, when the First World War broke out in 1914. “During the period of empire, Britain was looking economically, culturally and politically across the oceans,” Black says. “In, say, 1850, when most British people picked up their newspapers, they would know more about what was going on in the United States or in Canada than they did about what was going on in Helsinki or Warsaw, or even places closer in.”

In one sense, the World Wars forced Britain to see itself as part of a wider European community. It was drawn into both World Wars I and II because it had made public promises to protect other European countries (Belgium in 1914 and Poland in 1939) from German aggression, Black points out. But in the latter case, Prime Minister Winston Churchill was keen to stress that Britain’s involvement was about more than Europe.

“This is not a question of fighting for Danzig [Gdansk] or fighting for Poland,” he told Parliament as they debated a declaration of war in 1939. “We are fighting to save the whole world from the pestilence of Nazi tyranny and in defense of all that is sacred to man.”

After the horrors of WWII, which ended in 1945, countries in Western Europe hoped that stronger ties between neighbors could be a way of preventing future wars. So, six of them formed the first of the E.U.’s predecessors. But Black says Britain wasn’t ready to follow them. “There was still view in the late ’40s in Britain that winning the war was an affirmation of what they’ve been doing, how they’ve been organized,” he says. “There wasn’t the same sense of ‘Oh my God, we’ve got to change things’ as there was in Europe.”

British decline and joining the EEC

The two decades after WWII were a tough time for Brits who wanted to see themselves as world leaders. By the 1960s, most of the empire’s former colonies — along with those of other European nations — had become independent countries. And the 1956 Suez Crisis, in which the U.S. refused to support Anglo-French attempts to retake the Suez canal after the Egyptian government nationalized it, left the U.K. feeling abandoned by its most powerful ally.

The desire to reclaim lost influence, Black says, drove British Prime Minister Harold Macmillan to finally apply for the U.K. to join what was by then called the European Economic Community, which it finally did in 1973. “They saw it as a potential way to regain their status as a world power,” he says.

Reporting on an 11-day “Fanfare for Europe” event organized by the government to celebrate the U.K.’s entrance into the bloc, TIME noted that “most Britons were more inclined to view the event with resignation, opposition or, like TV comedian Benny Hill, as an occasion for satire […] English housewives worry that their food prices will skyrocket to Common Market levels.”

While Britain’s enthusiasm for the E.U. seemed to have grown by 1975, when 67% of voters in a referendum opted to remain in the bloc, the country never adopted the shared currency, the euro, which was put into use by 11 member states in 1999. Nor did it joined the Schengen agreements, which abolished border controls and allows people to move freely across 25 states. British politicians have long resisted further integration with Europe — most famously, in Margaret Thatcher’s 1990 response to calls for more centralized control of Europe: “No, no, no.”

“Britain has always viewed itself as a semi-detached member of the E.U,” Black says, citing both the British Isles’ geographical separation and the “outward looking” legacy of imperial ties to countries like the U.S. and Australia as reasons for that mindset.

That semi-detachment may be about to become a lot more pronounced. But however Brexit ends, history suggests it won’t be the end of Britain’s tussle with its European identity. 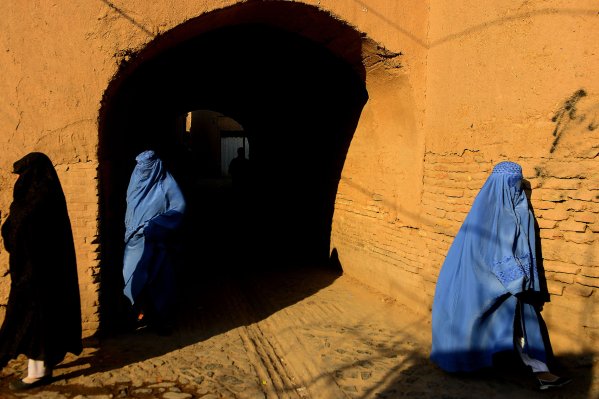 Angelina Jolie: Why Women Are the Key to Lasting Peace in Afghanistan
Next Up: Editor's Pick