A displaced Syrian boy sits in front of tents and makeshift homes at a refugee camp in Al-Hol, northeastern Syria, on Feb. 6, 2019.
Fadel Senna—AFP/Getty Images
By Hillary Leung

The head of the International Committee for the Red Cross (ICRC) said Tuesday that hundreds of children of Islamic State fighters should be reunited with their families and repatriated from the caliphate’s last holdout to their countries of origin, Agence France-Presse reports.

The children are among some 73,000 people currently housed in the Al-Hol refugee camp after U.S.-backed forces cleared out the last ISIS stronghold in Syria last month. The United Nations estimates that 92% of those displaced into the camp are women and children.

There are “certainly hundreds, maybe more” children without their parents at the camp, according to Peter Maurer, president of the ICRC.

“Our priority is to proactively look to bring kids back to their country of origin where there are hopefully still family if they are unaccompanied,” Maurer said, according to AFP.

After the identities of children are verified, the ICRC said it will notify governments in the children’s country of origin and try to determine whether there are relatives willing to take in the minors.

“I have seen the dire conditions and witnessed the efforts to manage the tens of thousands of people pouring into the camp,” Maurer, who spent five days in Syria last month, wrote in a statement. “The needs are huge and the camp is overwhelmed.”

“Dozens of children have died because of the cold and conditions in Al-Hol in the last weeks,” he added.

Last month, U.S.-backed forces declared victory over the Islamic State group in Syria, marking the end of a five-year campaign against the militants, who at one point had ruled a third of both Iraq and Syria.

As the caliphate collapses, governments around the globe are grappling with what to do about citizens who joined the militant proto-state.

At the Al-Hol camp, there are citizens of some 30 or 40 countries.

But Maurer said there appears to be little appetite to tackle the problem of foreign jihadists and their wives and children, according to AFP.

Last month, the newborn son of British teenager Shamima Begum, who joined IS when she was 15 years old, died in a refugee camp. The news came after Begum, whose citizenship was revoked, begged to be allowed back for the safety of her son.

President Donald Trump has also said he will not permit the return of a 24-year-old U.S.-born woman, Hoda Muthana, and her toddler.

France, however, has repatriated five orphaned children of IS jihadists, and said it would bring as many as 130 children back on a case-by-case basis. 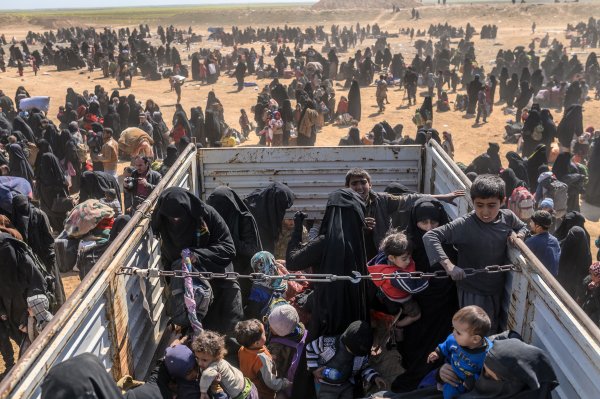 Civilians Stream Out of Last IS Enclave Before Final Assault
Next Up: Editor's Pick