'I'm Worn Out. I Am Wiped Out.' Meet the Scorching Dad Who Burnt the Internet to a Crisp With His Model Meme

If you’ve been perusing the web anywhere from Ghana to Australia this weekend, Twitter has likely directed your attention to the internet-anointed hot model dad.

People quickly developed an intense collective crush on Clint Hayslett, the dashing man striking a James Bond-like poses in a series of photos that caused massive heart and internet breakage.

“I’m wiped out. I’m worn out. I’ve never held my phone for so many hours. It’s very humbling and inspiring,” he told TIME.

It all began when at 45, this never more confident father decided to try a modeling career for a spin.

“My dad is 45, pursuing a modeling career, and I’ve never seen him happier. He told me he’s just waiting for a chance to blow up. So, Twitter, meet my dad,” the caption read.

The photoshoot burning up the internet was for Donahugh Eyewear. And Clint did it for free. The photographer Joshua Coleman snapped 3,500 pictures that day, and his son Collin knew how to use them.

The tweet his son Collin, a junior at the University of Toledo, posted to the tune millions of likes was a total surprise to his dad.

“I went away for a day, and I came back and they said, ‘well, look Dad,” he said. Best trip he ever took.

It didn’t just get people crushing. It got people laughing too when it inspired boatloads of hilarious memes.

Let’s get to point. He’s not on the market. And his wife is just amazed. “She’s my high school sweetheart. That’s the only one who really matters,” he said. This. Guy.

The major offers were not flowing in yet as of Tuesday morning, but the sunglasses company that he modeled for will create a pair of shades in his honor called “The Clint” with the number 45 to celebrate his age.

As for how to live life more charismatically, Hayslett has a message to deliver. “Be yourself, be confident, live right now, and everybody has something awesome that’s in them.”

He’s just the latest in a series of dads to charm the internet. As usual, it’s a great day for dads. 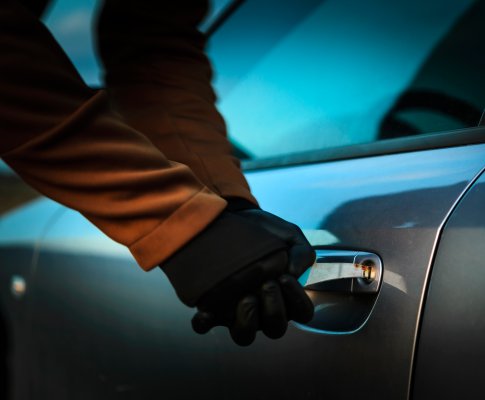 Viral Car Alarm Challenge Has Inspired a Lot of People to Do Their Best Automobile Impressions
Next Up: Editor's Pick