Alexandria Ocasio-Cortez won her seat in Congress after defeating a Democratic incumbent, so it’s not surprising that she’s now embroiled in a fight with the party Establishment over similar primary challenges.

In late March, the Democratic Congressional Campaign Committee announced that it would no longer work with consultants who are advising candidates who challenge Democratic incumbents.

As a protest to what she called a “blacklist,” Ocasio-Cortez raised more than $92,000 for Democrats in swing districts across the country over the weekend.

The fight gets at the heart of a rising conflict among the party’s left flank, which would like to replace both Republican incumbents and moderate Democrats with more progressive alternatives, and Establishment groups like the DCCC, which are more focused on keeping a Democratic majority.

On March 22, the Democratic Congressional Campaign Committee unveiled new standards for political vendors, announcing that in order to protect Democratic incumbents, “the DCCC will not conduct business with, nor recommend to any of its targeted campaigns, any consultant that works with an opponent of a sitting Member of the House Democratic Caucus.” The new standards also include diversity guidelines for vendors, and a mandate that they include unionized labor when possible.

But many Progressives saw the new standards as an attempt to strangle the new progressive organizations like the Justice Democrats and Brand New Congress, two groups that endorsed progressives Rep. Ocasio-Cortez and Rep. Ayanna Pressley in their races to unseat longtime Democratic incumbents. Both groups have said they plan to launch more primary challengers to Democrats in safe blue districts who they deem to be insufficiently progressive, a plan which has sent shock waves through the Democratic establishment.

The DCCC said it was simply looking to protect a “big tent” within the party.

“When Chairwoman Bustos was running to lead the DCCC, she stood up in front of her colleagues and made a promise to stand with and protect every Member of the most diverse caucus in Congressional history as we work to defend and grow our Democratic majority,” said DCCC spokesperson Cole Leiter. “This transparent policy follows through on that exact promise and will protect all Members of the Democratic Caucus — regardless of where they fall within our big tent.”

But other progressives argued that the DCCC rule would create a roadblock for fresh faces.

“If the DCCC enacts this policy to blacklist vendors who work with challengers, we risk undermining an entire universe of potential candidates and vendors — especially women and people of color — whose ideas, energy, and innovation need a place in our party,” Pressley told TIME. “When a candidate takes the risk to run, Democrats should not be in the practice of creating litmus tests or roadblocks that have a chilling effect on new candidates or those who would invest their sweat equity in support.”

“The DCCC’s new rule to blacklist + boycott anyone who does business w/ primary challengers is extremely divisive & harmful to the party,” Rep. Ocasio-Cortez tweeted Saturday night. “My recommendation, if you’re a small-dollar donor: pause your donations to DCCC & give directly to swing candidates instead.” She then went on to tweet links to the fundraising pages for three newly elected Democrats candidates running in swing districts: Reps. Mike Levin and Katie Porter in California and Rep. Lauren Underwood in Illinois. On Sunday, she sent out an email urging her supporters to donate to Levin, Rep. Jahana Hayes in Connecticut and Rep. Katie Hill in California. By Monday, those three candidates had raised more than $92,000.

The push to help candidates in swing districts is a shift for Ocasio-Cortez, who has mostly focused on boosting her progressive allies, mostly from solidly liberal areas. Not all of the candidates she supported over the weekend are in lockstep with her on policy issues: Hill, Porter and Underwood have not signed on as co-sponsors of Ocasio-Cortez’s Green New Deal, and Underwood has said she wants to defend and repair the Affordable Care Act rather than push for Medicare for All.

“We were very appreciative of the support, and she helped get us to our fundraising goal,” said Underwood’s campaign manager Ronnie Cho, adding that other members of Congress also helped her reach her goal.

But despite the fundraising haul, the Ocasio-Cortez endorsement may actually create problems for Democrats running in swing districts. In a press release Monday, the National Republican Campaign Committee slammed “California’s own socialist Democrat, Katie Hill,” adding that “Hill, like Ocasio-Cortez, has no problem kicking Californians off their private health insurance and replacing it with Medicare for All.”

By Monday, Rep. Ro Khanna, a progressive House Democrat who has been critical of the new DCCC policy, floated a potential compromise: maybe, he told reporters, the DCCC should only ban strategists who worked against Democratic incumbents in swing districts. But a DCCC insider told TIME that the rule is unlikely to change in any way. 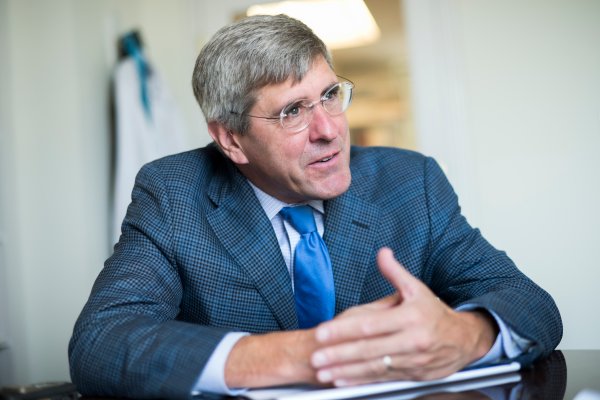