Netanyahu Is Running for Re-Election as ‘Mr. Security.’ But His Strategy in Gaza Might Be His Achilles Heel

Damaged houses are seen after a rocket hit the village of Mishmeret on March 25, 2019. Seven Israelis were reportedly injured in rocket fire from the Gaza Strip.
Faiz Abu Rmeleh—Anadolu Agency/Getty Images
By Joseph Hincks / Mishmeret, Israel

The pastoral village of Mishmeret in central Israel, with a population around 1,000, seems an unlikely warzone. Birdsong is louder than traffic, and the cyprus-lined streets mostly lead to farmhouses growing tomatoes, habanero peppers, and flowers for export overseas. But on March 28, British-Israeli Robert Wolf ducked under a blue tarp cordoning off the remains of his family home, a pile of collapsed wood and broken concrete, and surveyed the damage wrought by a rocket that crashed through his roof March 25, some 75 miles from where it was fired in southern Gaza.

“This is a quiet place. Normally you don’t hear of anything happening here,” Wolf, 60, tells TIME after the attack. But three days ago “our whole lives changed.” Had his son not fallen asleep on the couch with the window open enabling him to hear an early morning warning siren, Wolf says, he would have lost not only his home but the six members of his family who along with him were injured in the blast.

It’s a fear that hangs over many in Israel, which lives “under genuine, incredible existential threat” from Hezbollah, Iran, Hamas and other militant groups, according to Yohanan Plesner, President of the Israel Democracy Institute (IDI), an independent research center based in Jerusalem. As Israelis prepare to vote on April 9 in the most closely-watched election in years, the rocket that hit Wolf’s home has raised fresh questions over Prime Minister Benjamin Netanyahu’s handling of Gaza, and cast doubt on the “Mr. Security” image he has long cultivated.

Cross-border tensions have been ticking up over the past year, but the rocket that collapsed Wolf’s central Israel home on March 25 marked a new escalation, striking only 11 days after two others flew towards Tel Aviv for the first time since 2014. In response to the Mishmeret attack, the military closed border crossings, sent two brigades to southern Israel, and prepared to call up thousands of reservists, raising fears of a land incursion. The last such conflict, in 2014, left about 2,200 Palestinians dead, more than half of them civilians. On the Israeli side, 67 soldiers were killed along with six civilians, according to the U.N.

Saturday also marked one year since the start of the “March of the Return” protests, at which thousands of Palestinians have gathered weekly at the frontier between Gaza and Israel to protest dire living conditions and call for the right to return to ancestral homelands. Israel says the demonstrations are cover for Hamas terrorist attacks and its soldiers have killed around 200 Palestinians and shot 6,000 unarmed demonstrators since the border demonstrations began. The anniversary march on Saturday, attended by 40,000 people, had been seen as a potential flashpoint for further escalation but the IDF said Hamas exercised “restraint not seen in the past year.” Still, IDF soldiers fatally shot four demonstrators, and hours after Israel re-opened Gaza’s borders Sunday, five more rockets were fired from the Strip. No Palestinian group has claimed responsibility for the rockets, but Israeli tanks later shelled Hamas positions.

Israelis are watching events in Gaza unfold just as Israel’s election campaign approaches its final stages. Netanyahu, who has been in power for three consecutive terms since 2009 and also led Israel from 1996-1999, is hoping to surpass Israel’s founder David Ben-Gurion as the longest serving prime minister in the country’s history. But he is facing serious headwinds. In late February, Israel’s Attorney General said he would indict the prime minister on bribery, fraud and breach of trust charges, pending hearings. Netanyahu has also risked the support of moderate Israelis by fostering a deal between his far-right coalition partners and the extreme right Otzma Yehudit (Jewish Power) party, so as to boost both’s chances of passing the 3.5% of the vote threshold required to enter the Knesset. The move prompted rare criticism from AIPAC, America’s largest pro-Israel lobbying body, which called Otzma Yehudit “racist and reprehensible.”

“There are so many things to be disgusted by”, says Yossi Mekelberg, an Israeli politics expert at London-based think-tank Chatham House, “it’s really whether the electorate has reached a point where enough is enough.”

In 2015, Netanyahu swept to victory on the back of a campaign focused on security, and rallied his base by stoking fears of Arab Israelis voting “in droves” for the opposition. (Arabs make up about a fifth of Israel’s total population.) While his 2019 campaign has also drawn accusations of incitement against Israel’s Arab minority, repeating the same trick on security presents a challenge—this time, he is up against an emblem of the defense establishment.

Former IDF Chief of Staff Benny Gantz—who has campaigned for “national reconciliation instead of incitement“—is running near level with Netanyahu in recent polls. He has recruited two other retired IDF generals to the centrist alliance he formed with former finance minister Yair Lapid, including hawkish former defense minister Moshe Ya’alon. While the incumbent has attempted to portray Gantz as “insane”, “unstable” and a weak “leftist”, his battlefield experience and Netanyahu’s lavish praise for his rival pre-election means few accusations have stuck. Gantz quickly claimed the recent escalation showed that Netanyahu, who has also been Israel’s defense minister since last December, had sacrificed the country’s “deterrence” against Hamas.

Some security experts echo criticisms of Netanyahu. Retired IDF Brigadier General Shlomo Brom, now head of the Israeli-Palestinian relations program at the Institute of National Security Studies says that Netanyahu has procrastinated rather than advancing a coherent strategy on the Gaza Strip, coming up with “ad hoc responses to the problems of the moment.” Those include allowing Qatar to send cash to Hamas in order to stabilize Gaza, and working with the militant group at the expense of the Ramallah-based Fatah, which wants to achieve its vision of Palestinian statehood by political means instead of armed struggle. Netanyahu has made it clear there is no prospect of a Palestinian state under his leadership and allowed Israeli settlements to expand in the West Bank, which is under what Brom calls an “apartheid reality.”

Gantz may have an edge on Netanyahu in recent leadership polls, but the incumbent’s right wing religious block is still deemed more likely to win a majority in the Knesset. And although Gantz’s manifesto includes a vaguely worded commitment to “deepen the processes of separation from the Palestinians,” analysts say it’s not clear he has a coherent strategy either. “He doesn’t say much,” says Chatham House’s Mekelberg. “You have to assume things from his background, where he was born, certain things he says, and who are his political partners.” A January OpEd in Israel’s English-language newspaper Haaretz simply said: “Talk to us Benny Gantz.”

While the rocket attacks appear to have dented Netanyahu’s record on defense—in a poll conducted in their wake 54% of respondents said they were not satisfied with his handling of security, a jump of 15% on the previous survey—there’s no indication that will affect election outcomes, says IDI’s Plesner. In fact, voters who switch allegiance from Likud may be more likely to move further right judging by a separate poll in which more than half of respondents said the IDF’s response to the rockets had been too weak. Netanyahu’s education minister Naftali Bennet, of the recently-formed New Right party, has urged Israel to “open the gates of hell” on Hamas.

For now, it appears neither Hamas nor Netanyahu want escalation. But human rights groups say the status quo is also desperate. On March 17, the U.N. condemned Hamas for cracking down on Gaza’s “long-suffering people” after hundreds had demonstrated under slogans like “Revolt of the hungry.”

Beside the wreckage of his collapsed house, Wolf dismissed the far right’s bellicose rhetoric, saying he was against a response that would lead to the loss of more civilian lives in Gaza and Israel. He spoke of his anger at Hamas, his determination to rebuild, and how friends from Israel’s Jewish, Arab and Druze communities had comforted him after the destruction of his home. But Israelis should think carefully about the security situation before they vote on April 9, he said: “There’s a saying, it’s better the devil you know than the devil you don’t. Well, it’s not true. Sometimes you might as well take a risk.” 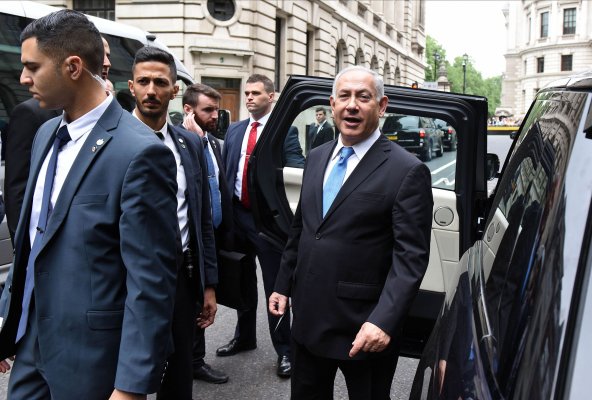 The Israeli Election Won't Change the Country's Strong Position in the Middle East
Next Up: Editor's Pick