While it is hard to imagine that Game of Thrones needs to remind people to tune in for its final season, the HBO series is not above sending a not-so-subtle reminder to fans to watch the show’s season premiere. That reminder? They set the Bellagio fountains on fire.

To build some buzz for the show’s already buzzworthy return, Game of Thrones left Westeros for the Las Vegas, taking over the world-famous Bellagio Fountains to put on a special show. Fans lined up around the landmark to watch as winter came to Las Vegas. As tourists gawked, Lake Bellagio transformed into an 800-foot-long water wall, rising up to remind fans of the wall that was meant to keep the White Walkers out of Westeros. The jaw-dropping wall of water became a canvas as the imaginative creators projected falling snow, the infamous Game of Thrones logo, and filled the night with silhouettes of the dragons breathing orange and blue flames. The Night King even made an appearance and water jets formed the shape of a crown and throne, setting the stage for the final showdown for the Iron Throne. It was all set to a soundtrack created by the show’s award-winning composer Ramin Dhawadi.

That wasn’t the end of the spectacle, though. For the first time in hotel history, the water was set on fire, The Associated Press reports. The special fountain show will go off nightly through April 13, the night before the series premieres its eighth and final season on April 14. 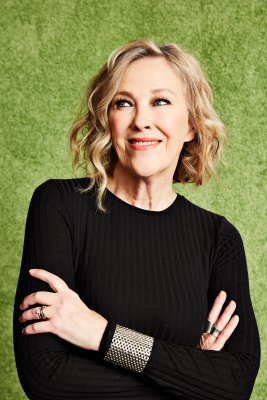 Catherine O’Hara Finds Humor in the Gulf Between Perception and Reality
Next Up: Editor's Pick