A Boxer Forcefully Kissed a Sports Reporter Live on Air. Now She Says He Also Groped Her

A female reporter who was kissed forcefully by a boxer after they finished an interview has said the athlete also grabbed her buttocks without her consent.

Vegas Sports Daily reporter Jennifer Ravalo interviewed boxer Kubrat Pulev on March 23 following a fight in Costa Mesa, Calif. At the end of the interview, Pulev leaned in and kissed Ravalo on the lips. Video footage of the kiss, which features Ravalo saying “thank you” to Pulev amid an uncomfortable laugh went viral. “Jesus Christ,” she says toward the end of the video.

On Monday, Pulev tweeted a statement in which he claimed that Ravalo is a friend of his and that “after the interview, I was so elated, I gave her a kiss.” He said he saw Ravalo later at a post-fight celebration. Pulev did not immediately respond to a request for comment.

Ravalo strongly denied Pulev’s claims in a press conference held Thursday with the high-profile attorney Gloria Allred. She said she met Pulev for the first time on March 22, when she asked him to do a pre-fight interview. They met again the next day for a post-fight interview, during which he grabbed her face, kissed her and later allegedly groped her backside.

“I was immediately shocked and embarrassed, and didn’t know how to respond,” she said. “Next, I walked to the table to put my items in my backpack. He grabbed both of my buttocks and squeezed with both of his hands. Then he walked away without saying anything to me and laughed.”

Ravalo said she attended an after-party later on the invitation of a friend. Pulev arrived at the party toward the end of the night, she said, where he asked her to take the kiss out of the interview.

“I did not remove it and instead posted it because I wanted people to see what he had done to me. I wanted him to be accountable,” she said during the press conference. “I didn’t want him to get away with it. What he did to me was disgusting. I felt humiliated. No woman should be treated this way. Mr. Pulev and I were not friends and we were not in a romantic relationship. He had no right to kiss me.”

Allred, who Ravalo hired to help her “impose consequences” on Pulev, has requested the California State Athletic Commission revoke the boxer’s license and investigate the incident. The commission will meet next in May, and Allred asked that it review Ravalo’s case and allow her to testify.

In a statement, the California State Athletic Commission said it takes the incident seriously.

“On Tuesday, Kubrat Pulev was notified that, before he will be licensed to fight in California again, he must appear in front of the commission and demonstrate that he conforms to this principle of respect,” the statement read. 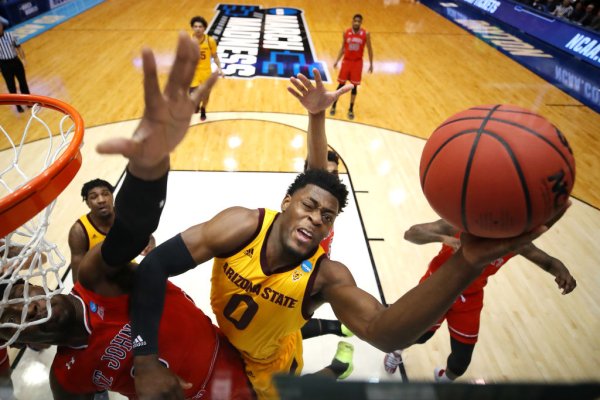 None of Our 10 Million Computer Generated March Madness Brackets Are Still Perfect
Next Up: Editor's Pick