A stock photo of a US Healthcare / Health insurance application form. A federal judge struck down blocked work requirements for people on Medicaid in Kentucky and Arkansas on March 27, 2019.
Getty Images/iStockphoto
By Abigail Abrams

Efforts in several states to require Medicaid recipients to work, study, volunteer or search for a job have stalled amid court challenges and questions from lawmakers, but the Trump Administration vowed to continue approving similar work requirements.

A federal judge blocked work rules in Arkansas and Kentucky on Wednesday, finding that the Department of Health and Human Services was “arbitrary and capricious” in approving the plans because it did not consider how they would affect Medicaid’s core purpose of providing health care to the needy.

“Everyone on Arkansas Works can go to bed tonight knowing that tomorrow they’ll be able get the healthcare they need to work and live a full life,” Kevin De Liban, an attorney for Legal Aid of Arkansas who worked on the case against his state’s program, said after the ruling.

The decisions were the latest speed bump in the Trump Administration plan. New Hampshire’s work requirements were recently challenged in court. Bills proposing work requirements recently died in West Virginia and Wyoming, and shortly after the decision, similar bills stalled in the Idaho and Iowa legislatures.

Arkansas was the first state in the country to implement these work requirements last June, after the Trump Administration reversed an Obama-era stance and said it would allow states to tie Medicaid benefits to work or “community engagement activities.” In the first seven months of the requirement, 18,000 people lost health coverage for not meeting the rules or failing to report that they had complied.

The twin opinions from Judge James Boasberg of the U.S. District Court in Washington D.C. struck down for a second time Kentucky’s plan to require Medicaid recipients to work or volunteer in exchange for health care and said that Arkansas’s rules, which are already in effect, “cannot stand.” Boasberg did not rule out the whole idea of Medicaid work requirements, however.

And federal officials are not backing down. The Trump Administration has now allowed six other states to introduce work requirements and seven more are waiting for approval. Seema Verma, the administrator of the Centers for Medicare and Medicaid Services, who has championed the work requirements, said on Wednesday that she remains committed to her goals.

“We will continue to defend our efforts to give states greater flexibility to help low-income Americans rise out of poverty,” Verma said. “We believe, as have numerous past administrations, that states are the laboratories of democracy and we will vigorously support their innovative, state-driven efforts to develop and test reforms that will advance the objectives of the Medicaid program.”

Arkansas Gov. Asa Hutchinson said on Thursday that while his state would immediately stop applying the work requirement to residents, he was urging the Department of Justice and HHS Secretary Alex Azar to appeal Boasberg’s decision.

“I remain fully committed to a work requirement and we are in this for the long haul because we believe it is the right policy for Arkansans who want to work and need more training and more opportunity,” Hutchinson said at a news conference.

In Kentucky, where Gov. Matt Bevin has threatened to end a Medicaid expansion if the requirements did not prevail, Adam Meier, secretary of the state’s Cabinet for Health and Family Services called the decision illogical and also suggested the state would fight the ruling.

“We believe that we have an excellent record for appeal and are currently considering next steps,” Meier said in a statement. Kentucky was the first state to obtain permission to add work requirements in January 2018, but Boasberg, an Obama appointee, stopped the state in June just days before it was set to implement the rules. The judge’s rationale then was very similar to the explanation he gave this week, as Kentucky won re-approval from HHS with very few changes to its plan.

Both Kentucky and Arkansas aimed their plans at the thousands of working-age, low-income adults who became eligible for Medicaid expansion under the Affordable Care Act. In Arkansas, the plan required that Medicaid enrollees between the ages of 19 and 49 perform at least 80 hours of work or other activities, such as school, volunteering or job searching, each month.

People who do not comply for any three months in a calendar year lose their Medicaid and are locked out until the following year. 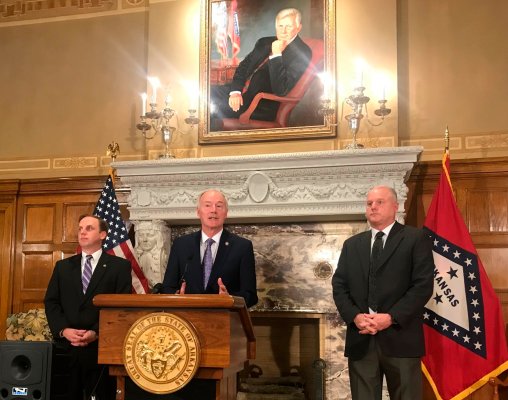 Should You Have to Work to Get Medicaid? Some Red States Say Yes
Next Up: Editor's Pick