'Better Than Okurr.' Local News Station Hilariously Squeezes All the Slang Into One 'Lit' Segment for Teens

Students who attend Toledo Public Schools have to take standardized tests this week. In an apparent act of solidarity, support and encouragement, their local news anchors tried to capture their attention in an interesting way: by adopting their vernacular, including “turnt,” among other words.

The anchors of CBS affiliate WTOL 11 in Toledo, Ohio, used all the current slang in the 37-second news segment, which featured anchors Melissa Andrews and Tim Miller, as well as weather reporter Chris Vickers and traffic reporter Steven Jackson.

“I cannot believe this is real,” wrote the Twitter user who shared the now-viral video on Wednesday.

Andrews kicked off the segment: “It is testing week and it’s time to slay all day.” Miller responded with, “Yeet! Stay woke, be on fleek and get that Gucci breakfast.”

But the slang terms didn’t end there. The entire clip features popular youth phrases with each line. “Goals! Say ‘Bye Felicia’ to that testing stress. Weather’s gonna be turnt,” Andrews said, segueing the clip to the weatherman, who said the weather in Toledo would “yas” indeed be “lit.”

The traffic on the roads would be better than just “okurr,” reported Jackson. “Fomo won’t be an issue,” he said, reminding students how important it was for them to get to school on time this week.

With 4.5 million views as of Thursday morning, it’s clear the kids of Toledo are prepared for their “one hundo p chance of success,” as Vickers phrased it. 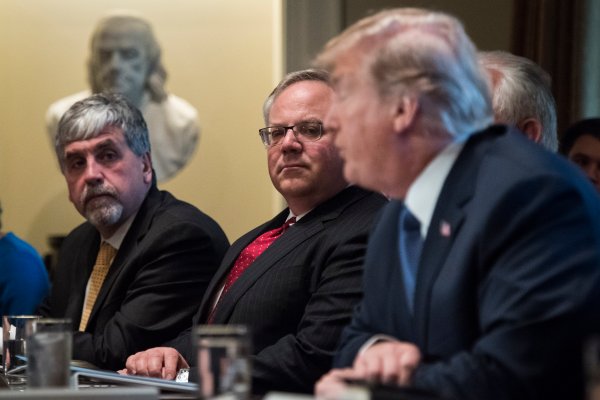 Why the 'Swamp Thing' Photobombed a Trump Nominee Who Used to Be a Lobbyist
Next Up: Editor's Pick