The Beach Bum Is the Opposite of a Bummer

McConaughey mugs with rapper friend Lingerie, played by none other than Snoop Dogg
Neon
By Stephanie Zacharek

The Beach Bum is barely a movie; it’s more of a joyous squiggle adorned with a paper cocktail umbrella, a “What did I just see?” dollar-store trinket. But in these dark times, it’s just the ticket. Matthew McConaughey is Moondog, a hedonist charmer and poet-genius who spends his days lolling about the Florida Keys, taking pleasure-boat excursions with topless cuties and hanging out with dolphin enthusiast and tour guide Captain Wack (Martin Lawrence, goofy and dazzling). But don’t think that Moondog, flopping about in his tropical shirts, more often than not clutching a cold can of Pabst, is a loser: He’s rich! Or, rather, he’s married to money in the form of beloved wife Minnie (a radiant, loopy Isla Fisher), who swans about her lavish Miami digs in platforms and drifty caftans.

Moondog and Minnie adore each other, even though they lead largely separate lives. They’re brought together by their daughter Heather’s wedding–she’s played by Stefania LaVie Owen–setting off a chain of events that, if you squint, vaguely resemble a plot.

But who needs structure? On the surface, The Beach Bum is an ode to goofball decadence, though what really makes it sing is its undercurrent of melancholy tenderness. Director Harmony Korine began his career in the late 1990s making corrosive, aggressively arty films (Gummo, Julien Donkey-Boy); he busted that mold with his exuberant, enjoyably tawdry 2012 Spring Breakers. The Beach Bum throws off an even more generous light, and McConaughey is its tiki torch.

Moondog is having fun, but it’s time to knuckle down and make some poems. McConaughey, his limbs as happy and loose as noodles, embodies the spirit of intending to work. Our haute hobo swerves about drunkenly, his most precious possessions–his books, a portable typewriter–stashed in the pillowcase slung over his shoulder. Every once in a while he’ll sit down, cross-legged, and tap out a few pages. Then it’s back to partying, because life is short. The Beach Bum is hardly a practical instruction manual for getting things done. But McConaughey’s Moondog reminds us that happiness is elusive, as fleeting as a stray breeze or a streak of sunlight. Bottoms up. 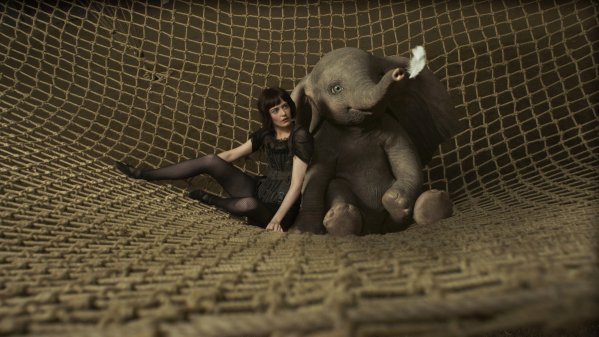 Review: A Baby Elephant Suffers—and So Do We—in Tim Burton's Dumbo Remake
Next Up: Editor's Pick