Mueller Offers a Lesson in the Power of Reason Over Passion

Almost a century ago, in the aftermath of the First World War, the journalist Walter Lippmann, then 32 years old, published an influential and disturbing critique of democracy and its future. The mood in the U.S. was anxious–about immigration, about race, about women, about the nation’s role in the world, about civil liberties, about religion, even about science (the Scopes trial was a few years off). The 1920 Census had found that more Americans now lived in cities than on farms, and the broad introduction of commercial radio at around the same time was reshaping the nation’s media landscape; such forces had helped lead to the founding of a second, widely popular Ku Klux Klan–a movement designed to protect Anglo-Saxon superiority in the face of shifting demographic trends. It was, in short, a time not wholly unlike our own.

Into this climate came Lippmann’s book Public Opinion, which argued that the complexity of the changing world made true perception and genuinely popular self-government impossible. Skeptical about the capacity of democracy to arrive at wise decisions, Lippmann proposed a system of bureaus of experts who would gather facts and present analysis to guide deliberations about public affairs–a populist’s nightmare come to life. The book can be hard going, and Lippmann’s conclusions are excessively Olympian, but his analysis of the limitations of the political mind resonate today. “We do not first see, and then define,” he wrote, “we define first and then see.”

Put another way, we tend to assess events not in the light of reason but with the flames of partisan passion. What we make of a given moment is governed less by merits and details and more by the mores and demands of our particular political tribe.

This is the great fact of our time, and it couldn’t be more relevant in the post–Mueller report universe. Reason compels opponents of Donald Trump who so hoped the investigation would bring him down to accept the report’s apparent conclusions. Reason too should lead Trump supporters who have long denounced Robert Mueller to acknowledge that the probe they believed a witch hunt was in fact a legitimate inquiry.

Neither, of course, is likely to follow this counsel, and therein lies the stubbornness of the problem Lippmann identified nearly 100 years ago. We can, Lippmann wrote, “best understand the furies of war and politics by remembering that almost the whole of each party believes absolutely in its picture of the opposition, that it takes as fact, not what is, but what it supposes to be the fact.” Jane Addams, a paragon of the Progressive Era, made a similar point, observing, “We know instinctively that if we grow contemptuous of our fellows, and consciously limit our intercourse to certain kinds of people whom we have previously decided to respect, we not only tremendously circumscribe our range of life, but limit the scope of our ethics.”

I’m not naive about the prospects for a new Age of Enlightenment to come and rescue us from tribal impulses, not least because even the Age of Enlightenment had to find ways to manage, not repeal, the perennial tension between reason and passion. “In every free and deliberating society, there must, from the nature of man, be opposite parties, and violent dissensions and discords,” Thomas Jefferson wrote in 1798, “and one of these, for the most part, must prevail over the other for a longer or shorter time.”

Partisanship is not intrinsically bad. To Jefferson, what was worth seeking to avoid, then and now, was reflexive, not reflective, party spirit. “I never submitted the whole system of my opinions to the creed of any party of men whatever, in religion, in philosophy, in politics, or in anything else where I was capable of thinking for myself,” he wrote in 1789. “Such an addiction is the last degradation of a free and moral agent. If I could not go to heaven but with a party, I would not go there at all.”

Subsequent generations have quoted these lines–especially the last sentence–as a way of suggesting that partisanship is anathema to the American spirit. That’s not quite right, and it sets an impossible standard for the present. It’s more useful for our current moment to recall that Jefferson also wrote this: “Men have differed in opinion, and been divided into parties by these opinions, from the first origin of societies; and in all governments where they have been permitted freely to think and to speak. The same political parties which now agitate the U.S. have existed through all time.” The questions that defined American politics, Jefferson added, were the same kinds of questions “which kept the states of Greece and Rome in eternal convulsions.”

So what to do in our time of entrenched polarization? We must give reason a chance. We can’t guarantee the triumph of fact over conviction; in Lippmann’s terms, we will never be able to always see and then define. But we should at least try to give fair play a place in the arena, and in the trying, we may just find that evidence will have the power to change minds rather than simply affirm what we already believe to be the case.

Experience and history can help us; both can be orienting forces. “When the mariner has been tossed for many days in thick weather, and on an unknown sea, he naturally avails himself of the first pause in the storm, the earliest glance of the sun, to take his latitude, and ascertain how far the elements have driven him from his true course,” said the American statesman Daniel Webster in 1830. “Let us imitate this prudence, and before we float farther on the waves of this debate, refer to the point from which we departed, that we may at least be able to conjecture where we now are.”

It is at least a beginning. “Reason is not a Thing, or a Person, much less a God,” wrote the 20th century British historian Sir Michael Howard. “It is an activity, and a highly individual one. It is people thinking and judging: more, it is individual persons thinking and judging. Neither is History a Thing: it is what people think, write and believe about the past. A knowledge of the past is essential in making political or moral judgments, but ‘History’ as such does not judge. That is done by people; and best done by people free to think, read, inform themselves and debate before they decide; and having decided, be free to change their minds.”

To do so requires the willingness to think before we decide, and to weigh before we weigh in. “Every man whose business it is to think,” Lippmann observed in Public Opinion, “knows that he must for part of the day create about himself a pool of silence.”

Whether staring at the news feed on our phones, or cable news in a corner bar, too few among us manage to heed this counsel. But since it’s the business of every citizen to think, we all must find world enough and time to assess rather than to agitate. The President could learn from this; so can the rest of us.

Meacham is a Pulitzer Prize-winning historian and the author, most recently, of The Soul of America: The Battle for Our Better Angels 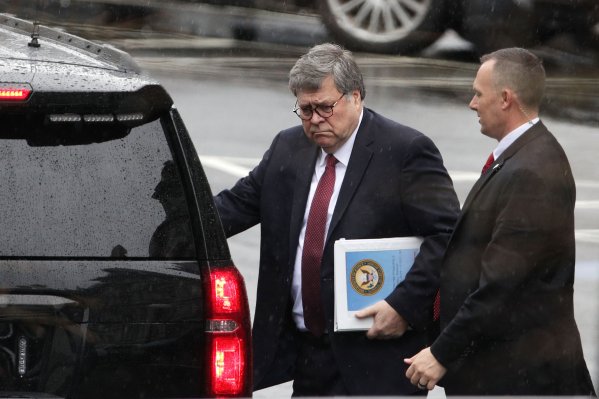 Everyone Got to Read the Starr Report on Bill Clinton. Here’s Why the Mueller Report May Not Get the Same Treatment
Next Up: Editor's Pick