‘I Am Doing This for Every Place Where Rape Is a Weapon of War.’ Meet the Woman Documenting Sexual Violence Against Myanmar's Rohingya

Razia Sultana, a Rohingya lawyer and advocate, speaks during a press conference in Ottawa, Canada on Sept. 20, 2018.
Sean Kilpatrick—AP
By Laignee Barron

When Rohingya refugees began fleeing into Bangladesh in 2016 and 2017, lawyer and activist Razia Sultana found herself on the frontline of a sexual violence epidemic.

The Myanmar military, in its scorched-earth campaign against the Muslim minority, laid waste to entire villages, carried out massacres and lined up women to be raped, according to U.N. investigators, who have called for the alleged crimes to be prosecuted as genocide. As the exodus swelled to more than 770,000, Razia Sultana got to work documenting the violence.

Born in Maungdaw, Myanmar, Razia Sultana grew up in Bangladesh where she has worked for the Rohingya community as an educator, campaigner and interpreter. After interviewing hundreds of rape survivors, she established the Rohingya Women’s Welfare Society to provide counseling and respond to issues of domestic violence, child marriage and women’s health. Last year, she testified before the U.N. Security Council, and on March 7, the State Department honored her with a prestigious International Women of Courage Award.

She spoke with TIME by phone shortly after receiving the award in Washington, D.C.

Caution: The below interview contains graphic material that may be distressing to some readers.

How did you start documenting sexual violence against Rohingya women and girls?

After the 2016-2017 refugee influx it was just crazy. I had to help the women. They were sharing with me their experiences of being raped, being mutilated and watching their loved ones be killed or beaten because they were not very comfortable speaking with the men.

What prompted you to start writing reports about it?

In 2014, my friend gave me a report about the Burmese army’s use of violence as a sexual weapon called “License to Rape.” Then in 2016, when the Rohingya refugees came fleeing into Bangladesh, it was a surprise for me to hear the extent of the violence experienced. I was helping translate some interviews for [Rohingya media organization] Kaladan Press and after a few of these interviews it became clear to me that most of the women had faced sexual violence, abuses, harassment and rape. I told my editor, “We need to do a report like ‘License to Rape.’ And he said, “Ok, can you do it?”

Do the women want this sexual violence documented?

Some women are very angry and say, “Why are we hiding this?” Some are brave. Some have chosen to keep quiet.

It has been difficult for me also. After some of the interviews I have had nightmares. Sometimes I just cry and cry and I don’t even know why. Sometimes I need to get out of Cox’s Bazar because I feel so sad. I went to my doctor and he asked me, “What is it that you want to do?” And I told him that I want to help my people. And he said, “Ok, you must be strong then.”

Within the Rohingya community, how openly is this issue discussed?

There is a lot of shame. The women are concerned about their family’s reputation. They have a fear of going to the doctor. They are afraid of even being seen going to a doctor.

In 2016, one of the women I was taken to speak with was an unmarried young girl. She couldn’t even move, she was bleeding everywhere. I asked my source how could you bring me here and not just take her to the doctor?

How supportive are the families?

Some husbands and families are good, but some families don’t accept their wives or unmarried daughters who have been raped. You can say it’s 50-50. So many women are not expressing their situation even after they find out they are pregnant. We have found 5 or 6 babies in the dustbin.

How did you determine that the sexual violence was systemic, or as your report says, that “rape by command” was happening?

It’s an old tactic of the Myanmar Army in ethnic areas. First they target the women and then the people will leave. Rape as a war tactic is meant to create fear. People see the military taking their girls, so they think we don’t need our houses, we need to save our girls and our family’s reputation. So they leave their houses. They leave their land. They leave their country.

The violence is clearly not about individual sexual desire. This is a group effort. They are lining up women young and old and raping them. In 2016, while compiling my report “Witness to Horror,” I met a 14-year-old girl who was raped by more than 30 soldiers. The army is cutting women’s breasts off, gouging out their eyes. This is not just rape. This is a weapon to punish the community.

Rape tends to be one of the most under-reported war crimes. What do you hope to change by bringing attention to its use against Rohingya?

I am doing this for every place in the world where rape is a weapon of war, not just Myanmar, but also Sri Lanka, Bosnia, Ghana and others. We want justice. There must be an international law. Armies must be held accountable. How in the 21st Century are women still facing this level of violence without any [recourse] to accountability?

Aung San Suu Kyi shocked many in the West by continuing to stand with the military rather than condemning the atrocities. What do you make of this?

This is very complicated for me because we struggled for her, so why is she quiet about our suffering? She is also responsible for what has happened. Sure, she has no power. She is a puppet of the army government. But still, she is the democratic leader, so it is her responsibility to know what is happening inside her country. The army is killing innocent people and she says she knows nothing? Maybe she is afraid to raise her voice because she was imprisoned and now that she got her emancipation she doesn’t want to lose power.

What is life like for Rohingya women who fled to Bangladesh and are now living in the world’s largest refugee camp?

It’s a jail. The women can’t move around, they can’t get much access to health care, or to education. It’s not a life. They cannot even go outside their tents, which are not even real tents, they are temporary shelters. Rohingya society is very conservative, so when there is no fence, no privacy, the women just stay inside, cooking, dreaming of their previous life.

At night, the women face security problems going to the toilet. They can’t go alone. There is a lot of harassment, which is just more mental torture for them.

They have nothing to do in the camps. One day is like one year. Inside the camps, they have no future and are living like animals.

The youth especially, are depressed, with no jobs, no education. So they are vulnerable to traffickers, who promise jobs, marriage, anything.

What could the international community, countries like the U.S. be doing?

We need the International Criminal Court to investigate and put pressure on the Myanmar government and military to stop the atrocities. Myanmar does not have the right to make an entire community stateless. And secondly, the Rohingya are not just Bangladesh’s burden. The whole international community needs to step up to this problem.

America has still not accepted that what is happening to the Rohingya is genocide and that the sexual violence against women is part of that genocide. Strong economic sanctions could maybe change some things because all the big Myanmar companies are owned by the military. America could do this, and could revoke the rights of the military and the military’s children to go to the U.S.

We need to rebuild our political agenda and our political voice. The U.N. and Bangladesh are always proposing solutions for the Rohingya. But the Rohingya issues need to be solved by Rohingya. The community knows what’s best. We need to organize the political representation, and establish a clear diplomatic position. Previously, I did not want to be a politician, but now I see it as necessary. We have many capable leaders who can express our agenda. I can help. I can be part of that political group. 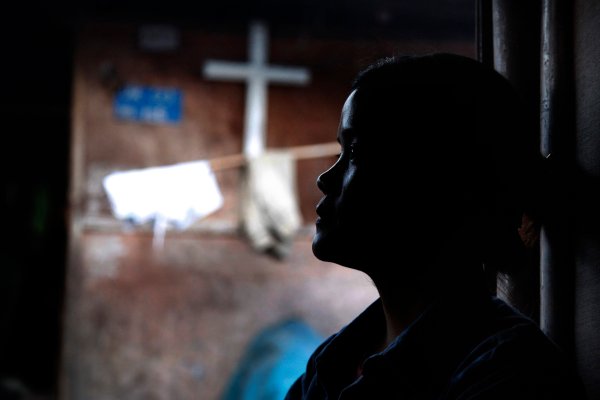 China's Shortage of Women Has Led to Human Trafficking
Next Up: Editor's Pick