The Pentagon may face long-term negative effects by defying Congress to fund construction for a wall along the Mexican border, but Acting Defense Secretary Patrick Shanahan is going ahead with it anyway.

The Defense Department notified Congress its intention to transfer $1 billion in funding to go toward building 57 miles of fencing, roads and other measures on the southwestern border.

It’s an unprecedented tactic to notify Congress about moving the money around, rather than request the transfer. The decision will likely cost the Pentagon its ability to “reprogram” money in the years ahead, which will hamper its ability to react quickly to military needs.

“By unilaterally reprogramming, it was going to affect our ability long-term to be able to do discretionary reprogramming that we had traditionally done in coordination,” Shanahan told the House Armed Services Committee on Tuesday. “We understand the significant downsides of losing what amounts to a privilege.”

He added that the Pentagon was simply executing a “legal order from the commander-in-chief” President Donald Trump, who declared a national emergency at the border in February.

On Monday night, Shanahan authorized the U.S. Army Corps of Engineers to spend up to $1 billion in support of the Department of Homeland Security and Customs & Border Patrol to build 18-foot-high pedestrian fencing, roads construction and lighting installation within the Yuma, Ariz. and El Paso, Texas sectors of the border.

The Pentagon’s decision drew fire from Democrats and Republicans, alike, which see the move as a way for the Trump Administration to sidestep Congressional power of the purse. Earlier this year, Congress gave Trump funding to build just 55 miles of wall along the U.S.-Mexico border, but Trump declared a national emergency — a move that may allow him to access billions in federal funding without receiving Congressional approval. That decision was widely seen as a last-ditch “nuclear option” that will likely spark multiple legal challenges and fundamentally shake the balance of power in the federal government.

Rep. Adam Smith, chairman of the House Armed Services Committee, issued a formal letter to the Defense Department on Tuesday that “denies” the Pentagon request to transfer funding. However, it was symbolic because no request was made. Instead, the Pentagon told Congress what it was doing. “DoD is attempting to circumvent Congress and the American people’s opposition to using taxpayer money for the construction of an unnecessary wall, and the military is paying the cost,” Smith said.

To obtain the border funding, Pentagon officials played what amounts to a bureaucratic shell game. It took leftover money that was allocated for military personnel and transferred it into counter-drug account, which gives the military authority to take measures to support federal law enforcement efforts to stop drug trafficking.

“To look at the Pentagon as sort of a piggy bank/slush fund, where you can simply go in and grab money for something when you need it, really undermines the credibility of the entire” defense budget, Smith told Shanahan.

The Pentagon intends to take another $3.6 billion in military construction funds that have not yet been allocated to a specific contract. The military generally uses that money to fund construction projects, including family housing, building maintenance and infrastructure repair, both at home and abroad.

But both parties have lambasted the plan out of fears that projects in their home states will be targeted. At Congress’s request, the Pentagon sent a list of more than 400 military construction projects with a total cost of about $13 billion. Shanahan has said no military housing, barracks, or dormitory projects will be impacted. “We are solely looking at projects with award dates after September 30, 2019,” he said, adding: “Military construction on the border will not come at the expense of our people, our readiness, or our modernization.”

The military has been deeply involved in implementing Trump’s immigration policy in the past year. Since last fall, American forces have strung coils of razor wire atop southern border fences and points of entry with Mexico. The Pentagon now has about 6,000 troops, including 2,100 members of the National Guard, deployed on the current mission along the southwest border. The Pentagon is also on the hook to help shelter up to 5,000 migrant children crossing the U.S. southern border without a parent. The U.S. Department of Health and Human Services (HHS), the federal agency responsible for migrant children until they can be given to an adult relative, currently holds about 11,500 migrant toddlers, children and teens at U.S. government detention and processing centers across the country. 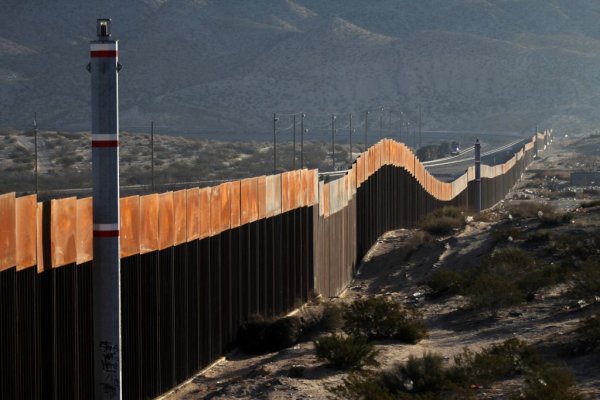