Michael Avenatti Has Been Charged With Trying to Extort Nike. Here's What We Know So Far

High-profile attorney Michael Avenatti was arrested and charged Monday in separate federal investigations, including one that alleges he tried to extort $20 million from Nike.

The United States Attorney of the Southern District of New York (SDNY) said the charges against Avenatti were “for attempting to extract more than $20M in payments from Nike by threatening to garner publicity to inflict financial & reputational harm if his demands were not met.”

Avenatti appeared in court Monday evening in New York. A federal magistrate judge ordered his release on a $300,000 bond in the case.

Following his court appearance on the extortion charges, Avenatti told reporters he will “never stop fighting that good fight.”

“I am highly confident that when all of the evidence is laid bare in connection with these cases, when it is all known, when due process occurs, that I will be fully exonerated and justice will be done,” he said.

In addition, the U.S. Attorney of the Central District of California announced Avenatti was charged Monday with federal bank fraud and wire fraud related to his legal practice there.

Avenatti’s law office did not immediately respond to TIME’s request for comment.

According to the criminal complaint from the U.S. Attorney in New York, Avenatti and an unnamed co-conspirator “used threats of economic and reputational harm to extort Nike,” with Avenatti specifically threatening to hold a press conference “on the eve of Nike’s quarterly earnings call and the start of the annual NCAA men’s basketball tournament.”

Avenatti also allegedly told Nike that he would not hold the press conference if the company agreed to pay $1.5 million to a client he claims “had information damaging” to Nike. Avenatti also allegedly demanded that Nike “retain” him and his co-conspirator for an internal investigation at a cost of at least $15 million to $25 million. Prosecutors further claim that if Nike did not agree to retain the pair, then they must pay them $22.5 million to resolve any claims from the client, “and additionally to buy Avenatti’s silence.”

“Calling this anticipated payout a retainer or a settlement doesn’t change what it was – a shakedown,” Berman said in a statement. “When lawyers use their law licenses as weapons, as a guise to extort payments for themselves, they are no longer acting as attorneys. They are acting as criminals, and they will be held accountable for their conduct.”

Berman also outlined the alleged timeline of events during a press conference Monday afternoon, showing a graphic that states Avenatti met with Nike on March 19, and accused the company “of involvement in the basketball bribery scandal unless Nike agrees to make multimillion-dollar payments to Avenatti.”

Berman said the company reported Avenatti’s alleged threats to the federal authorities later that day, and that Avenatti threatened the company on March 20 and 21, both privately and via Twitter.

Additionally, Avenatti tweeted on Monday around the time of his arrest that “Tmrw at 11 am ET, we will be holding a press conference to disclose a major high school/college basketball scandal perpetrated by @Nike that we have uncovered. This criminal conduct reaches the highest levels of Nike and involves some of the biggest names in college basketball.”

Nike said in a statement obtained by TIME after Avenatti’s arrest that “Nike will not be extorted or hide information that is relevant to a government investigation. Nike has been cooperating with the government’s investigation into NCAA basketball for over a year. When Nike became aware of this matter, Nike immediately reported it to federal prosecutors. When Mr. Avenatti attempted to extort Nike over this matter, Nike with the assistance of outside counsel at Boies Schiller Flexner, aided the investigation. Nike firmly believes in ethical and fair play, both in business and sports, and will continue to assist the prosecutors.”

Avenatti denied extorting Nike in an interview with CBS This Morning that aired Wednesday.

“Any suggestion is absolutely absurd,” he said. “Nike knew from the very first moment that I had any contact with Nike that I was insisting that the truth about what Nike had done be disclosed to federal prosecutors and investigators.”

Avenatti was also charged in a separate case out of California on Monday in a two-count felony complaint accusing him of wire and bank fraud.

In a press release, authorities in Los Angeles said Avenatti allegedly “embezzled a client’s money in order to pay his own expenses and debts — as well as those of his coffee business and law firm — and also defrauded a bank by using phony tax returns to obtain millions of dollars in loans.”

Specifically, prosecutors claim that Avenatti “negotiated a settlement which called for $1.6 million in settlement money to be paid on January 10, 2018, but then gave the client a bogus settlement agreement with a false payment date of March 10, 2018.” They claim the attorney then used the settlement money to fund his coffee business, Global Baristas US LLC, which operated Tully’s Coffee shops in California and Washington states, as well as for his own personal expenses.

Speaking about the case with CBS This Morning, Avenatti said the client accusing him of embezzlement, who has not been named, has an “extensive criminal background and rap sheet associated with his conduct.”

The client is “currently on felony probation” after being convicted on “multiple counts of obtaining money under false pretenses,” he said.

“According to the affidavit, Avenatti obtained the loans by submitting fabricated individual income tax returns,” prosecutors said in a statement. “Instead of the millions of dollars he claimed to have paid in taxes, Avenatti still owed the IRS $850,438 in unpaid personal income tax plus interest and penalties for the tax years 2009 and 2010, court papers state.” 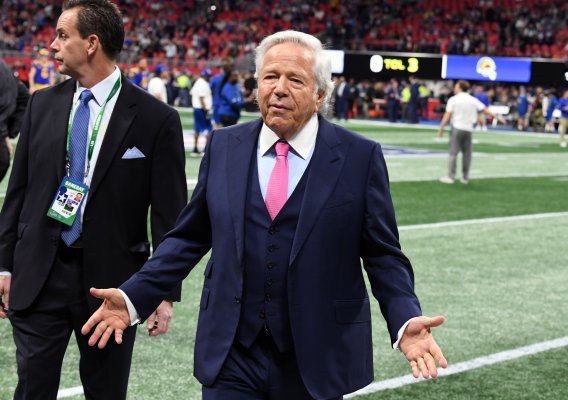 Robert Kraft Apologizes Amid Prostitution Scandal
Next Up: Editor's Pick