When Texan flight attendant Selene Saavedra Roman was assigned to work a flight to Mexico in February, she couldn’t have thought that the trip would be the start of a nearly six-week ordeal in ICE custody.

Saavedra Roman, 28, is a ‘dreamer’ or a Deferred Action for Childhood Arrivals program (DACA) recipient, having been born in Peru and entered the U.S. illegally when she was 3, according to the Washington Post. DACA recipients, who were brought to the U.S. before they turned 16 and have continued to reside in the country, are granted temporary protection from deportation and given work access.

Upon returning to Houston on Feb. 12, Saavedra Roman was stopped by authorities, placed into custody and sent to a privately-run Immigration and Customs Enforcement (ICE) detention facility in Conroe, Texas, where she remained for more than five weeks, according to the Association of Flight Attendants-CWA (AFA), a flight attendants’ union.

According to the U.S. Citizenship and Immigration Services (USCIS) website, DACA participants lose their coverage under the program if they travel outside the U.S. without first applying for “advance parole” (which also requires a fee of over $500). Following President Trump’s DACA order, USCIS has stopped considering any such requests.

Saavedra Roman’s lawyer, Belinda Arroyo, told the Washington Post that her client had not known those legal conditions, and had relied on Mesa Airlines, which had incorrectly told her she could leave the country.

Following her detention, Mesa Airlines and the AFA asked that the Trump administration and the Department of Homeland Security release Saavedra Roman.

“Our union is mobilizing and we will not stop fighting until Selene is returned home and all charges dropped,” said Sara Nelson, President of the AFA, in a joint statement with Mesa Airlines released on March 22. “We will fight with every tool at our disposal until justice is done, Selene is reunited with her husband and cleared of these outrageous charges.”

“We are deeply sorry Selene and her husband have had to endure this situation. It is patently unfair for someone to be detained for six weeks over something that is nothing more than an administrative error and a misunderstanding,” said Mesa Chairman and CEO Jonathan Ornstein in the same statement. “We are doing everything in our power to ask the administration to release Selene, and drop all charges stemming from this horrible situation.”

Less than 24 hours after a MoveOn.org petition was launched calling for her freedom, Saavedra Roman was released on Friday, according to the AFA.

“Being released is an indescribable feeling. I cried and hugged my husband and never wanted to let go,” said Saavedra Roman in a statement released by the AFA. “I am thankful and grateful for the amazing people that came to fight for me, and it fills my heart. Thank you to everyone that has supported. I am just so happy to have my freedom back.”

Reached for comment, a U.S. Citizenship and Immigration Services spokesperson told TIME that the agency could not comment on specific cases.

ICE did not immediately respond to a request for comment, though an ICE spokesperson told the Washington Post, that Saavedra Roman was released Friday “pending adjudication of her immigration proceedings,” and that it makes custody decisions on “a case-by-case basis.” 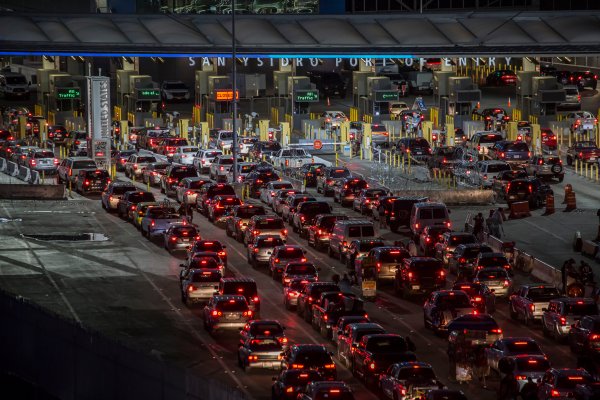 9-Year-Old U.S. Citizen Detained for 32 Hours by Border Patrol
Next Up: Editor's Pick